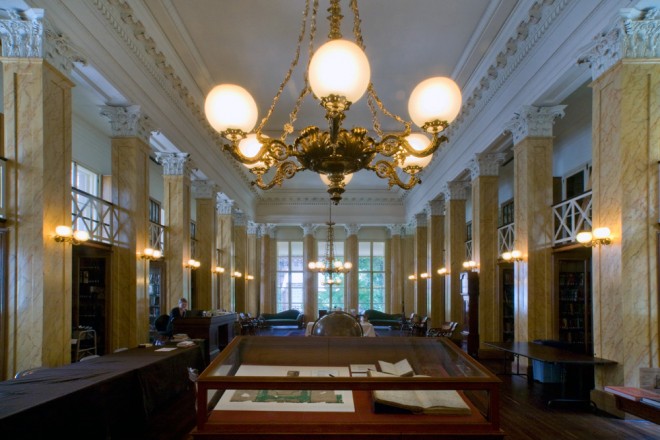 Since 1847, the Athenaeum of Philadelphia has stood quietly and stately on the eastern flank of Washington Square. Situated firmly between the Penn Mutual Life Building (1930) and the Dilworth House (1957), the Athenaeum predates both by a century—and contains architectural files on both, too.

Designed by John Notman, it’s one of the finest examples of the Italianate Revival style in the United States. Notman won a design contest whose participants also included William Strickland, John Haviland, and Thomas Ustick Walter. It was added to the National Historic Register in 1976.

The Athenaeum’s collections of books, manuscripts, architectural drawings, photographs, and historic objects attract scholars and researchers from Philly and afar; doing research is free but requires an appointment and a photo ID. Of course among Hidden City circles, a lot of the resources the Athenaeum makes available are online, at its highly valuable Philadelphia Architects and Buildings project.

Relatively reserved on the exterior, the rooms inside the Athenaeum are embellished by 24 foot ceilings, handsome pilasters, and lighting fixtures so elaborate they earned their own feature exhibition. A grand staircase connects offices, conference rooms, and a gallery downstairs, and the reference, research, and reading rooms upstairs. There’s also a chess room upstairs—and Hidden City is inviting you there with the art project Through the Pale Door. 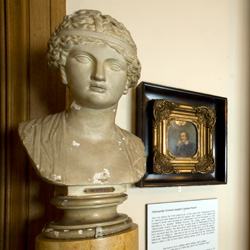 With our Festival, beginning today, Ruth Scott Blackson is turning the Athenaeum’s Chess Room into a shrine to Edgar Allen Poe. Poe visited the Athenaeum in 1838 at its previous location in the American Philosophical Society, where there was a statue of Minerva, the Roman equivalent of Athena (for whom the Athenaeum is named), whose alias was Pallas. Whether or not that was the bust of Pallas his raven perched upon above his chamber door is up for debate. It’s safe to think that Edward G. Pettit, the “Philly Poe Guy,” will argue in support of that at his lecture “Edgar Allan Poe, His Legacy, His Body” next Thursday, May 30, held in conjunction with the Festival. Either way, it’s worth noting that The Raven was published in 1845, the same year Notman won the Athenaeum’s design competition. The bust in question now resides in the Athenaeum’s Chess Room, next to a portrait of Poe by the artist Henry Inman.

One of the more curious items in the Athenaeum’s collection is a book analyzing the paint colors in the historic Poe House at Seventh & Spring Garden: it’s curious because it has no colors. It’s this oddity that inspired Blackson to create a complementary book with colors, based upon the Munsell color system. She’s also curated a collection of books and items associated with Poe that will be on display for the duration of the Festival.

The photos here are a preview of the building; click any of them to see the gallery. To learn more about Ruth Scott Blackson’s Through the Pale Door, see HERE, and then stop by the Athenaeum any Thursday through Sunday, beginning today and running through the end of June.

Special thanks to Bruce Laverty at the Athenaeum for his assistance and inspiration.