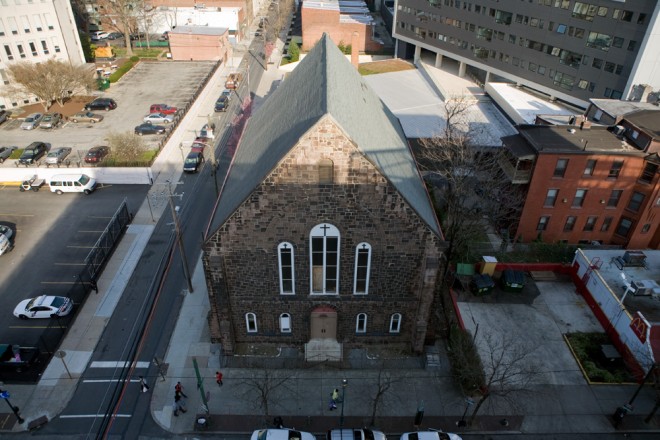 Could an underappreciated West Philly church get a new life as a temple of retail?

The West Philadelphia intersection of 40th and Walnut Streets is a heavily trafficked retail hub. As the northwest corner of the University of Pennsylvania’s campus, and a bridge to the neighborhoods beyond, it caters to a large student population and to local residents alike.

Much of the retail activity here occurs below Walnut, and east of 40th; above Walnut is still a work in progress, with The Hub on Chestnut anchoring the next major block north. From a development perspective, that work in progress marks the former 40th Street Methodist Episcopal Church as a building on life support, right smack in the middle.

While the church was slated for demolition in 2011 to make way for a new retail space, two years later the building still stands. In the interim, a team of students from Penn’s School of Design–Lindsay Bates, Ruthie Embry, Erika Hasenfus, Nityaa Iyer, Matt Morgan, and Shuyi Yin–is hoping that an exercise in adaptive reuse can spare the church, erected in 1866, and inspire more creative thinking on how to keep Philadelphia’s aging homes of worship occupied.

The church, designed by the firm of Samuel Sloan and Addison Hutton, was last in use as St. Joseph’s Baptist Church. Prior to that, it served as the First Church of the Covenanters from 1908 to 1954. Developers P&A Associates purchased the church for $2 million in 2007.

In April, the team of six students presented their vision for an adaptive reuse. The class on Preservation and Reuse of Traditional Architecture was taught by Fernando Vegas and Camilla Mileto, visiting professors from the Polytechnic University of Valencia in Spain.

“The work developed by the students shows clearly that a reuse of the church is feasible,” Vegas said, “not only from an architectural point of view, but also from an economical point of view.”

P&A founder Alan Casnoff, who was unable to attend the presentation, told Hidden City afterward that he welcomed the students’ collaboration, but lamented that the economics were too unfavorable for reuse to work. “We talked with every retailer that we could find. There was no interest in the space.” The location was also a turnoff because retailers were only looking at what’s already hot. “They all want Walnut Street,” Casnoff said. Furthermore, the costs of refitting the church were too high to make an adaptation profitable.

P&A has constructed two residential high-rises in Center City—the Murano at 21st & Market and the St. James on Washington Square—and has restored historic buildings in Center City and the Navy Yard, chiefly as office conversions. There are no church restorations in P&A’s portfolio yet, although Casnoff said he would like to take one on: “The unfortunate thing with [40th Street ME] is that it’s too small for residential. If it was taller and you could get more units out of it, a residential conversion could work.” The smaller square footage, he concluded, meant that retail adaptation was the most feasible option financially.

In reality, Philadelphia, while seemingly well represented in examples of reusing religious buildings for housing, offices, and performance spaces, has little to show for restaurants and retail. Antiquarian’s Delight, now closed, an independent business with a classic South Street vibe, is one example, housed in the former B’nai Reuben Synagogue in Queen Village (that building seems likely to be adapted for residential use). On the other hand, few interior religious elements define one’s experience there as the shop is set on the synagogue’s lower floor and basement. What of the 13th-century Dominican church in the Netherlands whose flying buttresses now oversee shelves of books? Or how about the former St. John the Baptist in Pittsburgh, a 1902 building that’s been the famous Church Brew Works since the mid-90s, or the wonderfully intimate gastropub, Holy Grale, in a Louisville church about the same size as 40th Street ME? What sort of big thinking—thinking inside the church—is Philadelphia missing out on? 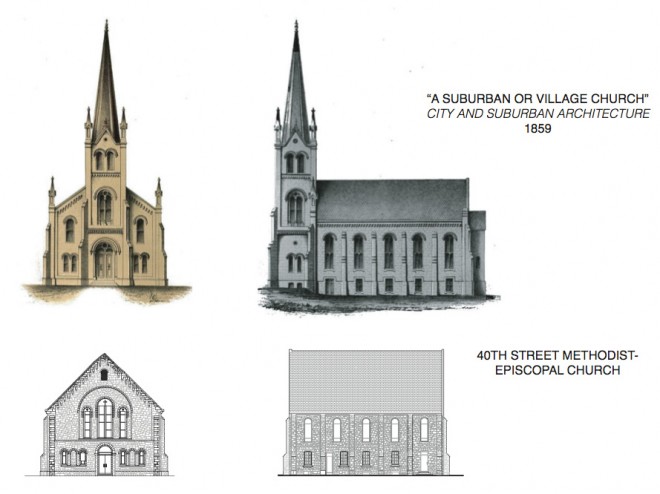 A Village Church With a City Presence

40th Street Methodist Episcopal—a simplified Romanesque-style, two-story building with a gabled façade, rounded-arch windows and brownstone masonry—seems to be more out of place with each new project that’s been built nearby. Along 40th, it sits next to a one-story McDonald’s and across from a surface parking lot owned by Penn. Across 40th is a supermarket, The Fresh Grocer, with a 10-story parking garage overhead. Casting its shadow behind it, along Walnut, is The Radian, a 14-story student apartment building opened in 2008 with first-floor retail spaces filled by Capogiro, Jimmy John’s, Chipotle, and others. The remaining three-story rowhomes on Sansom, mostly off-campus student housing, are like the church, increasingly dwarfed by their surroundings.

In 1860, when Centennial Methodist Episcopal congregation purchased the lot, the surrounding landscape was mostly undeveloped. The church that arose at the southeast corner of 40th & Sansom, completed in 1871, was derived from a design that appeared in Samuel Sloan’s 1859 book, City and Suburban Architecture. In Sloan’s prose, the design for the “suburban or village church” called for a central tower and spire to make it stand out “[a]mong the clusters of happy homes that skirt the borders of a great city, remote from the clangor of business,” so that it wouldn’t be “hemmed in and crowded by contiguous masses of bare brick walls, nor perched on a naked mound, but planted, as it were, among the trees, on the choicest spot the village can afford.”

The church that materialized here, however, came without the tower in order to make the fullest use of the space within the lot. It also reflected a canny anticipation of West Philadelphia’s urbanization.

“One of the many things that makes this building significant is that it shows how far a Sloan-designed building might depart from the published model on which it appears to have been based,” said Penn professor Aaron Wunsch, whose team-taught class, Recording and Site Analysis, also looked at 40th Street ME. In particular, the choice of smooth ashlar brownstone for the north and west street sides, versus the rougher rubble brownstone on the east and south sides, represented a nod toward future development and away from Sloan’s rhapsodically detailed suburban landscape: “Site and location mattered,” said Wunsch.

The St. Joseph’s Baptist congregation actually thrived during its 50 years there, leaving, in 2007, for a larger worship space, right in the middle of the neighborhood’s largely Penn-driven retail boom—and setting the stage for the present day.

Vegas’ and Mileto’s students set themselves a goal for reuse that could preserve the significant features of the building—including the entire 40th Street façade, the exterior buttresses, the staircases and wooden trusses—while allowing for an adaptation that would still give P&A a 10-20% profit on their purchase and renovation costs.

Two major challenges in adapting the building are the floor plan (the main space is on the second floor) and the lack of window frontage at street level, both significant hurdles to attracting shoppers. The students’ solution to these problems was to think big—and visualize a very, very big retailer. 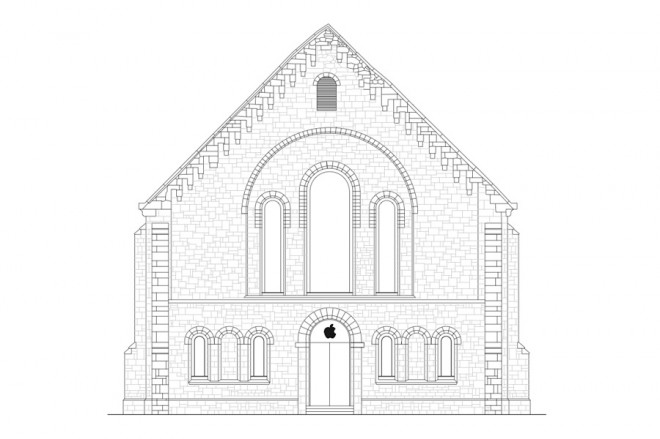 Apple Stores, they contended, are sought out as destinations in themselves, not stumbled upon through window shopping. While Apple’s “glass box” store on Fifth Avenue in Manhattan suggests that transparency is key, the team pointed out that Apple had successfully applied its glass-and-steel interior within historic buildings—such as the store on Buchanan Street in Glasgow, inside an Italianate building—without compromising their facades. 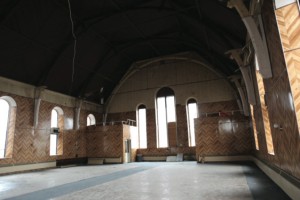 The so-called iChurch would come into being by removing the central section of the second floor, turning it into a mezzanine, and adding a central staircase in the Apple style with tempered glass panels—not unlike the layout of Apple’s original store in SoHo. To provide some visibility and utilize natural light, sections of the north wall between the buttresses would be replaced with glazing.

The students acknowledged the exclusiveness of their ideal tenant, but suggested that any A-list retailer with a sought-after reputation could inhabit the space.

When given details of the Apple Store proposal, Casnoff replied that they still had to take disability access and emergency exits into account; expenses as simple as an elevator would add significantly to overhead. He also thought that removing stone would be very costly and unsafe to the foundations. 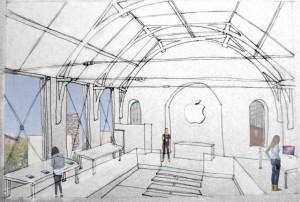 Casnoff pointed to Ralph Lauren’s Rugby line, which was recently discontinued, as his ideal tenant for the space. He concluded that some buildings simply can’t be saved. Demolition was not a willful option, he said. When restaurants and retailers kept saying no to the church, P&A tried to sell it to two local congregations at the same price they had purchased it, to no avail.

“We wracked our brain for five years over this,” he said.

In its place, he promised a building with a state-of-the-art design and four tenants who would give new vibrancy to 40th Street above Walnut. The envisioned replacement, in contrast with the church, will be a 20-foot-tall and fully transparent glass building. Casnoff declined to reveal the tenants they had lined up. An earlier report in the student paper the Daily Pennsylvanian, however, included a rendering and named Dunkin’ Donuts, Whirled Peace Frozen Yogurt, and the Philadelphia Chutney Company as potential tenants.

For Vegas, the aesthetics of any new construction “cannot reach the grandeur, constructive detailing, history and patina of the existing building.” From an economic standpoint, he added, “it is cheaper to reuse a building than to make a new one, not only for the owner, but also for the environment and the carbon trace.”

The timeline for demolition is dependent on several factors including the removal of asbestos fibers. L&I recently imposed a stop work order at the site because of asbestos, and subsequently revoked P&A’s application to renew its demolition permit. Asked via email, Casnoff replied that the situation was under control. As of this writing, the stop work order was still in effect.

Wunsch had his own reservations about some of the students’ proposals, including the removal of the northern wall, but added, “I think their impulse to think boldly is correct.” The problem with reuse, he stressed, was just as much a product of the business and tax climate, not to mention the lack of local historic protection. “What if the city tax code encouraged adaptive reuse instead of subsidizing new construction?” he speculated. “What if developers like P&A could obtain a portfolio showcasing good examples of such work and outlining business models that had made it possible?

“People sometimes say: sure, these demolitions are sad, but what else could one do? The answer is: a lot more.”