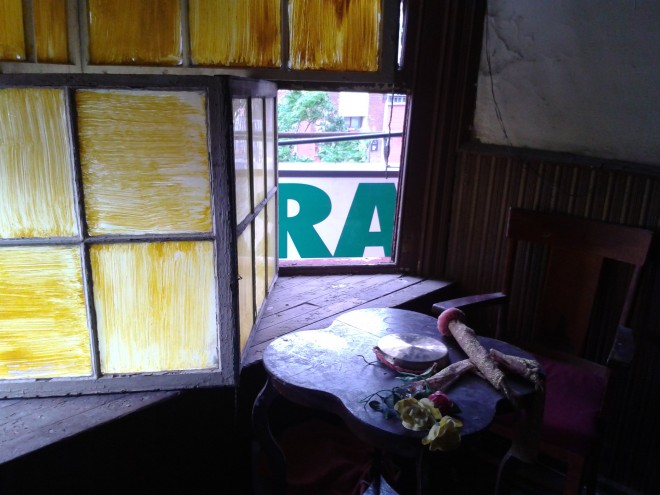 The body of the city is a vast and complex, harsh and beautiful thing; one of the great joys of living in it for so long is observing my own shifting relationship to the streets and sidewalks, storefronts and office buildings, rooftops, yards, parks, tables, benches, houses, churches, trees, paths, stoops, staircases, bus stops, El stations, train trestles, stone walls, hidden gardens, riverbanks, and factory courtyards.

Just the same, as Hidden City’s editorial director, I spend far too much time in the glow of my laptop screen and precious little out and about. But last week, the first of six weeks of the Hidden City Festival, I got to five of our nine sites, spaces transformed by the artist’s magic hand into places of delight, curiosity, and wonder. After having been part of planning the Festival for the past two years, I must admit that I am surprised by the power of the Festival experience to expand my own personal relationship to the body of city–and quite frankly, my notion of what is possible.

The Festival’s value, it seems to me, is to draw us into these new relationships: at the balustrade along the fisherman’s terrace to the north of the Water Works Interpretive Center, where a family of turtles has been floating around, here you enter what was once the city’s aquarium and later the Olympic lap pool of the Kelly Natatorium for tea and conversation at our Bibotorium. The magic here is in the play of light, in the suggestive sea wall, in the sweet tea and compelling story of the artists from the collective Camp Little Hope.

It’s only a 15 minute walk from the Bibotorium to the Society of Pythagoras at Hawthorne Hall, a dazzling breakthrough in the adaptation of a vacant space into a Funland. If you find yourself groaning about the state of conceptual contemporary art, here’s the antidote: a bright, fun, funny, engaging, and intellectually challenging–and eminently photographable–installation by the collective Rabid Hands to tell your friends about. But more so, in our ongoing confrontation with the ruins of the city, the project at Hawthorne Hall speaks to imperative of imagination: simple real estate and economic development interventions won’t solve this puzzle alone. Can artists lead the way?

An El ride on is the John Grass Woodturning Company, opened up for the first time since it was closed and left in place a decade ago. If you visit on the weekend, you should get to see a Philadelphia wood turner demonstrating the craft that made the company go for a century and a half. It’s a peek meant to pique our understanding of the complex industrial fabric of the city, what’s been lost, what still remains.

Mr. E.A. Poe seems to endure, anyway, at the Athenaeum. Artist Ruth Scott Blackson’s project Through the Pale Door is meant to draw us into a color world; what it does ultimately is give us an entirely new way to read and hear the words and work of Poe. The space isn’t transformed so much as the language. And there’s the oddly compelling signature in the Athenaeum guest book. 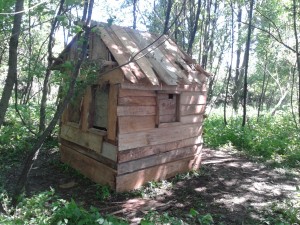 Finally, last Sunday I found myself in the car hurtling down Interstate 95 past the stadiums past Tinicum to Fort Mifflin (total time in car: 10 minutes). The ancient fort with its Old World patina, the purple sky, the airplanes close enough to spitshine…and into the Ruins at High Battery, where artists Ben Neiditz and Zach Webber have had, perhaps, the most fun of all, creating new ruins out of old, new vistas, playhouses, sacrarium, trails, places to lie down next to the river as the nature of the city enfolds us all around.

The best way to experience this–and the four other sites of inquiry and imagination–is to purchase an All Festival Pass. There are five weeks left to put it to good use; I promise you will be inspired.