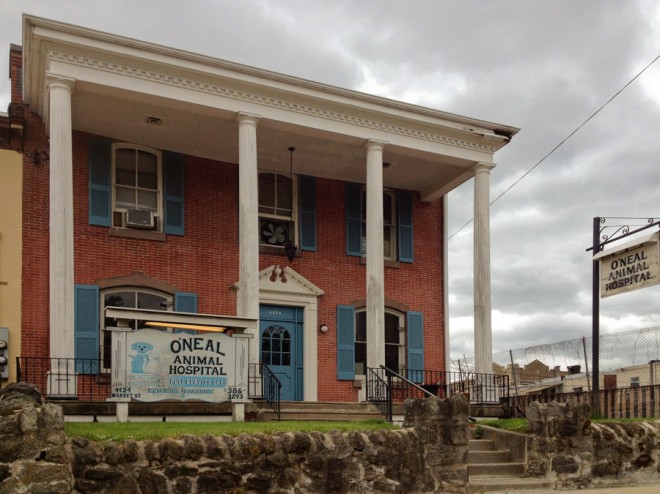 Preserved mostly by accident, this 129-year-old house-turned-animal hospital remains a vestige of architectural beauty in the otherwise ugly 4400 block of Market Street that shares a BP gas station, a surface parking lot, and a tire store.

Anyone who takes the eastbound El through West Philadelphia gets to enjoy an interesting southern view. It starts with a sea of D.F. McConnell porch houses interspersed with much larger institutional buildings. Then, after passing the always-bustling 52nd Street, the view becomes a mishmash of construction from different time periods mixed with empty lots and former industrial buildings serving all kinds of new uses. Among the last buildings visible before the train goes subterranean is this one, whose design and age seem out of place for its location. I always make sure to look out the window to get a short glimpse of it right before going under.

The O’Neal Animal Hospital looks like a row house that has been stretched horizontally into a square. It is set back far from the street, boasting a small lawn elevated by a wall of Wissahickon schist. Its façade sports a portico with some oddly proportioned columns. The windows facing Market Street are arched at the top, giving the building a unique presence. The odd placement of the windows on the western wall of the structure just adds to its mystery.

The building’s origins lie with a local businessman named Henry Clay Lowden. The H.C. Lowden Company started in the 1870s, producing and distributing stoves and heaters from their small operation at 9 South 40th Street. Lowden’s company successfully procured contracts installing stoves and heating systems in the new row houses being built on the far western reaches of the developed city, when 46th Street below Market could have been considered wild. It was here that Lowden wanted to build his new house. In 1884, Lowden acquired a 42′ x 215′ piece of land between Market, Ludlow, 45th, and 46th Streets, across from the massive complex of the Pennsylvania Hospital for the Insane. The only other building on the entire block was a singular row house built in the mid 1870s, set way back from the street. This house still stands next door, disturbingly altered as part of the entrance ramp of a Hertz Local Edition location. 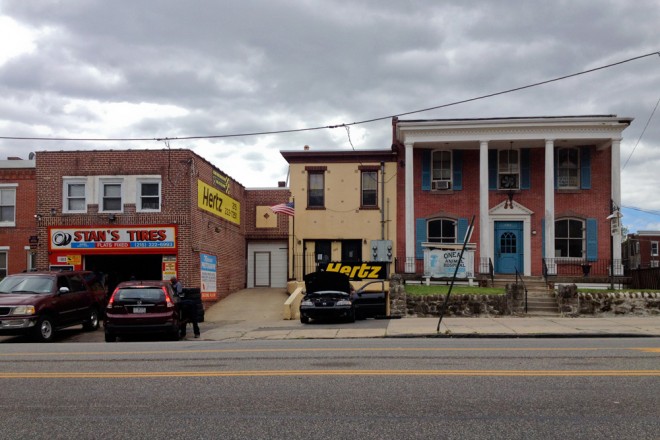 What they’ve done with the house next door Hertz | Photo: Bradley Maule

Lowden, seemingly using this single row house as a guide, set his new 32′ x 38′ house back the same distance and constructed it right along the other house’s party wall. Once built, the stately home (without the disproportional columns) stood with its companion, the surrounding blocks undeveloped. This might be why Lowden didn’t move into his new house right away–he stayed at his crib at 4221 Powelton Avenue until well after its construction.

Over the next ten years, the neighborhood started to fill in, spurred by talk about an elevated train that would straddle Market Street. Block after block got jammed with as many row houses as possible by a myriad of real estate speculators, especially on the western edge of the proposed train line. In 1896, Lowden decided to get in on the action. He announced plans to build 14 two-story row houses along the 4500 block of Ludlow Street, behind his own house. But he only built three of them–still standing–all on the southern portion of his new house’s property.

In 1901, Lowden finally moved into his new mansion. His company, now called H.C. Lowden & Son, was making a pretty penny providing plumbing and roofing for all the new West Philadelphia houses that were hastily being built in anticipation of the El, which was completed in this area in 1907. Henry Clay Lowden prospered until his death on October 23rd, 1916. His funeral was held in the house he built, no doubt interrupted at times by the rumble of the El above.

Right about the time Lowden kicked, industrial development was well underway, spreading westward along Market Street. Any area not already filled with houses got fitted with industrial buildings. The owner of the original single row on the block, next door to Lowden’s house, sold the bulk of the property to industrial concerns. That new industrial property took on the address of the old row house (4420 Market), changing the address numbers of the rest of the block. Lowden’s old house, now being used as the W.L. Banes Sign Company, became 4424 Market.

W.L. Banes eventually became the Banes Lithographing Company, then Banes, Mayer, and Breuker by 1919. The company expanded its location, leasing the industrial building at 4430 Market, just west of the old Lowden House, built a decade earlier. Banes shared the space with the owners of that building, the McConnell School Supply Company, through the 1920s. Though they stayed separate addresses, 4424 and 4430 Market would continue to be linked for the next four decades. The Atlantic Paper Company was next to use the two spaces, utilizing both as warehouses.

In 1934, Harold F. and Erling H. Haabestad moved their Hydrol Chemical Company into the two addresses, keeping their offices in the old Lowden House. The Haabestads held patents on all kinds of chemicals, from concoctions used for the maintenance of artificial grass to chemicals that helped make other chemicals. However, it was their patented embalming fluids that led to their success. Hydrol Chemical Company grew to produce and distribute pretty much everything related to burials and funerals. They stayed at 4424 and 4430 Market until 1950. They still exist today as a major source of funeral supplies.

While Hydrol was using the old Lowden residence, the Joseph Romulus Farrell Company was using the block’s original row house next door, which at this point had been connected to the massive industrial space to its east. Once Hydrol moved out, Farrell moved in. The Farrell Company were building contractors that specialized in structural concrete. In the precast concrete construction boom of the 1950s and 1960s, this company put up buildings all around the region. Most notable among these was Louis Kahn’s Richards Medical Research Laboratories. Before they moved to West Conshohocken in the early 1960s, the company sold off the old industrial building next door, leaving the old Lowden House a single property again. By this point, the El no longer screamed above, having been diverted and buried a few years earlier.

In the mid-1960s, the building became medical offices. Samuel Carey Bullock, a psychoanalyst who was the only black graduate of his classes in undergrad (Dartmouth College, 1943) and medical school (New York University College of Medicine, 1946), briefly held his private practice here. He would go on to become Hahnemann University’s deputy chairman and professor in the department of mental health services. Highly successful, Dr. Bullock was a prominent figure on Martha’s Vineyard, one of the first African-Americans to own a home there.

The building continued as medicine-related offices through the next decades, the mismatched portico in front added around 1970. The old industrial space next door was gone by the mid-1980s, replaced by a surface parking lot. Veterinarians started using the space in the late 1980s and the building as has been known as the O’Neal Animal Hospital since 1998.