All Aboard For GPTMC’s New Neighborhoods Campaign 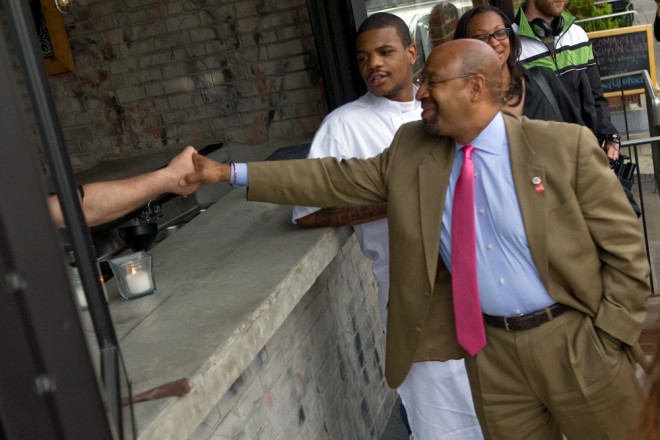 “This is the city of neighborhoods in the United States of America,” Mayor Michael Nutter said emphatically during his trolley tour of three of them this week. Joining Meryl Levitz and a number of representatives from the respective neighborhoods—West Philly’s Cedar Park, South Philly’s East Passyunk, and South Street in Bella Vista—the mayor came along to help the Greater Philadelphia Tourism Marketing Corporation kick off their Neighborhoods Campaign. The tour also commemorated National Travel and Tourism Week, which runs all this week through Sunday.

The Neighborhoods Campaign is a concerted effort to bring visitors off the proverbial beaten path and into the sections of town which provide its lifeblood. But it’s equally aimed at Philadelphia residents with the idea of cross cultural exploration.

With fourteen “visitor ready” neighborhoods—corridors with established vitality in the form of restaurants, shops, galleries, and most importantly, people—the campaign is only at its beginning. The initial 14, each with a fancy graphic by GPTMC graphic designer Nathanael Saldaña, were chosen primarily for their proximity and accessibility to Center City. GPTMC indicates that these 14, from G-Ho to Fishtown, West Philly to South Philly, only make up the first phase of the campaign. Mount Airy, Point Breeze, Mayfair: please be patient.

With the mayor and tourism entourage in tow, the trolley made three stops to visit local establishments and mingle with locals. At the first, Seeds Gallery on Baltimore Avenue in Cedar Park, Mayor Nutter commended owner Saba Tedla on her investment in her neighborhood and reminisced about his formative days around the corner at 55th & Larchwood. 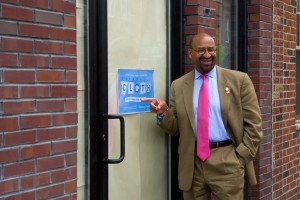 The second stop, centered at the Singing Fountain on East Passyunk Avenue in South Philly, welcomed a contingency of media and district Councilman Mark Squilla. This stop in particular also highlighted the mayor’s Three R’s of neighborhood revitalization: restaurant, retail, and residential. Between conversations with locals on the fountain and along Passyunk Avenue, the mayor gave props to acclaimed restaurant and bar Stateside, where manager Kema Fortunato and chef Elijah Milligan greeted passersby, and to Noord, the Dutch restaurant which opens this week. After some bruschetta and a shot of cream cello at longtime Passyunk stalwart Mamma Maria’s, Mayor Nutter stopped outside of Cloth, a natural parenting store with a focus on cloth diapering and responsibly made toys and gifts, to extol small business growth and opportunity. Cloth opens in early June.

The trolley concluded its tour at Brauhaus Schmitz, the South Street beer hall whose recent expansion into a back room waited with schinkenplatte (cured meats and cheeses), Kartoffelpuffer (potato pancakes with apple sauce and sour cream), and plenty of pilsner.

“We want to promote to ourselves too,” Mayor Nutter said, “not just to tourists. Our goal is to encourage visitors and residents alike to look at what all of Philadelphia has to offer, beginning with these fourteen vibrant neighborhoods surrounding Center City.”