A Study In Modern Stewardship—Louis Kahn’s Esherick House, For Sale 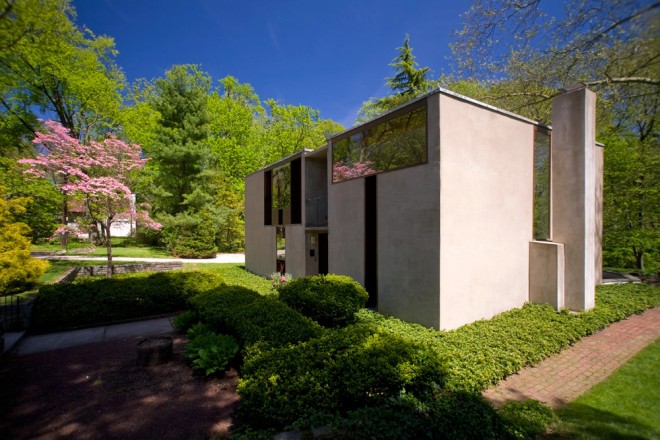 Beginning this Friday, May 17th, the Chestnut Hill Historical Society will host a series of events titled “20th Century Chestnut Hill: a celebration of mid-century architecture.” An exhibit at the Historical Society will focus on drawings, photographs, and models by architects such as Louis Kahn, Romaldo Giurgola, Oskar Stonorov, and Robert Venturi. Kahn’s son Nathaniel will host a screening of his documentary My Architect (about his father) on May 30th at the Woodmere Museum. The 20th Century series will also include a house tour on June 1st featuring two of the most influential houses in American modernism, and amazingly, they’re a block apart: Louis Kahn’s Margaret Esherick House and Robert Venturi’s Vanna Venturi House (Mother’s House).

The tour is an opportune time to visit these famous residences, particularly because the fate of each house has yet to be decided; the Esherick House has been on the market since 2008, and the Venturi House is about to be put up for sale. Though both buildings have been of great influence to the architecture community, they have obviously been of greater importance to the select few who have called them home. Lynn Gallagher, who bought the Esherick House with her husband Robert in 1981, was kind enough to share her experience there with Hidden City. 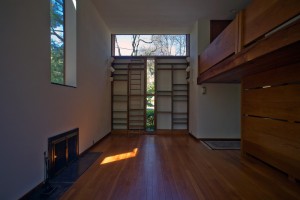 Louis Kahn designed the house at 204 Sunrise Lane between 1959 and 1961. The client, Margaret Esherick, was a bookshop owner, the niece of famed sculptor and furniture maker Wharton Esherick, for whom Kahn had designed a studio/workshop in 1956. Though Kahn is known worldwide for great public works such as the Salk Institute in La Jolla, California and the National Assembly Building in Dhaka, Bangladesh, Kahn’s residences have been the cornerstone of many architectural educations. Although only nine were built in his lifetime, each residence is a unique work of art; Kahn tests out various themes which then become implemented into his bigger work. As former chief curator of the Chicago Art Institute Joseph Rosa notes, “the Esherick House is Kahn’s most important realized residential commission and one of only a few that were actually built during the course of his career.” It’s important not only for Kahn’s design, but for elements incorporated from other designers with Philadelphia ties: Wharton Esherick designed the wood and copper kitchen, Frederick Peck the outdoor terrace and landscaping.

Born in Estonia in 1901 as Leiser-Itze Schmuilowsky—his father changed the family name to Kahn in 1915—Kahn moved in 1906 to Philadelphia, where he would spend the majority of his life and employ his practice until his death in 1974. He first studied architecture at Central High School, and went on to pursue a Bachelor of Architecture from the University of Pennsylvania, where he graduated in 1924. During school he worked in local offices including Hoffman-Henon Co. and Hewitt & Ash. After graduation, he worked at various other firms until he left Philadelphia to travel abroad for a year between 1928 and 1929. Upon his return, Kahn joined the office of the renowned Paul Cret, who had been Kahn’s professor at Penn. Beginning in 1933, Kahn formed various architectural partnerships until 1945, when he famously partnered both professionally and privately with architect Anne Tyng. Kahn also began teaching at Yale in 1947. In 1955, Kahn returned to the Penn to teach, and to design the Alfred Newton Richards Medical Laboratories. This project proved to be a turning point in Louis Kahn’s career. It was recognized as a landmark modern statement that broke from the International Style. This led to the coining of the term “Philadelphia School” with Kahn at the head of the movement. 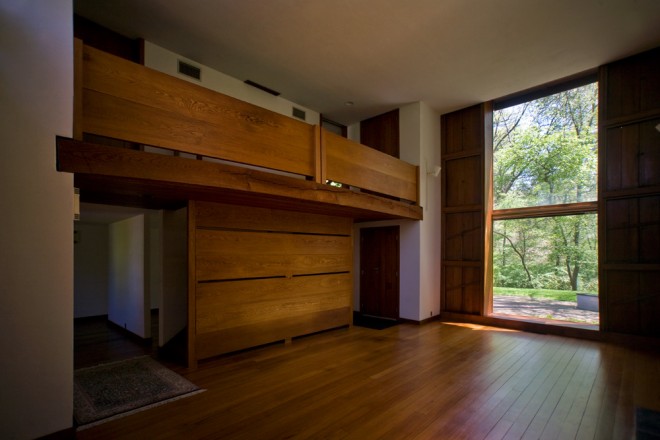 The T form is evident in the Esherick House from small joints to large windows, and this bannister supporting the stairway | Photo: Bradley Maule

In 1959, while the Richards Laboratory was under construction, Kahn was commissioned to design the Esherick House. Simultaneously he was hired to design the Tribune Review Printing Press Building in Greensburg, PA and the American Consulate in Luanda, Angola (unbuilt.) Although all three projects vary greatly in typology and scale, Kahn used the Esherick House as a testing ground for some of his most iconic ideas about architecture and design, concepts he would later employ in both projects, but especially in the Tribune Review Building, finished in 1962. The T-shaped windows, the separation of the service and served spaces, and the juxtaposition of thickened walls with deep recesses are evident themes throughout the home. The ‘T’ form in particular is prevalent, not just in the window articulation but also in the joint between materials. 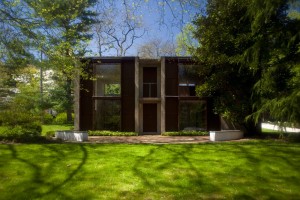 The 2,500 square foot, one bedroom residence is divided into these “served” and “service” spaces by the entrance, balconies, and linear stair. One wing of the rectangular volume contains a double height living room, while the other has a stacked dining room/bedroom and the service zone, including the kitchen. The exterior envelope is made of stucco faced concrete block, and contrasts heavily with the warmth of the wood interiors. Each façade responds to its orientation and has a direct relationship to elements in the interior. The carved out windows and wood shutters are specifically placed to bring light and air into the spaces at different times of the day and year. The deep sills that these create provide perfect places for a book lover such as Margaret Esherick to sit down and read. The more solid street façade with its ‘T’ windows reveals floor to ceiling bookshelves on the interior and serves as a contrast to the mostly glass rear façade, which opens up to adjacent Pastorius Park. Kahn designed the house in such a way that even without any furniture, the house does not feel empty.

Current owner Lynn Gallagher describes the house as an “almost spiritual” place. The spaces are always filled with light even when the sun isn’t out; at night, the house glows outwardly to the landscape. Margaret Esherick lived in the house for only a few months before her death from pneumonia at the age of 43. A prospective buyer, Freda Parker, hired Kahn to design an addition, but it remained unbuilt when Parker withdrew her bid. In her stead, Burnap and Janet Post purchased the home from the Esherick estate.

Dr. Robert and Lynn Gallagher bought the house from the Posts in 1981. Lynn, a graduate of the University of Pennsylvania, says her husband, who passed away in 2010, was a lover of antique and classic cars, and was drawn to the house in the way he was drawn to those hobbies, seeing a need in it to be restored and curated. In order to properly do so, the Gallaghers consulted the Kahn Archives at the University of Pennsylvania. They worked with people who had worked with Kahn and brought in woodworkers to refinish all the wood interiors, including the Wharton Esherick kitchen. Gallagher notes that the importance of the project was not lost on the workers. “Every person who worked on the restoration was proud and honored to be a part of it,” she says. 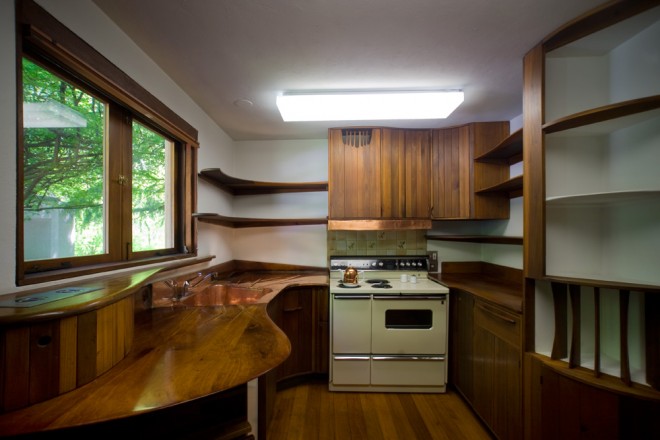 The Gallaghers saw themselves as the stewards of the house and intended to keep it as pure as possible. Since its construction in 1961 and a restoration in 1982, the house has seen very little change. In 1992, the house received the Landmark Building Award from the Philadelphia Chapter of the American Institute of Architects, and it was added to the Pennsylvania Register of Historic Places in 2009. Even the smallest of changes such as the living room light fixtures require a thoughtful curatorial process. Lynn says she asks herself, “what would Kahn think?” any time an update or upgrade comes about. As stewards aware of the importance their home has in architectural history, the Gallaghers have welcomed a number of people into their home in the last 32 years. Famous architects David Adjaye and Shigeru Ban are among those who have signed the guestbook.

For Lynn Gallagher, the time has come to move forward and initiate a new generation of stewardship at the Esherick House. But she’ll only do so knowing the next owners appreciate Kahn’s work as much as she does. Patrick Gallagher, Lynn’s stepson and the home’s listing agent, agrees that they are looking for the ideal owner and steward of the house. “It is a piece of art, but it is very much a livable home,” he says.

A private homeowner, however, is not the only option for the preservation of the Esherick House. In 2003 the Farnsworth House, designed by noted architect Ludwig Mies Van der Rohe, was sold at auction to the National Trust for Historic Preservation in collaboration with Landmarks Illinois and the Friends of the Farnsworth House group. Since then it has been restored and preserved, and is open to visitors on an appointment basis. Asked whether she would entertain the idea of a private entity buying the house, Gallagher indicated that it would be a great legacy to the work of Louis Kahn if the likes of the University of Pennsylvania or a Historic Trust could purchase it. Regardless who the next buyer is, she just wants someone who is as passionate as she is to enjoy—and protect—the spaces Kahn created.

The 20th Century Chestnut Hill series begins with the exhibit opening on Friday at the Chestnut Hill Historical Society, 8708 Germantown Avenue. For more on it and the other events planned, visit their web site HERE.