A Saga In Sculpture: The Barnes Brings Ellsworth Kelly Milestone Home To Philadelphia For The Summer

An art using pure colors expressed in simple monumental forms adapts itself easily to modern building. The glass and steel reinforced concrete structures have created a new form and a new space to work upon. The monochrome buildings demand color, and the spaces demand an image on a large scale—powerful statements which are very much alive.

A spoon full of sugar helps the medicine go down.
—Mary Poppins, 1964 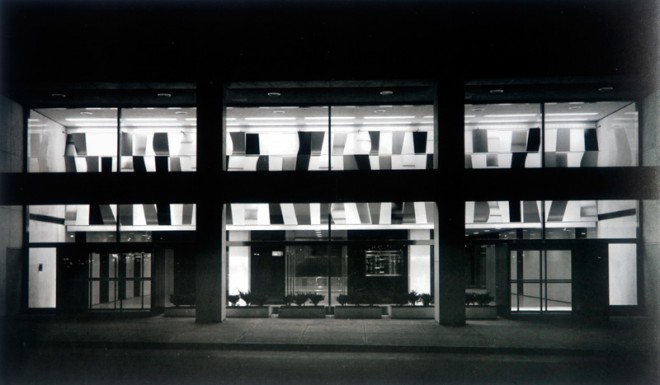 Ellsworth Kelly’s Sculpture for a Large Wall, in its original habitat as Transportation Building Lobby Sculpture | Image courtesy of the Barnes Foundation

Center City Philadelphia in the 1950s was a patient undergoing intensive medical treatment. City planner Edmund Bacon, architect Vincent Kling, and a bevy of powerful business interests were prescribing heavy doses of urban redevelopment for the blocks west of City Hall, where the Pennsylvania Railroad’s imposing Broad Street Station and Chinese Wall were demolished to make way for Penn Center, one of the most ambitious building campaigns in the city’s history. Modern glass, steel and concrete office cubes rose to form a new commercial center, also featuring a luxury hotel, new Greyhound bus terminal, outdoor ice rink, and a network of public plazas and subterranean concourses designed to heal the heart of a downtown diagnosed with near-terminal congestive failure.

Almost sixty years later, Penn Center is more bemoaned as scar tissue than celebrated as successful surgery. Understandably so; its architecture was always mediocre at best, and successive remodeling campaigns have stripped it of elements that might have accrued a certain period charm if they had been left to ripen. The mod hotel, the Greyhound station, and the ice rink are all gone and forgotten, and despite each being replaced by far superior structures, the absence of their aesthetic sweetener leaves the remaining center all the more bland.

But a curious historic artifact from Penn Center’s forgotten past has recently made a surprise reappearance that casts Philadelphia’s midcentury folly in a compelling new light. The artifact is a large Ellsworth Kelly wall sculpture originally installed in Penn Center’s Transportation Building, an office tower at 17th and Pennsylvania (now JFK) Boulevard adjacent to the new Greyhound station, designed by Vincent Kling and completed in 1957. It has reemerged as the centerpiece of a major new exhibition at the Barnes Foundation, “Ellsworth Kelly: Sculpture on the Wall,” which opens on May 4th as the Barnes’ first contemporary exhibition in its new Parkway incarnation.

Kelly was thirty-three and unknown when he designed the piece, having returned from six years abroad, steeped in the Modernist circles of Le Corbusier and others whose architecture invited ambitious collaboration with abstract art. A chance encounter with a lighting designer in a New York bar led to a small commission creating decorative brass screens for the Post House Restaurant, a cafe for Greyhound passengers on the ground floor of the Transportation Building. When Vincent Kling saw the designs, he commissioned Kelly for a large piece in the building’s main lobby. While modernist lobby art might seem rote today, the commission was Philadelphia’s first abstract work of public art, installed two years before the city’s groundbreaking Percent For Art program was established as the first of its kind in the nation.

Though Kling was no Corbu, the sculpture’s juxtaposition with Kling’s severe grid of simple punched windows must have been striking. The piece was well-received in architectural circles and made the cover of Architectural Record in May 1957, launching a career that now finds Kelly in the upper echelons of the modern art pantheon. But despite the significance of the work, its original Penn Center location is virtually forgotten today and almost impossible to envision. Originally constructed as headquarters for the post-Broad Street Station-era Pennsylvania Railroad, successor company Conrail left the building an abandoned shell in 1993. Five years earlier, the adjacent Greyhound station which funneled passengers past work was demolished and replaced by the Mellon Bank Center. In 1998, renovations for current tenant Morgan, Lewis & Bockius stripped Kling’s original facade and completely reconfigured the ground floor spaces. During the remodeling, the sculpture was quietly and unceremoniously sold to New York collectors, who later donated it to the Museum of Modern Art. 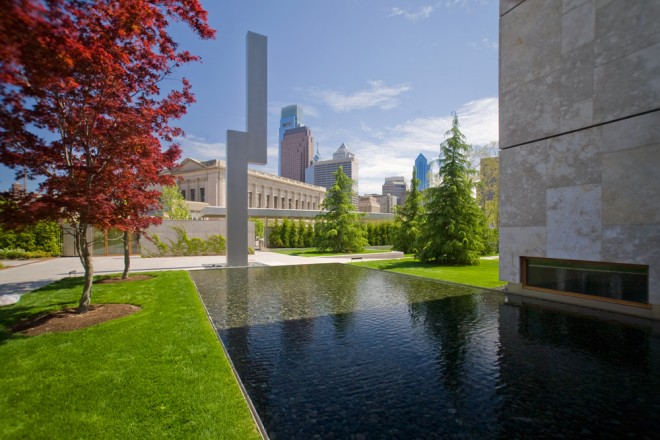 The piece’s temporary return to the city of its birth is a coup for the Barnes Foundation, whose first acquisition for the new museum, Kelly’s 2012 Barnes Totem, is installed in the exterior courtyard. The return of the work now rechristened Sculpture for a Large Wall should help rekindle interest in a largely forgotten chapter of Philadelphia’s art and architectural history. It might also underscore that chapter’s relevance in a historical continuum that reverberates in surprising directions.

If the plot line of Transportation Building Lobby Sculpture sounds vaguely familiar, it should. Consider this correspondence: in 1894, a relatively unknown young artist received the commission from a famous Philadelphia architect to design a sculpture for the wall of a busy Center City transportation hub. The architect was Frank Furness, the building was Broad Street Station, the artist was Karl Bitter, and the piece was titled The Spirit of Transportation. In 1933, after a four-decade tenure nearly identical to Kelly’s work, the sculpture was removed from its original location and reinstalled in 30th Street Station, where it survives today.

Though the pieces are of diametrically opposing styles, Bitter’s broad, sweeping procession of allegorical figures celebrating the march of progress and modernity resonates with the Kelly piece in surprising and amusing ways. For just as Bitter’s work is punctuated by the prophetic vision of a child holding the model of an air ship (in 1894, remember), so too are Kelly’s abstract architectural forms prophetic in their own way. In 1950, in a letter to John Cage, Kelly wrote, “I am not interested in painting as it has been accepted for so long—to hang on the walls of houses as pictures. To hell with pictures—they should be the wall—even better—on the outside wall—of large buildings.” Try reading this passage, looking at the faceted and angled shapes that compose Sculpture for a Large Wall, and not be reminded of the Comcast Center, Cira Centre, or even the folded ceiling of the new Barnes. 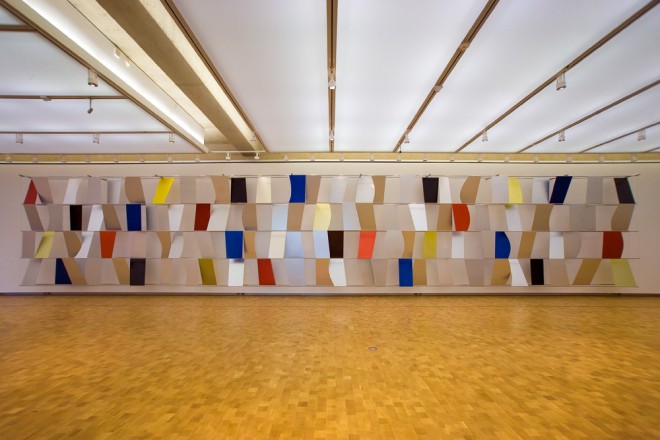 Sculpture for a Large Wall, 1957, on display at the Barnes Foundation | Photo: Bradley Maule

Now approaching 90, an impressively spry Ellsworth Kelly was in attendance at the press preview for the Barnes exhibit yesterday, where he spoke approvingly of the design by Tod Williams Billie Tsien Architects for the new museum. “I’m so happy to be in this building,” he said, gazing up towards the ceiling. “It’s an excellent place.” What was left unspoken was the irony that MoMA, which still owns Sculpture for a Large Wall, announced plans three weeks ago to demolish another Williams & Tsien museum with a distinctly Kelly-like façade, the twelve-year-old Folk Art Museum.

He later asked the assembled roomful of people if anyone had seen his sculpture in its original location; nobody raised their hands. “I like the idea that [the sculpture] has moved around a bit. I’m sorry that it got taken away from Philadelphia, but the building had changed,” he remarked, making particular note of the pigeons who had taken up residence in the abandoned lobby in the late 1990s. This may or may not have been a conscious elaboration on an earlier comment that “art continues, no matter what’s happening,” but the observation struck a chord in the story of not only his own experiments in architectural expression, but in experiments past and yet to come; a fittingly Barnsian confluence of arcs.

Representative of an era when modern architects used modern art to help humanize new formal ideas, Sculpture for a Large Wall helps remind us that we are still living in that era, and have always been.