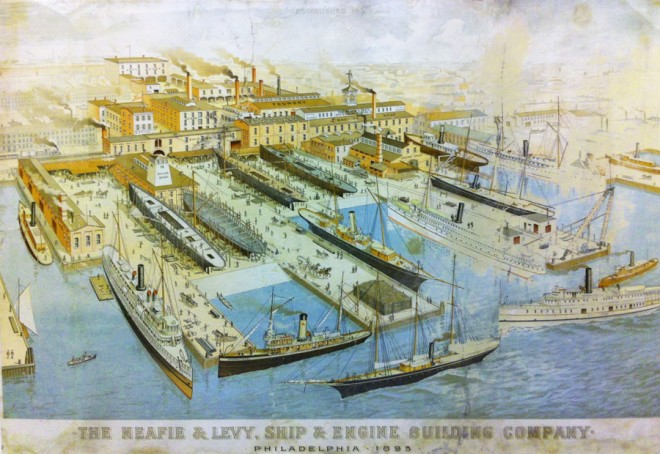 Aaron Wunsch’s recent article “Why 400 South 40th Street Matters,” with its introduction to John Patterson Levy and the firm he joined—Reaney, Neafie & Company; later Neafie & Levy Ship and Engine Building Company—brought to mind the great achievements of this obscure ship and engine-building outfit. The first fire engine in America, the first submarine of the US Navy, the first United States destroyer: all were made at this Kensington shipyard near Beach and Palmer Streets, the site that would become the iconic Delaware Power Station. 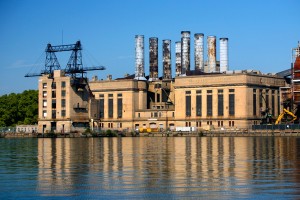 Philadelphians Thomas Reaney, Jacob G. Neafie and William Smith opened a plant in 1844 to manufacture steam engines and propellers for steamboats, and entire vessels made of iron. One year later, John P. Levy came into the company after Smith died. Reaney sold his interests after a decade and a half and the firm became the Neafie & Levy Ship and Engine Building Company. The firm soon rivaled the renowned and much larger William Cramp Shipbuilding Company, located only a half mile upriver, in late-19th century Philadelphia.

Neafie & Levy built over 300 iron and steel boats, including numerous ferry boats, ocean-going tug boats, and expensive yachts, such as J. P. Morgan’s Corsair. The company was also the largest supplier of screw propellers to other North American shipbuilding firms in its early years, and was Philadelphia’s busiest and most heavily capitalized shipbuilder in the early 1870s.

And more: from 1844 until 1896, the firm constructed over 1,300 steam engines, including thirty-four steam fire engines. Indeed, the company became widely known as the “Penn Works”—for “Penn Steam Engine and Boiler Works”—because it was located immediately north of the place where William Penn purportedly signed his famous treaty with the Lenape people (today, Penn Treaty Park). 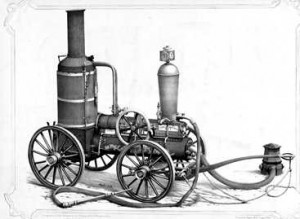 Operated by three firemen, the horse-drawn engine was able to produce a steady stream of water reaching 275 feet. Its performance was considered breakthrough technology for its time, and other fire companies across the city and nation were convinced to acquire steam-powered pumpers, thus helping usher in modern-day firefighting equipment. The engine was even sent to Boston and New York to participate in water-throwing contests.

The pioneering Philadelphia was sold to the Insurance Patrol in 1870, which used it for pumping out the basements of flooded buildings until 1926. It then became part of the historical firefighting artifact collection maintained by the Insurance Company of North America (later CIGNA Corporation). In 2004, it was donated to Philadelphia’s Fireman’s Hall National Firehouse and Museum in Old City. The steamer is on display there and is considered to be the first and oldest steam fire engine in America.

The Pioneer may seem like enough to secure the legacy of Neafie & Levy, but there’s more. During the Civil War, the company constructed the US Navy’s first submarine, the USS Alligator (or “Submarine Propeller”). Preceding the CSS Hunley by more than a year, the 47-foot long underwater craft had a diver lockout chamber and an air purification system–all revolutionary ideas at the time. She was propelled by two banks of oars that were hand-operated by the ship’s 20-man crew.

Workmen launched the Alligator into the Delaware River from Neafie & Levy’s shipyard on May 1, 1862 and sailors towed her to Hampton Roads, Virginia for war service, making her the first submarine ever sent into a war zone. In Washington, President Lincoln watched the vessel tested in the Potomac River near the Washington Navy Yard on March 18, 1863. Afterwards, a screw propeller was substituted for the unwieldy oars and a small conning tower with viewing ports was added.

The Alligator was subsequently towed south to participate in the attack on Charleston harbor, making her the first submarine to be part of a naval task force. On the way, she was tossed about by a heavy gale and one of two tow lines snapped. The other line was released so that the tow ship would not be dragged down. The adrift and crew-less Alligator sank on April 2, 1863, at Hatteras, North Carolina. The exact whereabouts of the remains are unknown.

To call the vessel the “USS” Alligator is not entirely correct, as she was not “in commission” by today’s standards. (There’s no record of the Alligator ever being formally commissioned in the US Navy.) But the “USS” designation is acceptable as it honors the ship’s duty “in service” to the Navy, as well as her unique status in naval submarine force history.

You would think that the story of the Alligator would be enough to guarantee the fame of Neafie & Levy, but yet another superlative ship came from the firm’s yard. The USS Bainbridge (DD-1) was the first naval destroyer in the United States Navy and the lead ship of her class. She was the second ship named after William Bainbridge (1774-1833), a Commodore in the United States Navy who served under six presidents and is notable for his many victories at sea. 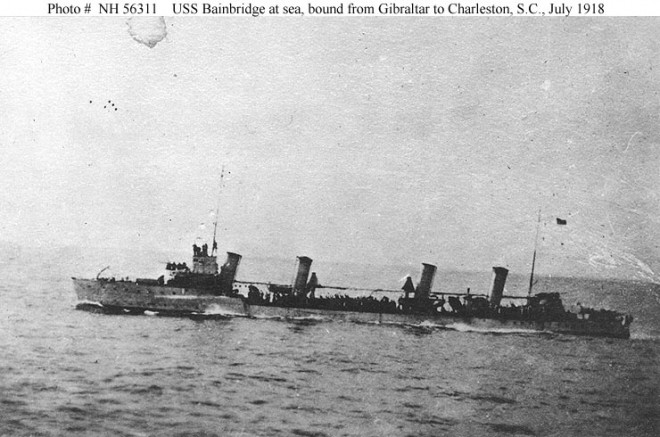 The Bainbridge was launched on August 27, 1901, by Neafie & Levy. After serving around the Philippine Islands as part of the 1st Torpedo Flotilla of the Asiatic Fleet, she took on patrol and convoy duty off the coast of Egypt during World War I. She was decommissioned at the Philadelphia Naval Yard and sold for scrap in 1920.

Meanwhile, the seven-acre Neafie & Levy shipyard remained along the Delaware until 1908, when wreckers dismantled the ship’s berths and tore down the facility’s buildings. (This followed the company’s slow descent into bankruptcy.) The property was sold to the Immigration Service, which erected a quarantine station in its place. Philadelphia Electric Company then bought the site and erected the Delaware Station. Built during World War I, the electric plant entered service on October 31, 1920. Philadelphia Electric, aware of Neafie & Levy’s achievements, placed a plaque about the company near Penn Treaty Park.

One tangible reminder of this great ship and engine manufacturer remains in Philadelphia and is still hard at work on the Delaware River. The tugboat Jupiter was built by Neafie & Levy in 1902. Berthed at Penn’s Landing, she is believed to be the oldest tug representing Neafie & Levy’s work, as well as the oldest continually operating harbor tug on the Delaware. 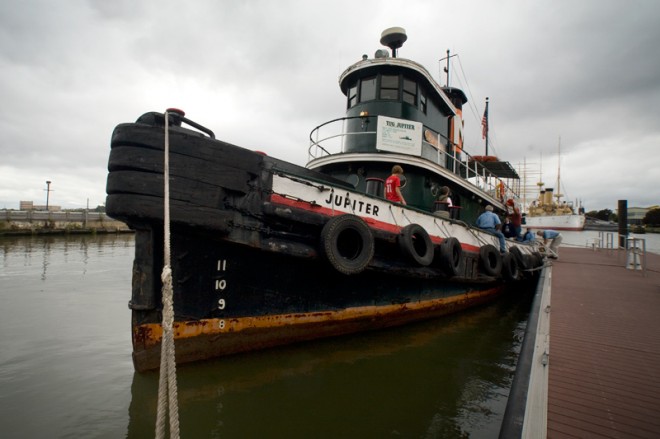 Owned by the Standard Oil Co. of New York, the tugboat towed Socony (“Standard Oil Co. of New York”) fuel ships and barges in New York Harbor from 1902 to 1939. Her name was first S.O. CO. No. 14, then became S.T. CO. No. 14, and then lastly Socony #14. Independent Pier Company of Philadelphia bought the ship in 1939 and renamed her Jupiter. During World War II, she was involved in the launching of the numerous naval vessels, including the battleship New Jersey (BB-62), from shipyards along the Delaware River.

The Philadelphia Ship Preservation Guild in 1989 bought the tug, which takes part in educational programs, festivals, and boat parades. Jupiter is also used as a functioning tug, moving the Ship Guild’s other vessels. Operation and maintenance is performed by a volunteer group of active and retired tugboat professionals and enthusiasts.