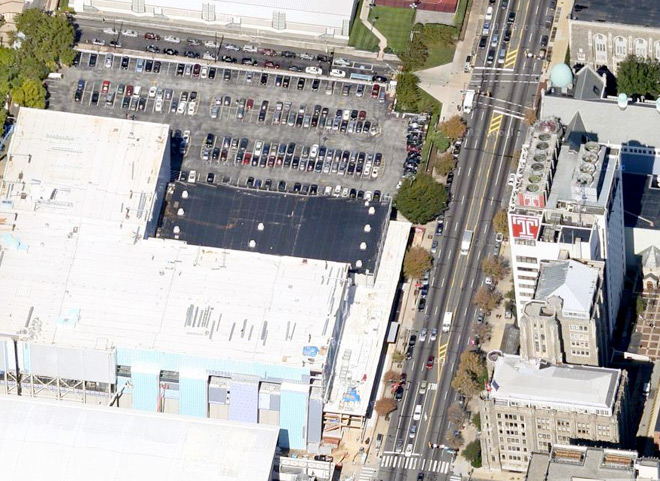 Another lot to be gone: site of forthcoming Snøhetta library at Temple University | Image: Google Maps

Temple University campus architect Margaret Carney said last week the university sought “the best talent in the world” in selecting the Norway-based firm Snøhetta for a new campus library to be built adjacent to the Liacouras Center and McGonigle Hall on North Broad Street.

Carney, speaking at a university lecture given by Snøhetta director Craig Dykers, said that the new library “will redefine [the term] ‘library.'” She continued, “it will be an invention; you can’t point to anything currently like it.” 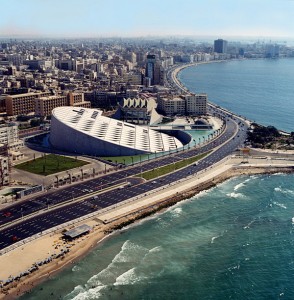 The firm earned an international reputation in 1989 with the competition-winning entry for the new library in Alexandria, Egypt. Since then, the firm has completed numerous award winning projects including the Norwegian National Opera in Oslo and the National September 11 Memorial Museum Pavilion at the World Trade Center in New York City. Snøhetta was recently commissioned for a redesign of Times Square.

At Temple, Snøhetta will partner with the local design firm Stantec.

Dykers’ lecture focused on the firm’s impressive work portfolio, which also includes a number of notable library projects (the firm has completed upwards of 20 such projects in its 24-year history). It’s this array of projects that Margaret Carney said was a main factor behind choosing Snøhetta’s proposal out of 39 submissions for the new Temple library.

The project is currently under contract negotiation between Snøhetta, Stantec, and Temple, so project details were left out of Dykers lecture. Instead, the packed room of students, professors, professionals, and citizens gained insight into the firm’s outlook on the demise of “dusty old” libraries and the rise of transformative, knowledge-intensive, community hubs.

The firm prides itself on its nontraditional approach—authorship is nowhere to be found in the firm’s name, Snøhetta (a Norwegian mountain)—rather than for a star or list of star partners. The firm name is just one of many collectivist-oriented approaches and the firm doesn’t shy away from designing for socially just causes where opportunity exists to bring people together for various reasons. Enter the 21st Century library, a place Dykers sees as a community center intrinsic in people’s daily life where diverse groups of people can share information and knowledge.

“Modern library design has to be about more than just adding computers,” Dykers told me in an interview yesterday. “You need to understand how people interact—from single individuals who are quiet up to 40 people who are loud and dramatic.”

“Because media and the Internet saturates our daily lives, there is so much access to information,” he said. “What we don’t have enough of are places to share that information.”

For decades now, libraries have both been viewed and designed as places exclusively for quiet and solitude, and for the archiving and storing of the written word. Dykers sees that outdated view as a “tremendously challenged,” short-sighted scope of what libraries can provide.

“Libraries have never been just about books or computers,” Dykers said in the lecture. “A library is a place for people to interact and allow for diversity in thinking. It’s about creating useful and viable spaces for people.”

This function, Dykers says, is a return to knowledge sharing centers as active places, based on the experience of Ancient Greece. The Greek stoa—covered walkways that would typically surround a town’s central market place (agora)—would draw intellectuals to discuss philosophy and politics. 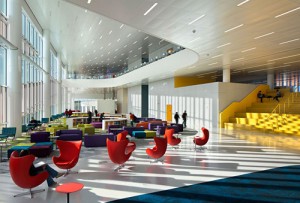 Snøhetta’s recent library projects build off the stoa example, aiming to create dynamic, active places where people feed off that energy in the sharing knowledge process. Hunt Library at North Carolina State, the firm’s most recent library project, celebrated its official dedication last week. The building is noted for its generous open spaces connecting all floors of the library as well as its emphasis on an interactive and social environment where “disruptive” learning spaces with colorful, dynamic furnishings exist alongside more focused study areas.

At Temple, Carney sees a chance for the library to “fully embrace Broad Street” and “become a stronger part of the urban context.”

The Ryerson University Student Learning Centre in Toronto, which broke ground in recent months, is another example. When complete, it too will offer a range of activities for users, both on an individual and collaborative basis. The library’s prominent Yonge Street frontage will even feature destination retail services.

Dykers said the firm is focused on the future and the ever-evolving needs of modern libraries. “By the time the library in Toronto opens, technology will have advanced even more,” he told me. “Access to building and making things is dramatically changing.” 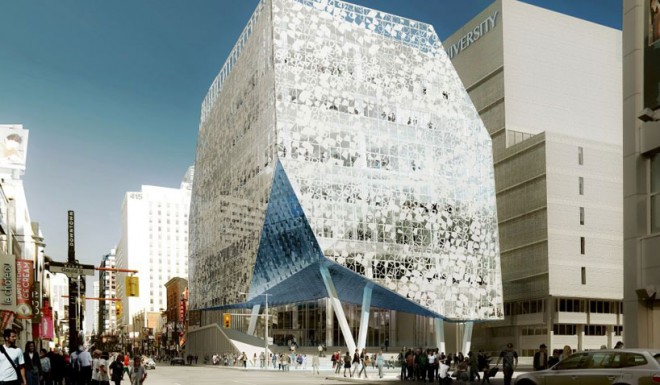 Sustainable and environmental design will continue to be a major component of projects the size and scope of Temple’s new library, an aspect Snøhetta will certainly address; 25% of the firm is comprised of landscape and interior architects.

Technology, Dykers asserts, not information, is now what libraries provide access to in the modern world, especially to those that can’t always afford modern conveniences.

With that in mind, Dykers believes that in addition to being places where reading and sharing is paramount, libraries are quickly becoming places for makers as well. “Libraries will be about making of things, not just reading things,” he said.

The Hunt Library features 3D printing in the “Makerspace” section of the library where students, faculty, and staff can learn about emerging technologies and how to bring their digital creations to life. With the Temple University library still under contract negotiations, Dykers can’t yet speak on project details. With the firm’s work as a precedent, and with Temple’s newfound commitment to rigorous architecture, what can assuredly be expected is the transformation of the term “library” in Philadelphia—and we imagine, the experience of North Broad Street.