Three Men And A Boat 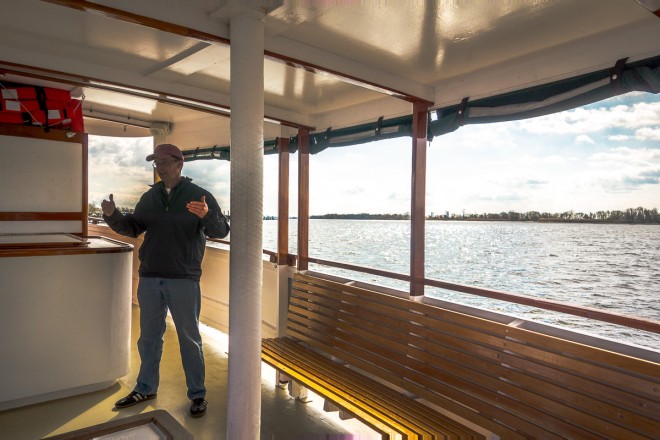 The conversation drifted upstream from the Delaware to the Schuylkill. There was a short lived riverboat cruise, they thought, but it stopped operating. “The Schuylkill could surely use one; why don’t we start one together?” The sort of conversation that never makes it off the dock. This time somehow, the idea set sail.

Fast forward to present day and the three men have formed a partnership called Patriot Harbor Lines. Its first boat? The Patriot. She’s—for lack of a better word—Fitzgeraldian. She looks like she sailed in from times past—and she’s supposed to. The Patriot is based on a commuter boat design from the Roaring Twenties, but beneath the flapper exterior lies modern wood and fiberglass construction, as well as a 21st Century engine. 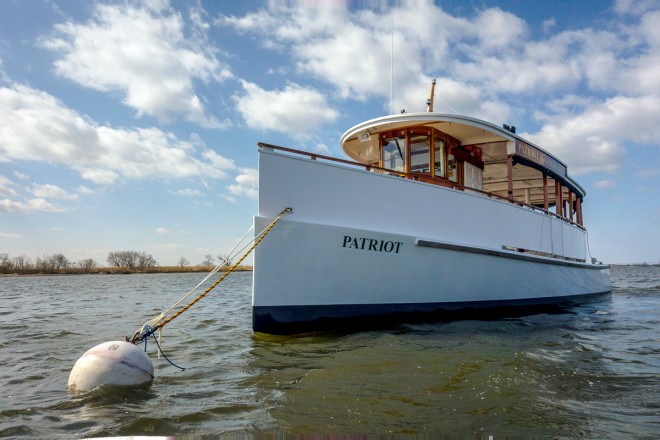 With room for just 35 people, Art Bell says The Patriot is meant to be “an intimate experience…for a more upscale crowd.” The first official ticketed outing will be on May 12th: Mother’s Day.

The $30 tour, between the Walnut Street Dock and Bartram’s Garden, lasts three hours and includes the entrance fee to the Garden. Initially, it’s scheduled to run every Saturday and Sunday. There are also plans for an evening cocktail cruise along the Schuylkill which would pick up and drop off at the Waterworks, at the foot of the Philadelphia Museum of Art.

“We want people to take a break from the hustle and bustle of Philadelphia while remaining in the middle of Philadelphia,” McCammon says of the intended cruise experience. That, plus a learning experience. The Schuylkill River Development Corporation has partnered with Patriot Harbor Lines to provide tour guides for the river cruise. 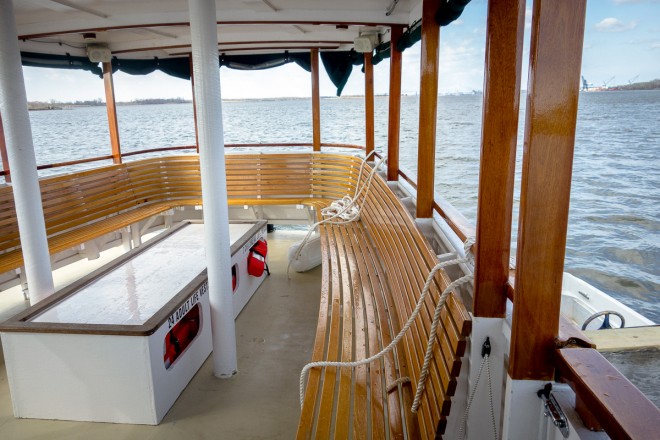 Feel the breeze on the starboard side | Photo: Theresa Stigale

Putting a riverboat back on the Schuylkill River could have a huge residual effect. SRDC founder John Randolph notes that the land portion of the river is already really well developed; the Locust to South boardwalk is under construction, the Grays Ferry Crescent is already online, and Bartram’s Mile is in planning. Randolph is pleased with the progress, but recognizes the work ahead. Twenty years ago, he spearheaded efforts to turn the then post-industrial riverfront into a greenway. Today, the Schuylkill Banks is used annually by over a million joggers, cyclists, walkers, and more. The river itself is another story altogether.

Randolph believes The Patriot could help activate the river itself. “The boat is the only way you can see the river,” he says. The return of a cruise adds another layer of vibrancy not just along the Schuylkill, but on the Schuylkill.

It’s another part of the grand vision to return the ancient industrial riverway back to its pulsing arterial roots—something Philadelphia can be proud of and use. “This river can grow up,” Randolph says.

The growth continues with The Patriot’s first official river outing on May 12th, Mother’s Day.