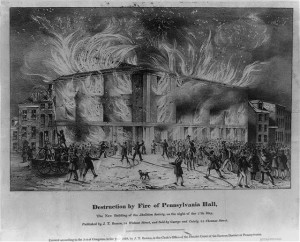 On May 14, 1838, civil rights pioneer Angelina Grimké was married to renowned abolitionist Theodore Weld in Germantown. That day, progressives of various sorts, including Weld and Grimké and Grimké’s older sister, the fierce and self-doubting Sarah Grimké, dedicated Pennsylvania Hall at Sixth and Arch Streets to be a “room wherein the principles of liberty: and equality of civil rights could be freely discussed, and the evils of slavery fearlessly portrayed.”

Daniel Neall, the president of the association of abolitionists of Philadelphia, went on in his dedication speech to point out, “a majority of the stockholders are mechanics or working-men, and (as is the case in almost every other good work) a number are women”–an urgent, forceful, self-propelling mixed-race group of women who had formed the Pennsylvania Female Anti-Slavery Society.

These women, mostly hidden from history, are the subject of a startling play written and directed by New York playwright Ain Gordon in collaboration with Philadelphia artist and filmmaker Nadine Patterson, “If She Stood,” which opens tomorrow night at the Painted Bride. “Not only were they campaigning about anti-slavery,” says Gordon, “but they were imagining a women’s movement–on their feet in front of people inventing a language of protest. That had no precedent.”

“All my work is about the way society codifies certain stories in its history. Some are chosen and some are not.” 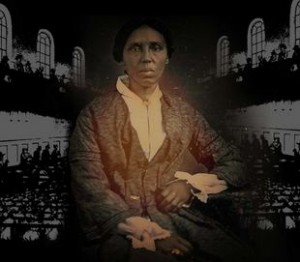 Promotional image for the play “If She Stood,” premiering at the Painted Bride

In the lives of the Grimké sisters, Sarah Mapps Douglass, Sarah Pugh, Hetty Burr, Mary Grew, and Hester Reckless, Gordon means to explore the way the leaders of political movements and the movements themselves are co-creating.

“Sarah and I went to the World Anti-Slavery Convention, London,” says Gordon’s imagined Mary Grew in the play. “Dreamed, I’d make my name. Admit that. Well, reform work–the one work we women could try. I had to climb that one offered ladder.”

For Angelina, who would speak on day three of the opening convention of Pennsylvania Hall, the ladder was her sister Sarah, who brought her into the movement and drew her to Philadelphia from the Grimké family home in Charleston to take up the cause. Where Sarah was reticent, Angelina was charismatic and self-assured.

By the time Angelina took the podium on May 17, an angry mob had begun to assault the new building. In that moment, she wasn’t going to be denied. “What is a mob,” she asked. “What would the breaking of every window be? Any evidence that we are wrong, or that slavery is a good and wholesome institution? What if that mob should now burst in upon us, break up our meeting, and commit violence upon our persons–would this be anything compared with what the slaves endure?”

The mob, of course, would break through, and the building would soon burn–and Angelina would never speak in public again.

For the playwright Gordon, who “resists all attempts to lock history in an amber glow” and who wants to see the struggles of the Female Anti-Slavery Society in the light of contemporary equality movements, there is more to the story: another Angelina Grimké, two generations removed, who carries on the dream of the possible city.