The Other Philadelphia Experiment 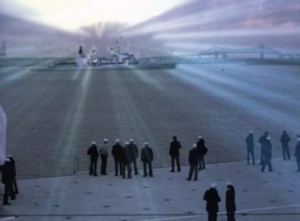 On April 21 at 1 pm, Independence Seaport Museum will host a screening of The Philadelphia Experiment as part of the Cinedelphia Festival; the movie ticket is included with regular museum admission.

Everyone knows about Benjamin Franklin flying a kite during a lightning storm in the mid-18th century. The legend of the kite and key was one variation on the scientific study that came to be known as the Philadelphia Experiment. Some people assert that it’s a myth since Franklin’s accounts of it are sketchy. Nevertheless, the general historical consensus is that Franklin did indeed fly his electric kite.

There have been, however, other examples of well-known scientific experiments in Philadelphia that have also been referred to as the “Philadelphia Experiment.” The most infamous was Project Rainbow.

Scholars, conspiracy theorists, and others have alleged that in the summer of 1943 at the Philadelphia Navy Yard the US Navy was experimenting with degaussing technology and other methods to attain radar invisibility for ships on the high seas. The result was a powerful yet dangerous cloaking device.

Sometime around October 28, 1943, according to accounts, a very strong magnetic field somehow encircled the destroyer escort USS Eldridge (DE-173) and its crew. A green haze came over the ship and its men began to disappear in front of others. The entire destroyer then disappeared in a flash of blue light before the eyes of people watching on the dock. At the very same moment, the Eldridge appeared in Norfolk, Virginia, then vanished and re-appeared. Several sailors were hospitalized after the experiment, according to those who have attempted to bring the story to light; a few died, others became deranged. Crew members were also supposedly subjected to brainwashing so as to maintain secrecy about the experiment. 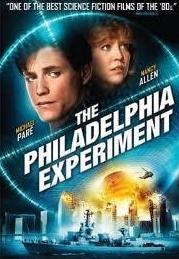 The Project Rainbow incident is cited in the book The Bermuda Triangle (1974) by Charles Berlitz and in an appendix to Uninvited Visitors (1967) by Ivan Sanderson. Indeed, several books, both non-fiction and fiction, have been written about the 1943 event. Furthermore, a John Carpenter film entitled The Philadelphia Experiment was released in 1984; Philadelphia Experiment II came out a few years later. And The Final Countdown (1980), a much more popular motion picture, incorporated elements of all this.

Project Rainbow is widely regarded as a hoax, but it has captured the imagination of government conspiracy theorists for decades. Aspects of this particular “Philadelphia Experiment” are featured in other fringe theories.

So what about the USS Eldridge? The ship was a Cannon-class destroyer escort launched in early 1943. It made it through World War II and was decommissioned in 1946, then held in reserve. Transferred to Greece in 1951 under the Mutual Defense Assistance program, the Eldridge served with the Greek Navy as the HS Leon (D-54) until 1992. The ship was then placed out of commission and was sold for scrap in 1999.

The Philadelphia Experiment plays at the Independence Seaport Museum on Sunday, April 21st at 1PM, as part of the Cinedelphia Film Festival. For more information, visit their Facebook page HERE.