The Geography Of Retreat

Across the city, neighborhood institutions are closing down for lack of money, attendees, or both. The Philadelphia School District closed eight public schools last year, and voted on March 7th to close a further 23. The Catholic Church also suffered losses in 2012, closing four schools and ten churches. These institutions, sacred or secular, are not just buildings, but pillars of the communities they serve, often the anchors of poorer neighborhoods.

Hidden City wanted to determine the pattern of which communities have been hardest hit by these losses over the past year, and which might lose the most when the inevitable next round comes. Having plotted the schools and churches on a map, we’ve discovered, perhaps predictably, that the pain is not evenly distributed. The same neighborhoods are continually affected. What follows is the spatial analysis detailing these neighborhoods, with an interactive map at the end for a broader picture. 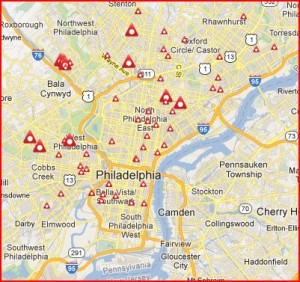 This image shows the religious landscape of the city. The large triangles are the ten Catholic churches that were closed in 2012 as part of the Archdiocese’s Pastoral Planning Initiative. The fifty-four smaller triangles are worship sites of all denominations that are currently vacant. There are very few of these in the center of the city, but a wide scatter-shot pattern across the north, south, and west. The Archdiocese is still deliberating whether to close churches in South Philadelphia. It plans to vote on the issue some time this spring. 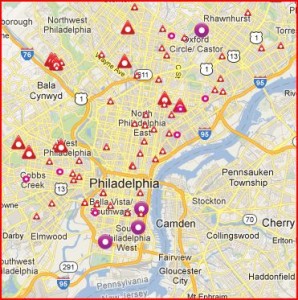 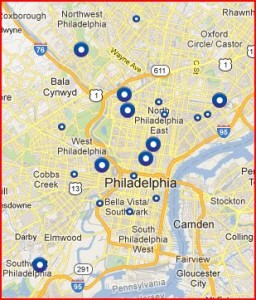 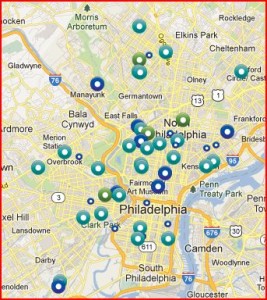 This one shows all of the above plus the schools that will close in 2013. These are indicated by turquoise circles. Four schools previously considered for closing were spared in a vote on March 7th. The damage will again be widely distributed, with much of the closings located in the northern half of the city. The Brewerytown neighborhood will be especially hard-hit.

Finally, the map in full. You can zoom in and out by using your mouse wheel or the +/- buttons in the upper left. Mouse over each location to see the name of the institution.

Click here to see the map in a new window.

Layering the data from churches and schools which are closed, closing, and threatened to be closing, it paints a picture of the geography of retreat. Institutions in all directions across the city are closing down, while the center remains relatively intact. North Philadelphia and the outlying districts like Manayunk have lost the most churches and schools. This coincides with demographic shifts that have been going on since at least the 1970s. The map makes one thing clear: neighborhoods that have lost schools and churches in the past are about to lose more.

We’d like your help to make this map as complete as it can be. Notice something incorrect? Know of something that’s missing? Please let us know in the comments.

Special thanks to Ben Leech of the Preservation Alliance of Greater Philadelphia and to Rachel Hildebrandt of Partners For Sacred Places for their assistance.