Striking A Chord For Liberty 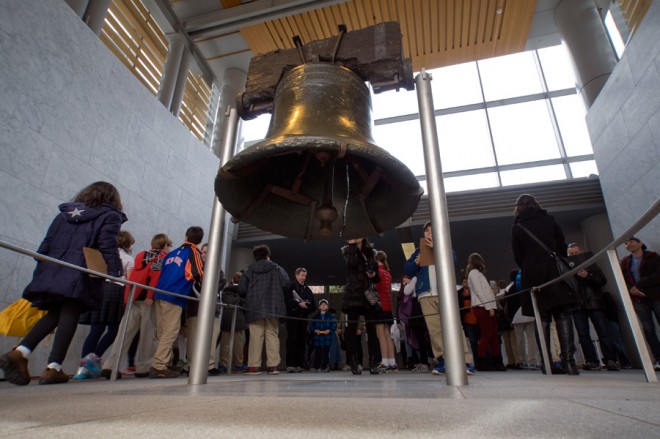 Stay behind the rails: at the Liberty Bell Center, 2013 | Photo: Bradley Maule

Twelve years ago tomorrow, the Liberty Bell was rung for the first time in decades. Mitchell Guilliatt, a Nebraska man inspired by the scripture on the shoulder of the bell—”Proclaim LIBERTY throughout all the Land unto all the Inhabitants thereof”—struck the bell with a mini-sledgehammer while saying “God lives,” and was subsequently arrested. I spoke with him this week to ask him why, and to examine if our liberty has changed since then.

“The scripture on the bell was an inspiration to me,” Guilliatt says. “Liberty is something God gives and men receive.”

The full verse, Leviticus 25:10, reads, “And ye shall hallow the fiftieth year, and proclaim liberty throughout all the land unto all the inhabitants thereof: it shall be a jubilee unto you; and ye shall return every man unto his possession, and ye shall return every man unto his family.” In addition to foreshadowing abolition, the 50 year figure is significant, as the bell was cast on order of the Pennsylvania Assembly in 1751 to commemorate the 50th anniversary of the Charter of Privileges. The Charter, Pennsylvania’s first constitution, was written by William Penn on his second, and last, visit in 1701. And, incredibly, 50 years to the day from the signing of the Declaration of Independence, both Thomas Jefferson and John Adams died on July 4, 1826.

“It was my intention from the start to ring the bell,” Guilliatt says of the 2001 episode. “[I packed] a four pound mini sledgehammer. The bell weighs 2,080 pounds and the clapper is 44½ pounds. So I thought I needed something with a bit of weight.”

There’s something inherently paradoxical about wanting to take offense to someone striking a national icon to the freedom that makes us who we are. How dare he hit the Liberty Bell because he has the liberty to do so? Officials at Independence National Historical Park have been grappling with this paradox since its inception. 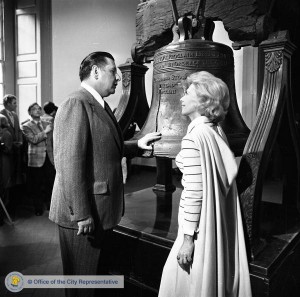 “We have a duty to balance preservation and the visitor experience,” says park spokeman John Warren. “This history is ours—not just America’s, but the world’s.”

Just how much access the public has had to the Liberty Bell has fluctuated across its post-Revolutionary history. Its iconic prominence was already well established by the Centennial Expo in 1876; officials chose to create a replica to sound at the fair rather than repair or move the already-cracked bell to the Expo grounds in Fairmount Park. Still, thousands of visitors who made the trek to Philadelphia made sure to come to Independence Hall to see the original bell whose image was so associated with the Expo. Over the next forty years, the Liberty Bell came to them.

Traveling to seven separate fairs and expositions as far as Chicago, New Orleans, and San Francisco, the City of Philadelphia, who owned and still owns the bell, grew increasingly agitated with each far off request. In its travels, the Liberty Bell was visited, touched, and even kissed, by millions of people. When it returned from Chicago in 1893 more damaged than when it had left, the City placed it in a glass case for display at Independence Hall. Perhaps sensing the heavy handedness, the City removed it from the glass in 1898, but protected it with a guard. 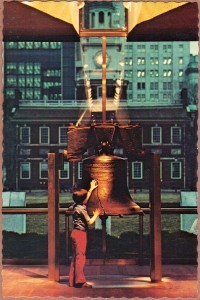 Leading up to the Bicentennial in 1976, an upswing in patriotism drew larger crowds of people who wanted to “touch history,” park spokesman Warren describes. “As a kid visiting from Texas, I was surprised I was allowed, even encouraged, to touch the bell,” he remembers.

Of course, this access eventually takes its toll on a centuries old relic. “The bell has seen its share of abuse,” Warren says. “People would place stickers and postage stamps on the crack, and scratch it with coins.” As well, the oil and salt from the touch of people’s skin slowly ate away at the bell’s surface; observe the shine on the horns of Billy, the Rittenhouse Square goat, and the nose of Philbert, the Reading Terminal Market pig. In the 1990s, the National Park Service drew back from the wide open policy, and placed a rope around the bell, still within visitors’ reach.

When Mitchell Guilliatt rang the Liberty Bell on April 6, 2001, it forced the National Park Service to re-examine its policy of access. “The bell is bronze, a softer metal, so permanent damage was done [by Guilliatt’s hammer],” park spokesman Warren says. “It’s hard to notice, and it was cosmetically repaired, but the damage is there if you look for it.” (I did look for it on a recent visit to the Liberty Bell Center and could not find it; the volunteer on hand only vaguely recalled the 2001 incident, and could not identify any damage to the bell beyond the iconic crack.) Ultimately, the bell was left open but behind a rope, with increased security presence. Five months later, the terrorist attacks on America gave even greater weight to the policy.

After only 25 years in Mitchell/Giurgola’s pavilion, where the bell stood on its own merit and visitors were free to walk in, the Park Service already had plans in action to move it to a new home with a more comprehensive experience. Now post-9/11, security was of higher concern. But as the Liberty Bell Center was still two years away, a more stringent security station was installed at the front of the pavilion. After the bell was moved to Bohlin Cywinski Jackson’s center in October 2003, the old pavilion was, at least for a short time, used for security screening, including a metal detector—on the very spot the bell had stood since 1976. 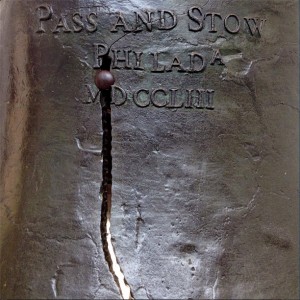 The zigzag that’s been filed and screwed for stability is only the famous part of the crack; a hairline crack continues through Pass and Stow’s names for a length of 2’4″ | Photo: Bradley Maule

In April 2013, the Liberty Bell Center provides a “contemplative context—you’re here to think about the bell, not touch it,” Warren explains. But to reach the contemplative exhibits elaborating the bell’s history and significance, you must first wait in line, have all bags inspected, open and lift up your jacket. At the bell itself, the ropes have been replaced by waist high metal rails that are farther back. That is, you have to go out of your way—and be more noticeable—to touch the bell.

There isn’t a policy against touching the Liberty Bell per se; rather, it’s up to the discretion of the park ranger on duty. For example, visitors who are blind and former political prisoners are given greater consideration. But generally speaking, it’s frowned upon, and rangers reserve the rights to say no to those who ask to touch it.

The bell is still occasionally rung; sort of. Twice a year, on the Fourth of July and National Freedom Day (February 1st, commemorating the day President Lincoln signed the 13th Amendment, abolishing slavery), the Liberty Bell is ceremonially tapped—not rung—by a percussionist’s mallet wrapped in sheepskin.

“Have you ever thrown a rock into the water and watched the wake cascade out in circles?” Guilliatt asks. “Well, sound travels similarly, except in all directions. The dull thud of that 2,080 pound bell tuned to the key of E-flat sounded that day and the wake was set in motion. Liberty was the tune it played. And ‘God Lives’ is the song I sang.”