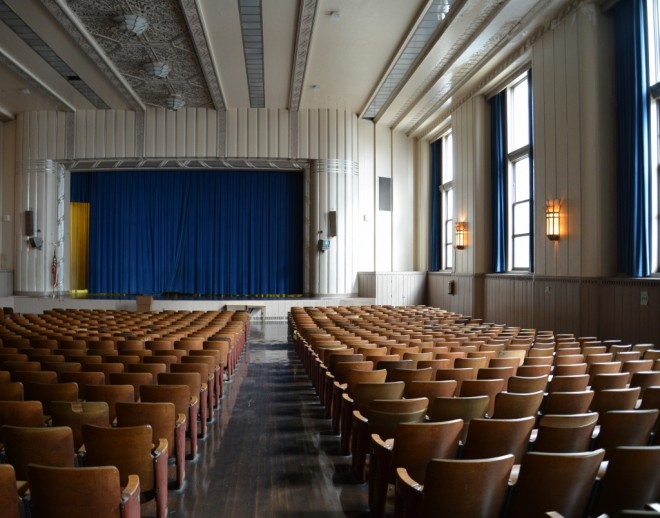 The theater is one of the most expressive and useful instruments for educating a country; it is also the barometer by which one can measure a nation’s greatness or its decline. A sensitive and well-rounded theater (in all its many forms), from tragedy to vaudeville, can change the sensibility of a country in only a few years; and a theater which has been destroyed, where wings have been replaced by hooves, can vulgarize a whole nation and induce them to sleep. The theater is a school of tears and laughter. It is a free and open arena where individuals can expose to the light old or faulty morals, and illustrate with living examples the eternal principles that guide the heart and feelings of man. – Federico Garcia Lorca, 1935

In less than two months, Philadelphia will add to its ranks another “theater which has been destroyed,” the auditorium of Bok Technical High School (profiled yesterday HERE), a little known but beautifully well-preserved 1,000 seat Art Deco showcase, built in 1938 by the Works Progress Administration. Thanks to the Philadelphia International Festival of the Arts and the group COSACOSA, the public has one last opportunity to experience the auditorium while the school is still open (its fate after this June is unknown), four performances of the musical Spare a Dime today through Sunday.

The biennial PIFA, now in its second year, brings artists from all over the world to Philadelphia for a month of performances throughout the city. In accordance with this year’s festival theme of time travel, the audience for Spare A Dime will be transported to the Great Depression and then back again to our current lingering Great Recession.

An impressive collaboration between a diverse array of artists and community members, Spare A Dime bills itself as an “interactive, theatrical song cycle retelling true stories from the Great Depression and exploring the impact of the WPA on diverse communities.”

Director and composer (also COSACOSA co-founder and president) Kimberly Niemela explained the creative process: “first we brainstormed what would resonate with the audience and then began to collect stories and interviews from people affected by the Depression and Recession. From these stories, we pulled archetypes such as ‘merchant,’ ‘builder,’ or ‘veteran,’ creating song cycles that would weave their stories together.” There are seven singers in the show, among them the archetypes and President Franklin D. Roosevelt, whose song Niemela crafted by stringing together FDR speeches, reworking them slightly to make them rhyme. 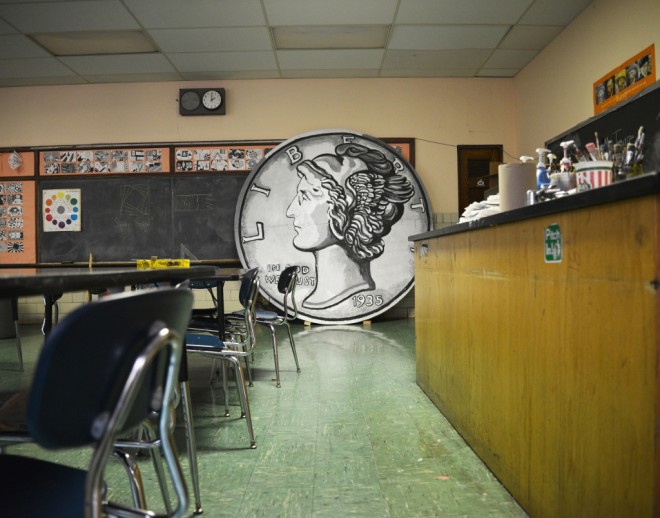 In searching for a venue, CosaCosa discovered that Bok Tech was one of the only entirely WPA-built buildings in Philadelphia. They approached the school and began working with art teacher Steve Teare, engaging his students in games and conversations about social themes and communities banding together. They designed posters in the iconic WPA style, and created their own personal liberty dimes, and created a gigantic liberty dime (a key part of the Spare A Dime set), along with projections of Teare’s illustrations, which were animated by Gerardo José McGarity-Algrett.

Having worked with the Mural Arts Program last year to create a large photo mural across the street from Bok, Teare is no stranger to facilitating collaboration between outside groups and his students. “I don’t like to force political or social issues with the students, I’d rather it came about naturally,” he says. “Students bring it up on their own, it’s more meaningful to them if it’s intrinsically motivated.”

“With these sorts of partnerships, you get an idea of the ideal of what education should be, with many different teachers in the classroom,” says Teare. 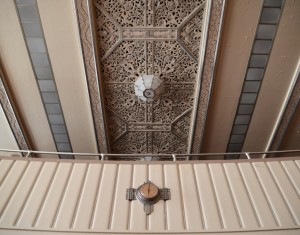 The composer Niemela hopes that the PIFA performance is only the first iteration for Spare a Dime. Her master plan is to continue to collect more stories and eventually take the show on tour. A sound installation featuring some of the recorded interviews is also in the works, as part of a community garden project CosaCosa is spearheading in North Philly.

The closing of Bok Tech is unfortunate on many levels, but the use of the auditorium for this performance is an opportunity to see the classic auditorium in its intended use before the doors close. It’s hard to tell what its condition will be like the next time the Hidden City Festival rolls around.