Hangin’ With The Ghosts Under City Hall 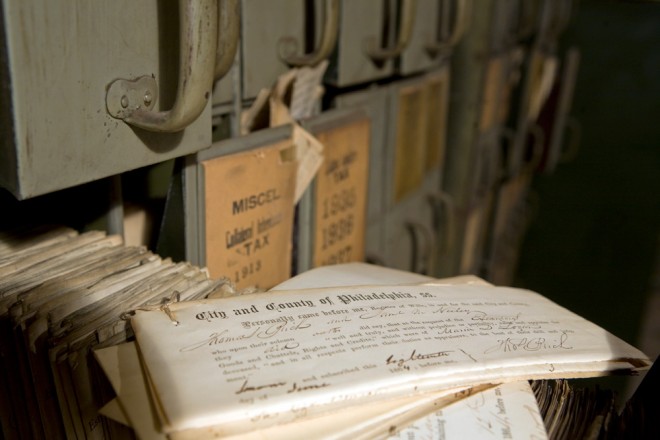 A will from the City and County of Philadelphia, pre-1854 consolidation | Photo: Bradley Maule

Ed. note: This is a companion piece to Sam Robinson’s story, Digging in the City’s Basement.

When the Police Department moved into the Roundhouse in 1963, they didn’t leave a whole lot behind in their former headquarters, the basement of City Hall. But the enormous underground floor was by no means left empty. Numerous other departments kept rooms and records there, workshops kept (and still do keep) welders, carpenters, and electricians busy, and oh by the way, the entire building’s power is sourced there. There’s also a giant water main, and lower still underground, both subway lines pass beneath the building, still the largest masonry edifice in the world.

I accompanied Sam on his journey last week to see the basement in person. While there, we encountered a yellowed Inquirer from 1981 opened to a news story with the headline “The Boss Tunes Up for Philadelphia,” previewing Bruce Springsteen’s five-night Spectrum run on The River Tour. This was a highlight among others that included a rodent station dated 1995, political stickers of all persuasions, and a deflated mylar Phillies balloon, presumably from 2008. (Or possibly from this week.) There was also a records room full of priceless books and cabinets with wills and testaments dating to the early 19th century. And of course, we got a worms eye view of the building’s cornerstone—the cornerstone that’s visible from above in the North Portal at North Broad Street.

These 25 photos are from all corners of the basement of City Hall. Click any image below to launch.

Special thanks to Adam, Rob, and Joe for the assistance and information.