Great Depression To Great Recession: The Life And Death Of Bok High 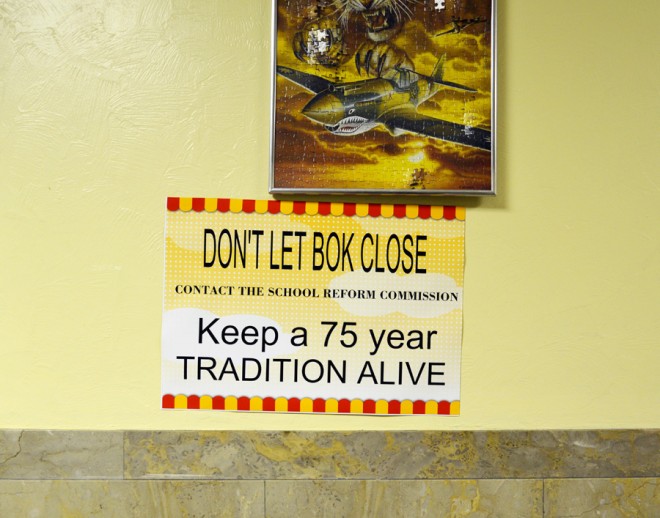 On March 7, 2013, the state-charged School Reform Commission, citing massive budget shortfalls, voted to close 23 of Philadelphia’s public schools, shuttering about 10 percent of buildings within the district. Edward W. Bok Technical High School, at 8th and Mifflin Streets in South Philadelphia, is among the 23. (With the SRC’s decision this week to spare the Beeber Middle School, the list was reduced to 22. For a comprehensive report on the impact of these school closings, click to a special report at AxisPhilly HERE. For Hidden City’s comprehensive map of school and church closings, click HERE.)

Built in 1938, Bok Tech is one of the only school buildings in the city entirely financed and constructed by the Works Progress Administration. More of a limestone castle than an ivory tower, Bok is one of the last remaining schools designed by Irwin Catharine and one of only four schools within the district that offers vocational training to its students. 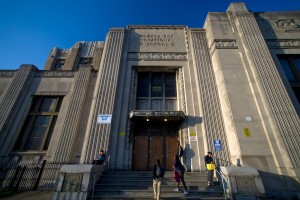 Waiting for the bell at Bok | Photo: Bradley Maule

Over the years, the career and technical education programs that Bok has offered its students have changed substantially. At one point there were two television studios, a cosmetology program, and a screenprinting workshop, among others.

Robin Ricca-Bouden, a culinary arts instructor at Bok Tech for the past four years, agreed to speak with me about her program, which she says is entirely different from the traditional home economics. “The students work in a restaurant setting both in the kitchen and in the front of the house or at the cafe,” she says. “The students learn all aspects of how a real restaurant is run by developing culinary skills, restaurant management, and hospitality. I teach both a hands-on experience along with book work from a variety of texts.”

Ricca-Bouden stresses that career and technical training is important because not every student is destined for college. Many students learn best with a hands-on approach and the experience gained while still in high school gives them an opportunity to learn a trade and enter the workforce right after graduation. Some of her students have found part time jobs in their fields before graduating.

“The skills that the students learn are in need every day. Where would we be without any carpenters, nursing assistants, electricians, auto repair technicians, or culinary artists?” she asks. “So many careers are started in schools like Bok. Not only are they working, they are supporting themselves, and some of them are even supporting their families.”

Before and After the Depression 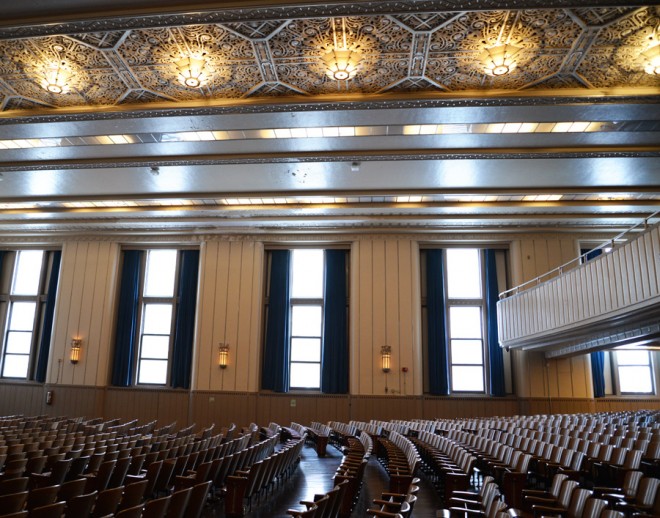 Remnants of the 30s in the auditorium | Photo: Katrina Ohstrom

The combination of a liberal arts education and a technical apprenticeship, vocational education rose to prominence during the first World War when the nation needed trained, skilled workers to support the war effort. Immediately after the war, an economic and industrial boom resulted in growing demand for skilled workers, and new vocational schools were built to train new generations of wage earners.

The schools were so prosperous in fact, that it took until 1932 for the depression to fully hit them, as battered banks demanded repayment of loans and successfully lobbied for cuts both to programs and teacher salaries to compensate for budget deficits.

As a result of these austerity measures, class sizes increased, schools closed and funding for programs including vocational education all but dried up as the anemic schools were stripped down to the the bare academic minimum.

As the depression trudged along, local financing of schools evaporated. Many people didn’t have the money to pay their property taxes and large numbers of citizens simply refused to. Tax revolts became a popular form of protest as thousands of “tax leagues” sprung up around the country, demanding cutbacks of federal spending and lobbying for a smaller, leaner, more localized government.

State governments stepped in and attempted to fill the gap in education budgets. This led to both standardized curricula and financial practices, as often times the funding came in the form of foundation grants, which distributed money equally among individual districts (and had the unfortunate side effect of perpetuating the inequality of education between poor and more affluent districts).

The Roosevelt Administration got minimally involved with some initial financial assistance. The Federal Emergency Relief Administration paid some $14 million in teacher salaries to help keep schools open, and the Reconstruction Finance Corporation helped with some of the massive debt that districts owed to banks. It also leveraged federal funding for non-educational projects against states who threatened to cut funding for schools.

Traditional mindsets regarding the federal government’s hands-off relationship with public education eventually won out, however, and the majority of New Deal support ended up being delivered not as direct financial assistance, but rather through the Works Progress Administration, the National Youth Administration, and the Civilian Conservation Corps, which focused on employment and infrastructure improvement rather than institutions and organizations.

In addition to physical improvements to infrastructure, public education underwent a paradigm shift as it was demonstrated that poor children could be successful if they were provided with the proper tools and not handicapped by their circumstances. This sort of radical egalitarianism didn’t sit well with traditional educators, as it served as a bold challenge to the elitism and traditional power structures that had been the status quo for as long as anyone could remember.

By the late 1930s the economy had begun to recover. Steadily improving private sector employment caused the WPA to change course and focus on vocational training, preparing students for factory jobs. Labor unions had been fighting this for some time (in fear of an oversaturated jobs market) but with the advent of the Second World War, unemployment virtually disappeared and the country saw a resurgence of popular support for vocational training, as skilled civilian workers were needed to support the war effort yet again. 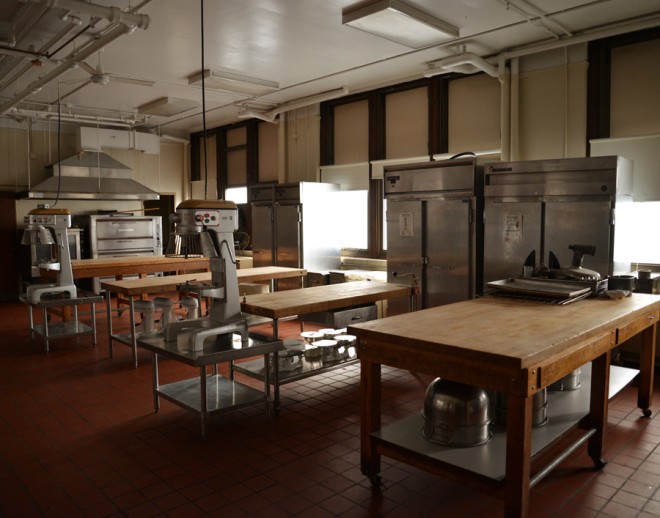 What next for food prep? | Photo: Katrina Ohstrom

Lost by the Great Recession

Concerned about what will happen after Bok Tech closes this spring, Ricca-Bouden says, “many of my students are not going to attend a culinary program next year and I have some great students that have opted to go to a comprehensive school instead of a Vo-Tech school. I’m hoping they won’t get lost in the shuffle of the school district. Many of the students that come to Bok say that if it wasn’t for their shop classes they would have no interest in coming to school at all.”

Senior Jacquelyn Palillero, age 17, says that her favorite things about Bok Tech are the vocational classes and credits the culinary program with giving her the “advantage of learning many things and a great teacher to teach you hands-on.” Palillero adds that Bok “has made a huge impact in my life by helping me choose the right industry to pursue.” Next year she will be attending college for culinary arts.

It’s easy to romanticize schools that are slated for closure, particularly when they are housed in beautiful and historic buildings, but the decision of the SRC to shutter Bok Tech–ham-handed as it may be–was not entirely arbitrary. An aging building is expensive to maintain and operate even when it is operating at full capacity, but when enrollment drops, per pupil cost skyrockets.

Many schools have been operating under capacity (many at less than 60 percent), for years, as charter school enrollment has steadily increased, siphoning students out of their neighborhood schools. A detailed analysis in 2011 revealed that there are over 70,000 empty seats district-wide.

The 2011-2012 school year saw Bok operating at less than 60 percent capacity, with only 914 students between all four grades. The building is huge and with steadily declining enrollment, the per pupil cost to maintain and heat has steadily increased. The top two floors of the building have been sealed off for years (to comply with fire code), and cannibalized for replacement floor tiles and lighting fixtures to maintain the lower floors. Without a librarian to staff it, the library has also been closed for years. 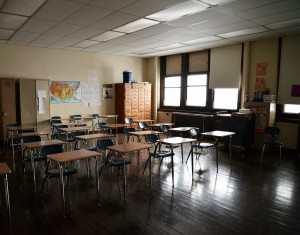 According to School District data, more than 21 percent of students at Bok have disabilities; more than nine percent are English language learners and nearly 94 percent are economically disadvantaged. All of these factors increase average education cost per pupil.

The decision to close Bok Tech will have other ramifications. Southwark Elementary, just across the street, shares Bok’s boiler. Even empty of students, Bok can’t be decommissioned (and put to another use) until Southwark has an independent heating system. This seems unlikely given the dire financial straits of the district. Bok will quite possibly sit vacant for years to come.