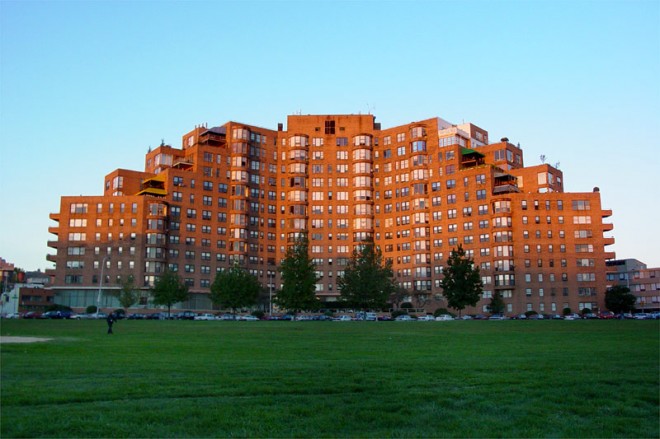 A golden glow on the Parkway | Photo: Bradley Maule

As a mammoth modernist apartment building at 22nd Street and Pennsylvania Avenue prepares to turn 60, its celebration seems appropriately opportune. Designed by the partnership of Elizabeth Fleisher and Gabriel Roth, the Parkway House opened in 1953, the first major Philadelphia building to be designed, in part, by a woman.

Thanks to comments made by legendary architect Denise Scott Brown at an Architects Journal luncheon, female architects are a current topic of conversation. Scott Brown, who has had an integral role in the development of post-modernist architecture and theory, stated that she should be retroactively recognized for the Pritzker Prize her husband and partner Robert Venturi won in 1991. This has re-ignited the debate of women’s recognition in the field, even inspiring a petition, supported by former recipients Rem Koolhaas, Jacques Herzog and Pierre de Meuron, demanding acknowledgment of Scott Brown by the Pritker Prize.

Born and raised in Philadelphia, Fleisher received her Bachelor of Arts from Wellesley College in 1914 and her Master of Architecture in 1929 from the Cambridge School of Architecture, then associated with Smith College. In 1934, she became the fourth woman in Pennsylvania to obtain an architecture license. She returned to Philadelphia to work at the firm Simon & Simon, where she remained until 1931. After that, Fleisher took on research in building economics and housing, which brought projects under the firm names of Fleisher, Janney & David, Fleisher and Stephens, and Fleisher, Stephens & Fleisher. In 1941 she partnered with Gabriel Roth in forming the firm Roth & Fleisher, where she would remain until her retirement in 1958. With Roth, she worked on theaters, factories, and residential buildings; most notably the Parkway House, for which Fleisher was the design architect. 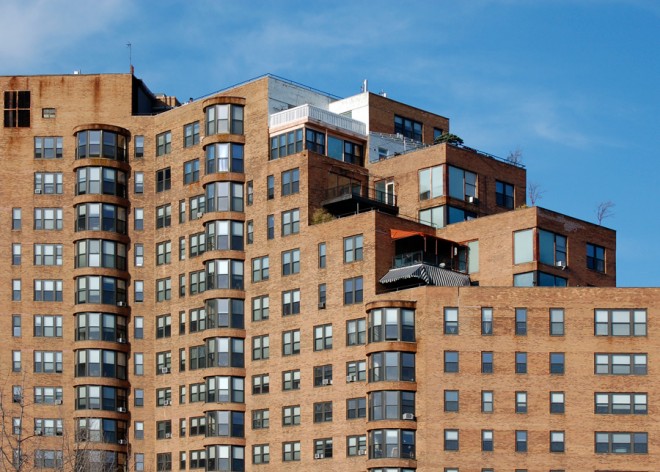 Finished in 1953, the Parkway House was one of the first postwar luxury apartment buildings in Philadelphia. Located adjacent to the Rodin Museum, Ben Franklin Parkway, and Philadelphia Museum of Art, its communal roof deck has become a prime spot to observe the city’s many festivities. In 2012, the building was a backdrop for the two day Made in America concert and the Open Air light installation.

Although very much a Modernist design, the 14-story brick clad concrete and steel building contains elements of both the Art Deco and International styles. Its ziggurat-like form responds to its context by stepping in at each floor towards the east and west, allowing for private terraces and expansive views towards the city skyline and PMA. The first floor serves as a public plinth on which the residential floors sit. Although most of the first floor has been converted into residences, the original design included both residential and public amenities. Prior to this conversion in 2012, a notary, a pub, and a deli all provided services to the building’s tenants and neighbors. The glass entry fronts a private driveway and a communal terrace that faces recently renovated Von Colln Memorial Field. 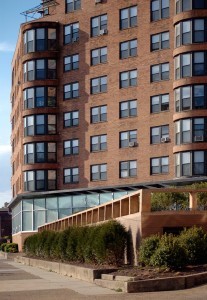 Fleisher included semi-circular bay windows to decorate the façades along Pennsylvania Avenue and 22nd Street. These windows give depth to an otherwise flat composition and allow large amounts natural daylight into the most desirable spaces. The north façade along Spring Garden Street has a simpler design approach. The stark brick wall is interrupted only by punched openings which grow in height at upper floors, accommodating more generous ceiling heights and northern views. This northern form also jogs in at multiple corners, creating additional corner units with wide sweeping views.

Her research in economics and housing allowed Fleisher to develop a variety of residential unit types. The 231 units range in scale and size from small studio apartments to two story multi-bedroom units with square footage ranging from 350 sq ft to 5,000 sq ft. The communal roof deck, a take on Le Corbusier’s Five Points of Architecture, allows residents that don’t have one of the private terraces to enjoy 360° views of the skyline.

With the Parkway House, Elizabeth Fleisher had an intrinsic hand in the evolving fabric of the Ben Franklin Parkway. In November of 1989 the American Institute of Architects Philadelphia designated the building a Philadelphia Chapter Landmark, recognizing both Roth and Fleisher. The commemorative plaque is visible in the lobby, a testament to the role of women architects in Philadelphia.