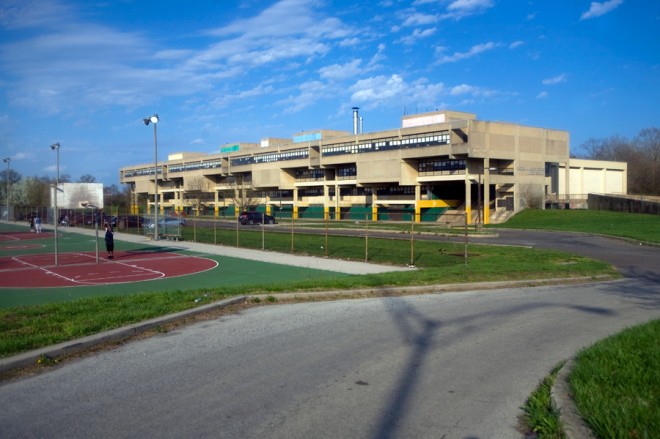 At 84th & Lyons in Eastwick, tucked between the John Heinz National Wildlife Refuge, I-95, and industrial Southwest Philadelphia, with planes from the airport buzzing overhead, George Wharton Pepper Middle School’s location on a relatively remote corner of the city is proving its undoing.

With an enrollment of 413 this school year—its capacity is 1,176–and the majority of the students bussed in from other Southwest Philly neighborhoods—Pepper is one of the 22 schools earmarked for closure this June, and eventual sale, by the School District of Philadelphia. Beginning in the fall, students will feed into Tilden Middle School, whose overcrowding Pepper was originally meant to relieve. It spells an unfortunate end to the relatively young school.

Conceived in 1968 as the focal point for a new Eastwick Community Educational Complex—Pepper is right next to Communications Technology High School, designed by Irwin T. Catharine and opened in 1926 as George Wolf elementary school—the development was to have housed both Eastwick High School and Pepper Middle School, as well as a new parochial school. But, just as the enormous urban renewal plan for Eastwick never saw full buildout, the resulting campus only saw the construction of Pepper, a gargantuan concrete monolith situated amongst ample green space and a large recreation center. 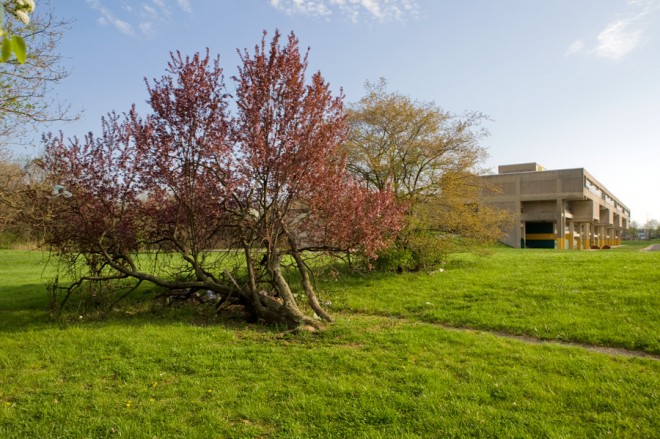 Outdoor space is a major component of the Pepper campus | Photo: Bradley Maule

The School District of Philadelphia selected Caudill Rowlett Scott, a Houston based firm riding a wave of popularity from its school designs of the 1960s, most notably Public School 219—the “dome school” showpiece at the 1964 World’s Fair—for the design; Bower & Fradley, the predecessor to Bower Lewis Thrower, was the local project architect. A Philadelphian exemplar of brutalism, Pepper’s broad concrete exterior, like its contemporary William Penn High School (designed by Romaldo Giurgola and opened in 1973), is so daunting it almost dares you to step inside and learn. Incidentally, Penn High closed in 2010.

The architects’ vision for a combined Eastwick High/Pepper Middle School was approved by the School District in 1969 and won a silver award from the Philadelphia chapter of the American Institute of Architects, as well as recognition from Progressive Architecture magazine. But the Art Commission, which reviews all city-owned construction projects, rejected the design, saying, “the plan lacks the humanity element and should be given a more-breathing element. It is entirely too concentrated.” 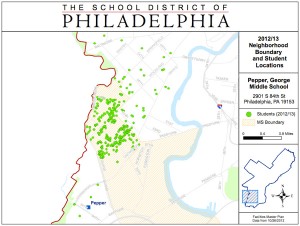 Most of Pepper’s students have to travel a good distance to get to school | Image: School District of Philadelphia

This haggling delayed construction for two years; by the time construction was nearly finished in 1973, the high school portion of the plan was axed and a revision made necessary. Another Art Commission revision in 1975, with the school again near completion, called for a gymnasium, auditorium, central administration, and library facilities that were not a part of the original plan. CRS withdrew from the project and Ballinger Company executed the addition. Finally opened in 1976, the middle school was dedicated to George Wharton Pepper, a Philadelphia native, US Senator from Pennsylvania, and the founder of the Pepper Hamilton law firm.

Even as Eastwick was one of the few neighborhoods in Philadelphia to grow between 1970 and 2000, Pepper’s population has slowly declined, with students transferring to schools closer to their homes, or to charter schools. But where Pepper’s remote location has proven a liability to the School District, it’s also been an asset to its student body.

The recreational grounds, maintained by the City Department of Parks & Recreation, are large enough to accommodate a playground, three baseball diamonds, four tennis courts, and five basketball courts. The John Heinz National Wildlife Refuge is a ten minute walk away, and the nine-acre Eastwick Community Garden is the same distance in the opposite direction. The school has partnered with each to provide important programs to the predominantly African-American school.

At the Garden, for example, there is a Pepper Pride Garden, where Rebel Gardeners grow fruits and vegetables, maintained throughout the summer and sold at various markets including Clark Park. At Heinz Refuge, 5th graders engage in a biweekly, hands-on environmental education program in which they perform solar energy experiments, build bird feeders, and study migratory birds and other wildlife. 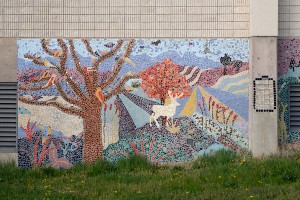 The influence of the Heinz Refuge is reflected in a large mosaic on the south face of the school. Created in partnership with NetworkArts, students crafted the mosaic to depict over 240 species of birds, reptiles, amphibians, mammals, and insects native (or migratory) to the Refuge. The Tinicum Marsh, where the 1,200 acre Refuge resides, is the largest remaining tidal marshland in Pennsylvania.

The Refuge will be a central player if a local group succeeds in preventing the School District from shuttering the middle school. Pepper Partners in Pride, a grassroots organization cobbled together from organizations including Eastwick Action Committee, the US Fish and Wildlife Commission, Friends of Heinz Refuge, and Southwest Multiplex Community Plaza, proposes reusing the school in a mixed-use capacity: the retention of Pepper Middle School for grades 5–8 and a new Special Admissions High School for Sustainability and the Environment for grades 9–12 during the day, and a Community School for Educational Attainment for adults in the evening.

Such a plan would bring the original mixed-grade vision for the complex to fruition 45 years later. As of now, there are still three years for the School District to get on board.

A 20-photo essay of Pepper Middle School is just below. Click any image to launch.

The author would like to thank June Freifelder for her assistance on this story.