Filling The Square With The Empty Air 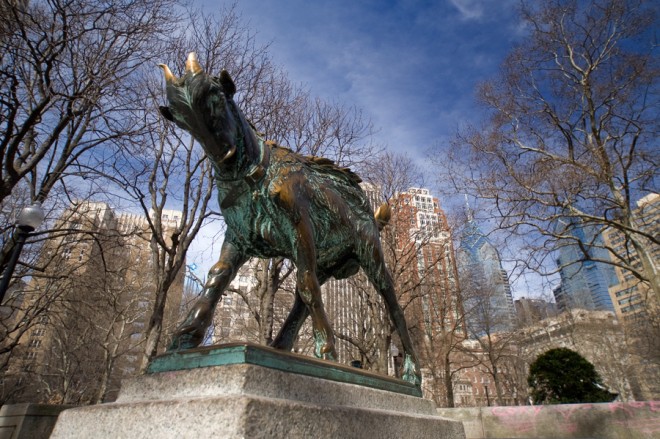 How’s the air up there, Billy? | Photo: Bradley Maule

With the days finally creeping toward something resembling spring, the city’s public spaces are filling in with color, and filling in with people sharing the utmost city experience. At Philadelphia’s preeminent public space, a new art installation goes live today, but you won’t see it—and that’s intentional.

With The Empty Air, a 99¢ iPhone app officially launching today, The Mural and the Mint’s Mike Kiley presents Rittenhouse Square as a personal, sonic experience directed entirely by the user. The sound walk is GPS-based; walking through the park triggers various parts of the larger composition, which doesn’t necessarily have a beginning or an end. Walking from, for example, the corner of the park at 18th & Walnut, past the sundial sculpture and into the center of the Square, you might transition from the fade-up sound of rustling leaves, to a number that mixes church bells with a shuffling beat and bassline, to, ultimately, the “title track” of the app.

“I wanted the music to have a pop element,” Kiley says, “to be accessible, not obtuse.” Whittled down from days of recordings of the sounds in the park, Kiley and collaborators Eliza Jones (Buried Beds), Chris Ward (Pattern Is Movement), and Matthew Ricchini (Arc In Round) made music inspired by those sounds.

More over, his goal is to take smart phone technology to a place that doesn’t draw you to it. “This is an app that doesn’t require you to be engaged with your device,” he explains. “It’s technology that’s invisible and fits in your pocket.”

Kiley hopes that Rittenhouse Square is just the starting point for the sound walks. “I want my music to effect change in places that could use more foot traffic,” he notes, citing the Race Street Connector/Pier and Grays Ferry Crescent as potential future compositions.

The app, designed in partnership with South Philly’s P’unk Ave, is currently only available on iPhone, but Kiley hopes to expand to Android and other platforms soon. An opening reception for The Empty Air is at the Rittenhouse Tavern this evening at 8, with a live performance by The Mural and the Mint.