Downstairs at the MSB 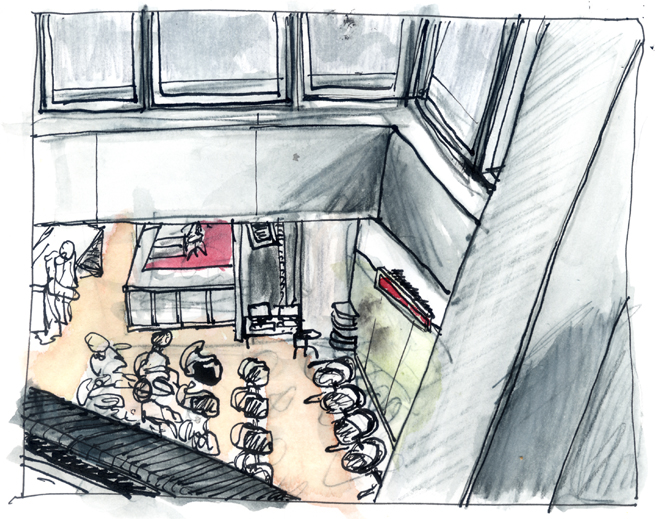 In the basement | Illustration: Ben Leech

Grono’s business, which he began in 2006 with two employees, now maintains an average of eight small and large scale projects at any given time, five full time employees, and 12 percent annual growth. Yet even with this success, it baffles him that each trip to L&I has to be so fraught with anxiety.

As a child Grono moved around a lot. His father had a penchant for buying “fixer-uppers”, leaving young Kenny to spend most of his childhood in a construction zone. He attended nine schools and lived in 12 houses before leaving for college. When Grono began his undergraduate studies at Villanova, his father purchased a house in Berwyn as an investment property for Kenny and his brother. Aside from the possible financial gains, his father hoped the boys would learn to take care of problems around the house.

Grono learned how to tile, refinish floors, wallpaper, and hang cabinets. One day, while roaming the halls of an academic building, he came across a pile of books and in the pile a futurist’s book about a tube that would wrap the earth and house all aspects of society: food production, transportation, work. “I thought that was cool,” he said. “That kind of got me thinking about people’s impact on the earth and wacky solutions to problems.”

The tube book led Grono to study Buckminster Fuller’s philosophies of creating greater efficiency in global systems. Ultimately, the encounter led to a master’s degree and a job teaching physics for seven years at Franklin Learning Center. During his second year of teaching he and Bronwyn began flipping houses. The third house marked a turn to green construction and exploring efficiency in design and building systems.

With only 20 minutes to get to his appointment, Grono promised to explain exactly what he wanted to accomplish at L&I once we arrived. Before we left, he made sure to grab all of the plans for each part of the project, two business checks, his personal check book, and the three different account numbers that he has been issued over the years due to dealing with different offices that don’t seem to link their information. It’s worth noting, however, that L&I was the first City department to release all of its data digitally—the past few years have seen a marked improvement to their web site www.phila.gov/li, for example—and they’re in the process of making plan reviews available online, which benefits both citizens and other City agencies.

With plans and expectations in hand, we climbed into his compact Ford Transit and made our way to L&I.

The function of L&I is to interpret and apply Philadelphia’s building, maintenance, and safety codes. According to the agency’s website, officials seek to “[facilitate] development through standardized practices for business creation, property maintenance, and construction activities. Our ideal approach is one that is proactive, collaborative, and replicable, in which citizens partner with city officials to improve their quality of life and that of their neighbors.”

As we pulled into a spot on JFK Blvd, Kenny put his contractor-parking permit in the window. It was an easy walk to the Municipal Services Building where L&I is housed. Designed by Vincent J. Kling and completed in 1965, the imposing MSB sits on a plinth between the construction sites at Dilworth Plaza and Family Court. The lobby is adorned with a massive seal of the City of Philadelphia. We descended the escalators into a coral of glass plated service windows. Just past the Water Revenue department are the partitioned offices of L&I.

We stood only number two in line. A man in front of us, who appeared to be a non-native English speaker, asked the receptionist for help interpreting the language some document or application.

“Yep, you just fill out that part,” the L&I receptionist answered politely but curtly.

As soon as the man walked away, the clerk turned to Grono. But before he could begin, the previous client pointed to the document and said, “Here?” The receptionist shook his head and told him to take a seat and another receptionist would help him.

Having now checked in, we walked straight into an office, where a secretary expeditiously filed Grono’s request, only stopping to ask very direct questions that required one word answers. After only a few minutes we were told to enter another waiting room where the inspector would meet us shortly.

Grono explained that after pulling three demolition permits, he was after an interior alterations permit. “It’s an easy process, and I’m sure it will be fine,” he said.

Easy, but not simple. The phase of the project would be a kitchen remodeling, which would require him to submit plans. It would be more efficient to roll that job into the one permit. “But I’m not officially showing the plans for this today, one because I’m not sure if these people will hire me to do the work, and if it all gets rolled into one now, the two days it will take to get an interior alterations permit will be turned into two weeks because they’ll lump it into the larger structural permit, which I don’t even know if I’m doing yet. I just don’t want to do all of this, because there’s a possibility that I’ll have three different permits open at the same time.” Inspectors look askance at contractors who have pulled multiple permits at the same time.

A tall, white haired man emerged from the back office. Everyone in the room craned their necks to follow his path. The tall man finally settled on the man who had been in front of us at the reception desk. He was slouching in his chair, wrinkling his Carhartt jacket and his building plans. It was apparent that he was still without permit.

“I’m sorry,” the white haired man said to him, “but since these plans were filed six months ago, the original examiner who looked at the plans can no longer examine them.”

“Listen, this job was already stalled, with hundreds of thousands of dollars tied up in the project,” the man responded. He was indignant and exasperated. “What am I supposed to do now?”

“I want to see the examiner,” the man demanded.

That would be impossible. He wouldn’t leave until he saw someone. Then he stood, already shouting into his phone, and went to the other side of the room.

Though it was probably the contractor’s fault for the delay, Grono explained to me, the inspector probably just didn’t want to get back on the case because he probably has a whole desk worth of files for new jobs.

When Grono leaned back into his seat, the white haired man came out again, and motioned for him to come back into the office. I remained in the waiting room watching the afternoon news and listening to people sending updates on their progress back to their respective offices.

After only 15 minutes, Grono came out and we walked into the main concourse of the building. He had been granted the permit for interior alterations. But what about the kitchen renovation? “His answers weren’t definitive.”

Not much had been settled. Grono had gone in asking for direction. “What would be ideal would be for the inspectors to act as advisers, not to hold my hand, but to be able to work with me through all of these different permitting needs for these jobs to create a streamlined process.” But L&I’s system is by definition inflexible. “You can’t run a business on arbitrary randomness.” Grono sighed. “I shouldn’t have to open up three different permits, with three different inspectors, or try to cut corners to get everything on the same permit.”