Diving In At The Natatorium 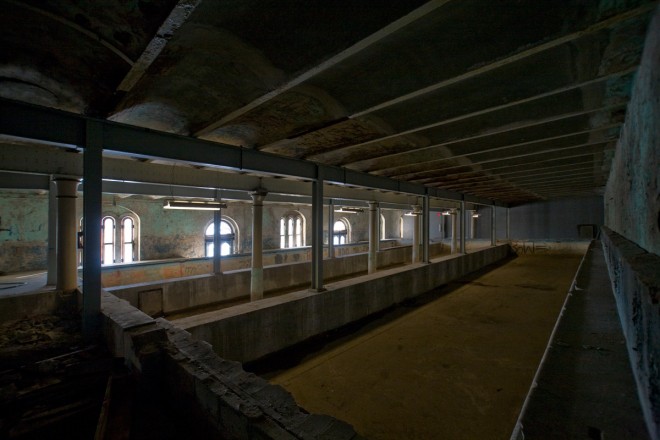 In the deepest recesses of the Fairmount Water Works, water’s time for recreation came and went fast. The Water Works, having operated from 1812 through 1909, was a first-of-its-kind municipal filtration system that not only provided Philadelphia with clean drinking water, but also a picturesque public space romanticized by the likes of Currier & Ives and Charles Dickens. After the City opened newer and more technologically advanced water facilities, it closed the Water Works and the Philadelphia Aquarium opened in 1911 in its place. The Aquarium lasted until 1962, after which time a portion of it was converted into a swimming pool, with funding coming from Philly’s royal family, the Kellys.

With three lanes, the pool was used by the Kelly family for Olympic training and later given over to the public, the first integrated pool in the City. It stayed in use until it was ravaged by Hurricane Agnes in 1972. While much of the Water Works has been restored—namely in the Interpretive Center and the Water Works restaurant—the Kelly Natatorium has itself sat vacantly. That’s where Hidden City is stepping in to activate the space.

As our ninth confirmed site for the Hidden City Festival 2013, the Kelly Natatorium will be opened to the public for the first time in over 40 years. In the space, art collective Camp Little Hope will create the Bibotorium, an interpretation of a 1920s proposal to create an educational saloon.

For more on this site and project and to contribute, visit the Festival web site HERE. For a preview of the space, click any of the photos below to launch a short photo essay.