Digging In The City’s Basement 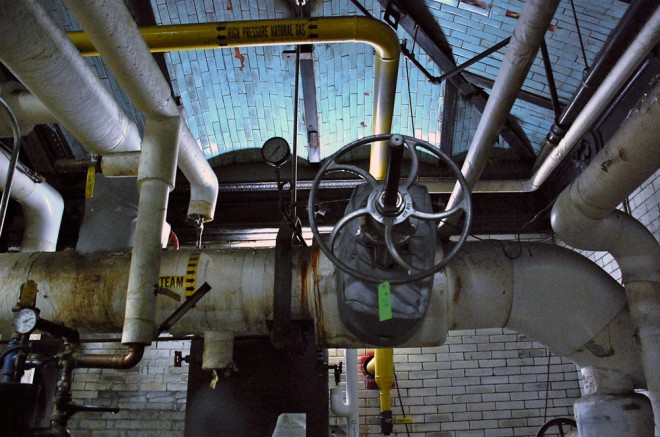 Crank it: in the basement at City Hall | Photo: Sam Robinson

This second in a series of profiles within the walls of City Hall takes us into the belly of the beast, its basement, home to a bewildering tangle of wires, pipes, and passages leading off into darkness in all directions. The detritus of over a century of city governance has found a resting place in this vast underbelly, which forms both the support for the hulking masonry above, and the roof of the crisscrossing subway lines passing beneath it. The presence of these lower lying subterranean serpents is felt in the basement, with the rumble of very close subway cars passing through every few minutes. The presence of the beast above is less palpable, but present nonetheless in that slightly miasmic feeling of decay that pervades City Hall, intensified somehow amidst the stone and brick and clay that forms its feet. 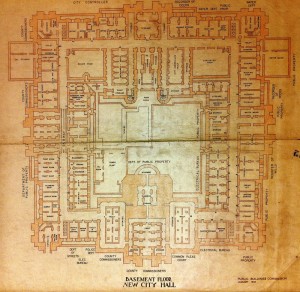 Ground was broken for City Hall on August 10, 1871. That first scoop of dirt began an excavation eventually to last over thirty-six months, and involve the removal, by hand, of some 141,500 cubic yards of dirt and stone, and the installation of 20,000 cubic yards of foundation concrete—the equivalent of 100 miles of sidewalk. For the base of the tower alone, construction workers poured a slab of concrete 100 feet square and over eight feet thick. The cost of the excavation, astonishingly low given the projected $24 million price tag of the building, was a mere $359,668.

Almost immediately upon completion of the building, new excavations to allow the Broad Street Line to pass under the foundation of the Hall began. In its original configuration, the Market-Frankford Line, the older of the two, split into two tunnels which circled City Hall to the north and south. This layout was altered in 1936, when the Market-Frankford Line was also tunneled under the Hall, somehow crossing over the orange line beneath the west-facing portico leading out onto Dilworth Plaza. The BSL’s slight jog west at this point in its route—the only deviation along its twelve mile length—was designed to avoid placing the enormous weight of the tower on the subway’s shoulders.

Like the floors above the street, the basement is a patchwork of new construction, delayed maintenance, and jury rigged jobs, the effect of years of partial budget appropriations, and making due with what’s available. The floor contains much of the mechanical plant of the building, a great deal of storage for Departments housed in the upper floors, as well as masonry, machine, electrical, and carpentry shops, in which tradesmen toil to keep the old building functional. But there are also many rooms which have no modern purpose, and which are either entirely forgotten, or used as impromptu break rooms. Few are the remnants of its time as Police Headquarters prior to the department’s move to the Roundhouse in 1963. 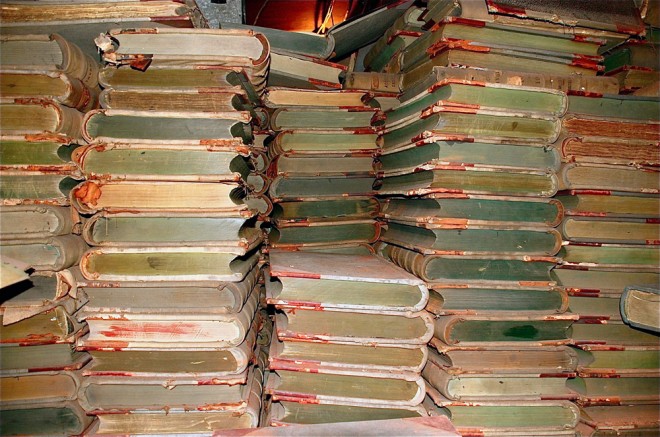 One of the odder rooms in the basement for example is a records storage room overflowing with old wills and testimonials, which were apparently left behind when the majority of City records were moved to the archives at 30th and Market. The outfitting of the room is a particularly good illustration of how the nineteenth century terror of fire shaped City Hall. In an age of gas-lanterns, fire was a constant danger and since every legal document at that time was written out by hand, a fire in a record repository could wipe out years of carefully maintained documents. Records in City Hall were kept in small sealed rooms, behind thick iron doors, and contained in metal filing cases, often with roll tops. That Philadelphia has managed to keep full property records dating back to 1683 despite numerous fires in City Hall suggests just how well designed these precautions were.

Passing through the north wall of the basement from somewhere beneath the intersection of Broad and JFK is a stone lined tunnel, roughly five feet in height, built to bring in all of the telephone, electrical, and fire alarm wirings for the entire building. What appear to be original porcelain insulators still hang on trusses which conveyed the wires through to the vaults. 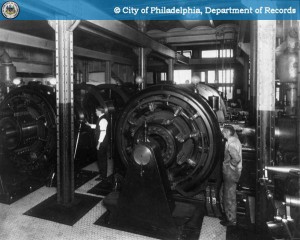 From this central point, dedicated shafts carried wires to every floor, including to what was once claimed to be the largest municipal telephone exchange in the world on the sixth floor. The first electric lights were lit in the building in 1881, but plans to wire the entire place were not drawn up until 1888, at which point five years of chiseling channels into the marble walls was required to accommodate electric wiring throughout the already completed portions of the building. Increased demand for electricity forced the City to install five 300-horsepower dynamos generating 1,000-kilowatts to keep 15,000 incandescent lamps lit in 1913. The “power plant” in which this machinery was housed now contains little but the slabs that once held the generators.

Elsewhere, machines have just been abandoned in place. A massive pump which may have originally helped power the hydraulic elevators sits in darkness, slowly rusting away. This pump room is nestled between two giant stone spiral staircases which, although also no longer in use, extend from the basement to the seventh floor and once carried prisoners to holding cells high in the building where they awaited trial.

Nearby this hulk, in one of the two original boiler rooms, newer, more efficient steam boilers have replaced the original coal fired ones. This room offers a great contrast of new and old; at a glance it seems to be the normal heating plant you would find chugging away in the substructure of any large building. But the room is one of the more ornate in the basement, with intricate wrought iron girders supporting a tiled, vaulted ceiling. This room, and its twin on the west side of the Hall are located at the bottom of open atriums, designed to isolate the boilers from the rest of the building with the same fear of fire in mind that motivated construction in the records rooms. 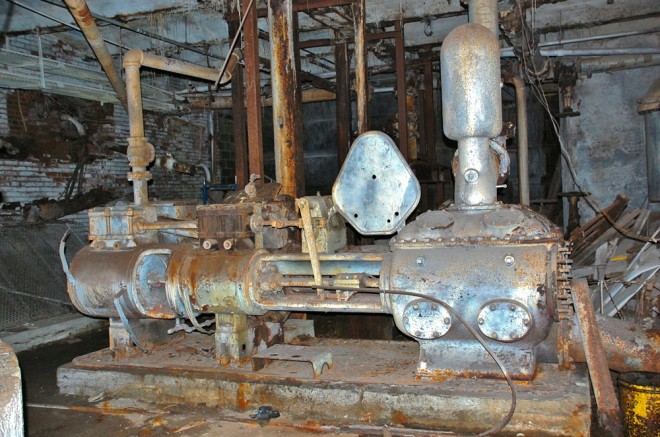 All dried up | Photo: Sam Robinson 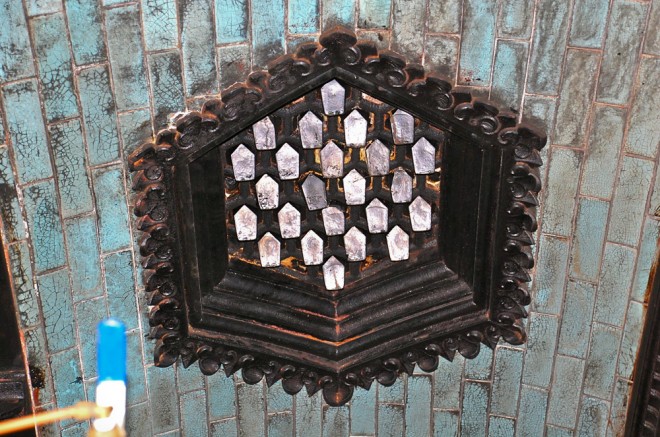 The ceiling of these rooms contain what may be the most interesting feature of the entire basement, a series of prisms set in ornate frames, installed to bring natural light into the boiler room, a sort of steampunk fiber optics. These early skylights—sometimes called “vault lights” or “deck prisms” due to their development on ships—were apparently fleetingly popular in the second half of the nineteenth century, before inexpensive electricity ushered them into irrelevancy. Sadly, the prisms were painted over at some point—it was suggested perhaps during World War Two as part of blackout procedures, and no longer light the boiler room.

Visiting the basement is intense. While upon first entry it seems in many ways similar to say, the basement of a large elementary school, crowded with cast off office furniture and excess fire extinguishers, as you wander further, the sheer number of passageways, locked doors, and slowly aging infrastructure in the four-and-a-half acre site quickly becomes bewildering. That City Hall functions as it does—that anyone can keep track of where all the layers of wires and pipes go—is incredible. Much like the beast above, it all seems to just work, imperfectly, and with plenty of room for improvement to be sure, but somehow, improbably, still keeping the lights on.

The author would like to thank Adam Agalloco of the Mayor’s Office of Sustainability for showing him around the basement, on a Friday afternoon, after five.