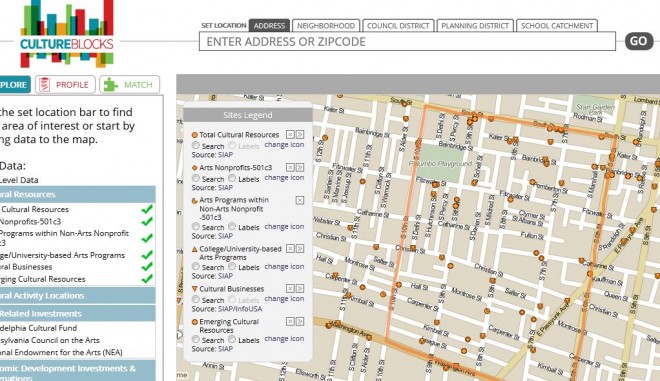 Mapping the cultural resources of Bella Vista on CultureBlocks

Officially launched today, CultureBlocks is a free mapping tool meant to help us help us understand our neighborhoods, their cultural assets, and ways we can capitalize on them.

The web tool was developed through a public/private initiative of the City of Philadelphia Office of Arts, Culture and Creative Economy, the Department of Commence, the Reinvestment Fund, and the University of Pennsylvania’s Social Impact of the Arts Project.

The website maps “cultural assets” in the Philadelphia region. Over the past three years, its creators have done surveys and spoken to stakeholders like community groups and non-profits to figure out what sort of data is important to them. As a result, the map tool combines census information about households, age, income, and ethnicity. The map also pinpoints commercial corridors in the city, community gardens, bike racks, historic buildings, among other measures of urban well-being. “It democratizes a lot of the data that has been collected by researchers,” says CultureBlocks Director Moira Baylson, who presented the project this morning.

It’s a great tool, particularly if you have an objective in mind. So if you’re trying to figure out whether or not you should open a coffeeshop in a particular neighborhood you can find out who lives there, how much they earn, and whether or not there’s a lively business district that can sustain your business. If you’re a grantwriter who wants to get a $50,000 grant to help culturally-starved areas, you can use the map as evidence to show a lack of artists, creative businesses, or even murals in a particular neighborhood. Maybe you’ve just finished the first issue of your alternative beekeeper’s ‘zine and you’re looking for places to distribute it, you can look at business corridors near community gardens. Baylson explains that CultureBlocks is a civic-minded, decision-making tool to help people “understand what’s going on in your community.”

In real life it’s been tested and used by a literary magazine, the Food Trust, and policy makers. The list of potential users extends to people in the tourism trade, researchers and urban planners. Its creators hope that as more and more people use the tool they’ll get a better understanding of what data has higher value, whether or not they need to add more information to it, and what can be done to the data to help make it more useful to users.