The Schizophrenia Of Chestnut Street 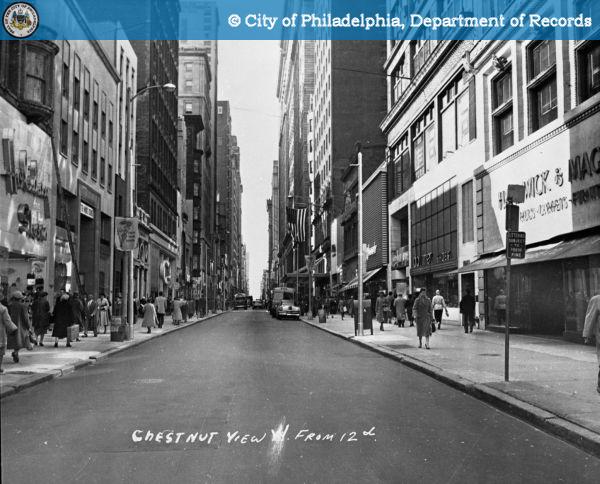 As might befit the owners of a store that specializes in modern furniture made from pieces of the past, Stefan Sklaroff and Christina Leynes see Chestnut Street as a thoroughfare on the verge of recycling itself into what it once was: the place all Philadelphia came to shop.

Many Philadelphians who’ve been around the block more than a few times no doubt remember when Chestnut, not Walnut, was the city’s premier shopping street. Lined with carriage-trade merchants ranging from Bonwit Teller and Brooks Brothers to the Blum Store and Jacob Reed’s Sons, Chestnut Street presented a bustling and diverse, yet stylish, face to the city for most of the 20th century. Sklaroff and Leynes are doing their part to put that face back on the street with their furniture store, Cella Luxuria, which occupies a 19th-century commercial building that got a Neo-Deco facelift in the 1940s in the 1200 block of Chestnut. In the photo above, it’s the narrowish building third from the left. This is what it looks like now: 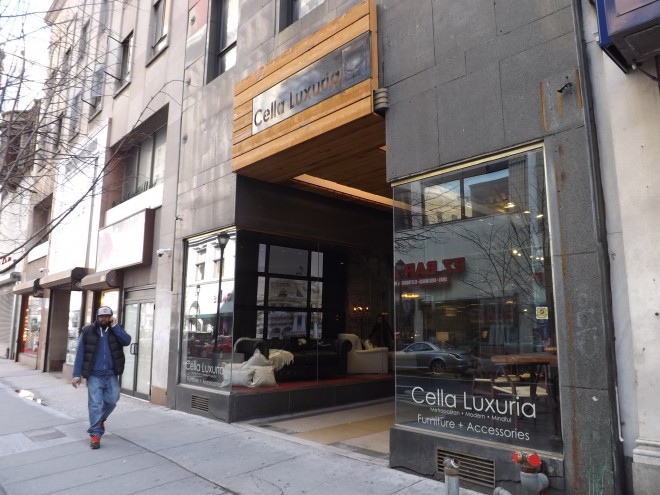 Cella Luxuria, a high-end furniture store that has restored one of the storefronts in the 1200 block to its Moderne glory. Photo: Sandy Smith.

With apartments above and retail below, the structure represents a reworking of Chestnut in its heyday, when office workers filled the upper floors of many buildings. The residents of those apartments are in turn driving a slow and awkward but steady revival of the street’s fortunes, coexisting with the stores that moved in to fill the vacuum left when Chestnut Street lost its status as a prime retail address in the years after the opening of the Chestnut Street Transitway in 1976.

That project, the mis-implementation of an idea by Edmund Bacon, did the opposite of what its builders intended. Instead of becoming a pleasant promenade with electric tramcars plying its middle, it became a thruway for hundreds of SEPTA buses emitting noise and fumes—a pedestrian repellent if ever there was one. Save for lunchtime, the street became a place people on foot avoided, and soon the stores followed the shoppers either into oblivion or onto Walnut Street. Not even the nascent Center City District’s “Make It A Night” campaign of the 1990s, which helped spark the revolution that turned Center City into a locus of all-hours activity, was able to halt Chestnut’s continued slide.

Since then, two key developments have led to a reversal of fortune of sorts for the street. The first was the return of mixed traffic to the Transitway in the early 2000s, though in wink-and-a-nod form: one lane of the street remains restricted to buses because the city would have had to repay the Federal government funds advanced for its original conversion if it were not. The second was the general residential boom that affected the neighborhoods around it, which brought more—and more affluent—residents to the vicinity. But in both cases, the changes are not large enough to completely turn the street around. Instead, its revival has been erratic and episodic, with some blocks—such as the one just west of Liberty Place, which has revived with a mix of upscale retailers and off-price havens—returned to good health while others struggle with a form of schizophrenia. The 1200 block, shown in the 1959 photo above, is one such example.

Cella Luxuria’s across-the-street neighbor, EZ Bargain, is an example of the low-end retail that still defines much of Chestnut east of Broad. Photo: Sandy Smith.

Sklaroff and Leynes chose to open Cella Luxuria where they did because they see the street’s potential. “When I walked in and saw the scale of this building, I said the neighborhood was changing enough that it was worth getting in,” Sklaroff said. “The Beneficial Bank building [at the southwest corner of 12th and Chestnut] has been sold, the methadone clinic [that had been across Chestnut from the bank] is high-end apartments, and the White Building [across 12th from the bank] is now condos.” 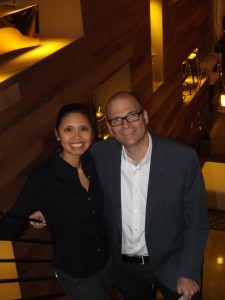 Cella Luxuria owners Stefan Sklaroff and Christina Leynes are two of a growing number of entrepreneurs who see untapped potential on Chestnut Street.

This, he said, has created a demand for a better grade of retail than has dominated eastern Chestnut of late. As he sees it, Chestnut could once again become a must-visit retail destination for residents and visitors alike. “What we’re finding from the reaction to the store is a hunger for change here, specifically from the people in the neighborhood and specifically for Chestnut Street.

“This street should be a destination not just for the neighborhood but for the tourists, the suburbanites and the visitors. It shouldn’t cater to just one demographic, but to everyone.”

To Sklaroff, that means a mix of attractive retail and entertainment options in all ranges. Some of the non-retail businesses that have opened on East Chestnut, from Milkboy at 11th to Brü in the 1300 block, are beginning to provide the latter. Attractive, well-run affordable retail—stores like Marshalls on adjacent Market Street, which Sklaroff jokingly referred to as “the high-end store” on that street—should also be part of the mix.

One thing working in the street’s favor is the availability of large floorplates at affordable rents, Sklaroff said. This makes it easy for local business owners to find attractive space they can fit to their needs—business owners like himself and his wife, who were attracted to the Chestnut Street property’s 19th-century bones and space hiding behind its Moderne facade. 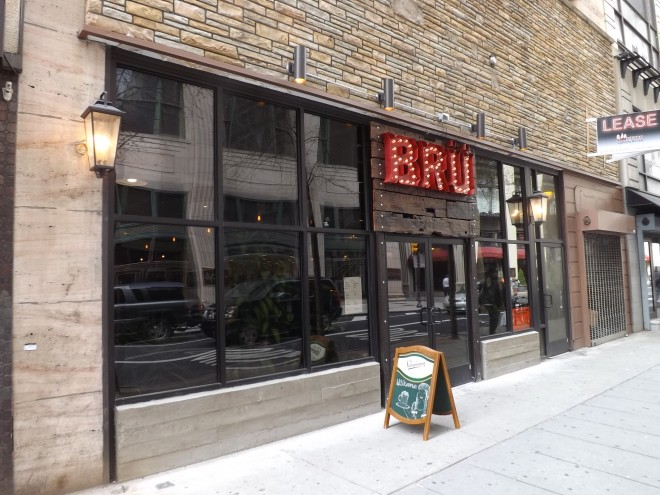 New restaurants and clubs like Brü add a new element to the Chestnut East mix and point the way to a round-the-clock future for the street. Photo: Sandy Smith.

But there remain some obstacles on the path to this vision of a renewed Chestnut Street. One is the fact that Center City remains a retail Mecca for the city as a whole, and the city as a whole is not that rich. To compound the challenge, institutions such as Thomas Jefferson University have ensured some blocks, the 1000 block in particular, may never revive by converting space meant for retail, like the street floor of the Gibbon (née New Hospital) Building, to institutional use.

The question then becomes: Can Chestnut Street evolve into the sort of active all-hours street Walnut has become, only with something for everyone who uses it? Can upscale and downscale coexist peacefully and harmoniously? We haven’t had a chance to see whether the recently released draft of the Philadelphia City Planning Commission’s Central District Plan addresses these questions, either as they pertain to Chestnut Street or to Center City retail in general, at all. But whether it does or it doesn’t, they are questions that need to be placed on our development agenda, for the good of Chestnut Street and of the city as a whole.