At The Academy, The Birth Of Wire Transmission Of Music 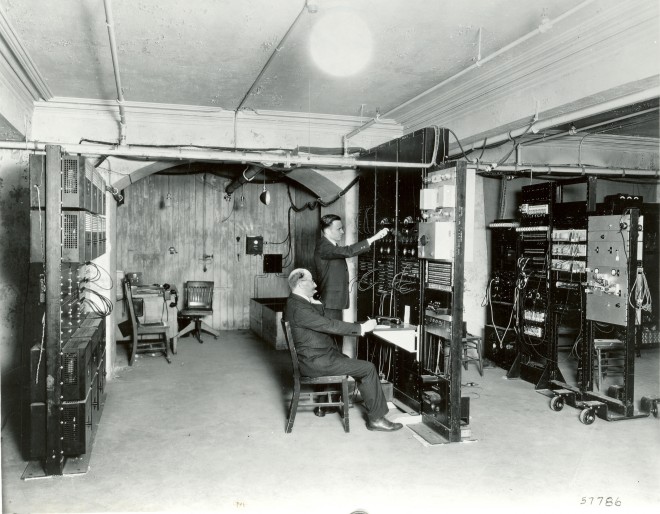 Thursday night, April 27, 1933–eighty years ago Saturday–the Philadelphia Orchestra, in collaboration with Bell Telephone Laboratories, presented a concert from the Academy of Music that was transmitted by telephone wire to a live audience in Constitution Hall in Washington, DC. Associate Conductor Alexander Smallens led the Orchestra in Philadelphia while conductor Leopold Stokowski was in Constitution Hall, “at the controls,” manipulating the sound electronically for the Washington audience. Nothing like this had ever been done before and the concert was recognized at the time as a landmark technological event.

Experimentation and innovation were the hallmarks of Leopold Stokowski’s twenty-nine year tenure with the Philadelphia Orchestra. From 1912 to 1941 the legendary conductor built the Orchestra into one of the world’s finest musical ensembles while also premiering numerous new works, experimenting with emerging recording and broadcasting techniques, and collaborating with some of the world’s greatest artists on groundbreaking developments in film, opera, and ballet. In 1925 Stokowski and the Philadelphia Orchestra made the first orchestral recordings using the new electrical process and in 1929 they gave a series of national radio broadcasts that were the first commercially-sponsored radio broadcasts of a symphony orchestra in US history. The following year they began a ten-year period of experimentation on sound reproduction with Bell Telephone Laboratories (“Bell Labs”), the research arm of the American Telephone & Telegraph Company. Among other innovations, these experiments resulted in the first stereo recordings of orchestral music, which were made in the Academy of Music in 1931-32. 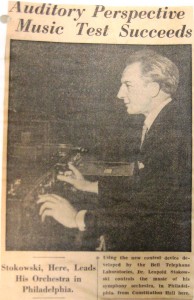 By early 1933, Stokowski and the Bell Labs engineers were ready to demonstrate a new method of transmitting orchestral music by wire. On April 12, 1933 they held a preview event for 300 invited guests. The Philadelphia Orchestra played in the Academy of Music foyer to an audience in the concert hall listening to loudspeakers on the stage. While Alexander Smallens conducted the Orchestra, Bell Labs engineers worked equipment in the basement of the Academy that transmitted the sound in stereo by wire to a receiver manipulated by Stokowski. Dr. Harvey Fletcher, director of acoustic research at Bell Labs, gave explanatory remarks to the audience about the new technology. The concert was well received and on April 27, 1933, under the auspices of the National Academy of Sciences, they staged the high-profile Philadelphia-Washington remote transmission. Some 4,500 were in attendance in Washington, including many notable figures in the worlds of music and science.

The April 27th concert was considered a great success, both artistically and technologically, and received widespread favorable press coverage. George Squier, a pioneer in aeronautics and radio–and the inventor of “Muzak”–sent a telegram to AT&T president Walter Gifford on April 28th stating that “Stokowski’s performance last evening…in Constitution Hall marked a new era in the history of art.” The Philadelphia Inquirer wrote, “For those alive and alert to the significance of the episode, it took rank as an epochal event in the history of musical performances.” Three days later, the concert was repeated but just in Philadelphia, with a full audience in the Academy of Music concert hall listening to the Orchestra performing from the foyer. 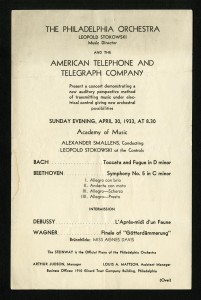 Leopold Stokowski and the Philadelphia Orchestra continued to work with Bell Labs throughout the 1930s on experiments in electrical sound reproduction. By the end of the decade they were working on a new technology for recording music in stereo onto film. Around the same time Stokowski and the Orchestra began working with Walt Disney on another groundbreaking venture, the animated musical film Fantasia. Disney wanted to use the Bell Labs stereophonic film recording method for Fantasia, but Bell Labs considered their recordings with Stokowski and the Philadelphia Orchestra to be experimental and did not want to get involved in a commercial enterprise. They declined Disney’s request and Fantasia was subsequently recorded in “Fantasound,” a system developed by Disney engineers and RCA.

Interestingly, the Stokowski-Philadelphia Orchestra recording sessions for Fantasia took place in early 1939 in the Academy of Music, around the same time the Bell Labs experimental recordings were also going on in the Academy. Thus, two different series of innovative recording sessions with two different companies took place in the same time period, in the same place, with the same conductor and orchestra. It was a particularly fertile period in the history of music technology, one in which one of Philadelphia’s most venerable buildings and its most celebrated musicians and musical ensembles all played a significant role.