Amidst A Redeveloping Waterfront, An 1830s Row Lives On 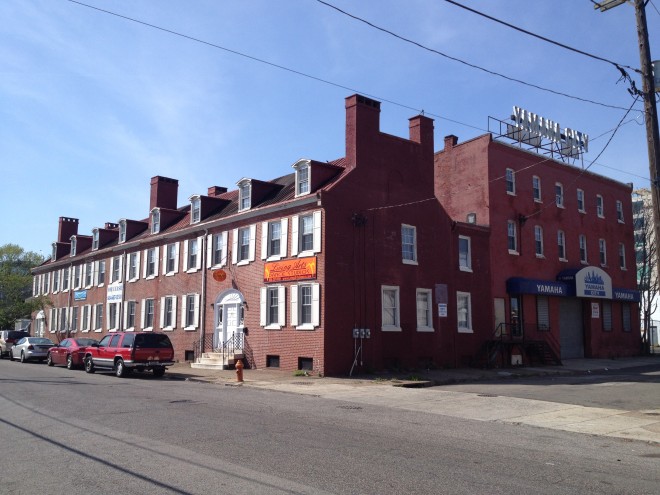 East of I-95, in Northern Liberties’ nether regions, stands this perplexing ancient row of houses. Smack dab in the middle of a No Man’s Land of surface parking lots and buildings whose use vary from gas station to dentist office to Philly’s most renowned strip club, this combined structure made up of early-19th Century rowhouses and a late-19th Century Wagon House looks decidedly out of place.

Though others laid claim to this area in the ancient past, it was best known as part of the property of the Coats Family, a clan of brickmakers who were one of the earliest families in Philadelphia, arriving in 1682. Legend has it that they made their first home in a cave located at what is now Front and Green Streets. William Coats, Sr., the head of the family, came to Philadelphia in 1705 and acquired this land in a will from Daniel Pegg. The block this row sits on, now the 0001 unit block of Fairmount Avenue, was first dedicated on November 28th, 1771 as Coats’s Landing (deeded to Thomas Coats of that Coats Clan), a steep thoroughfare forty feet wide, that allowed access to Coates Street (now Fairmount Ave) from the Delaware River, crossing Oak Street (now North Beach Street) and Fleet Street (gone). Note: Coates, the street, was a misspelling of the Coats family name. Coincidentally, nearby Brown Street is named for Coats’ son-in-law, Peter Browne. 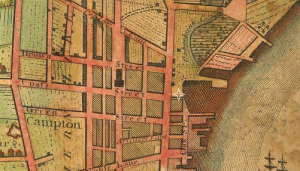 The area in 1802. The white star shows the location of the current row. | Source: Charles P. Varle Map

Early Philaphile John Fanning Watson noted in his famous Annals of Philadelphia that until 1806, a shallow marshy bay covered the entire area around the opening of Cohonksink Creek Canal (now Canal Street) between Point Pleasant (now the approximate location of SugarHouse) and Wharder’s Wharf (East of Front and Green). This bay would often enlarge after a stiff rain, reaching all the way to Front and Coates Streets, west of this surviving row. The bay was strengthened during the British occupation of Philadelphia in 1777/78, when they used it as a natural barrier between the city and their primary base of operations near Point Pleasant. Watson even speaks of the row, writing, “All the ten or twelve houses north of Coates street on the east side [of Front] were built on made ground and their little yards were supported with wharf logs and bush willows as trees.”

Though it’s unclear exactly when this row was built, it is reasonable to assume that the houses were constructed some time around 1830, when Coats’s Landing was raised up and widened to 50 feet to become part of Coates Street. For the early 19th Century residents of these houses: shoemakers, tanners, shipbuilders, corders, and trunkmakers, this wasn’t the most fun place to live. Every Spring, even a small freshet would bring a light flood from either the Delaware, the Cohonksink Canal, or both. Every few decades, there would be a flood large enough to render the neighborhood useless for up to a week.

In the second half of the 19th Century, the area began its long climb into a bustling industrial riverfront. Surrounding blocks of houses were mowed down and made into lumber yards as early as 1850. Around 1870, the A. Wilt and Son Sash, Door, and Shutter factory planted itself north of the old row of houses, eliminating Court Alley, a group of interstitial streets. Shortly thereafter, a private mixed-use Wagon House/Residence/Stable was built immediately north of the old row at 702 North Beach Street. Later part of the A. Wilts complex, this would become part of the current structure the old row of houses is today.

Coates Street was re-named Fairmount Avenue in 1873. Six years later, 81 and 83 Fairmount, the two houses in the row at the corner of Fairmount and Beach Streets, were taken over by Hicksite Quakers. The houses were combined into one unit and an addition was built on the rear. It became the Friends Neighborhood Beach Street Mission, a settlement house and community center that primarily served local children, who were, at this point, mostly poor immigrants. The mission continued at this location until 1899, when they moved to 151 Fairmount and re-named themselves the Friends Neighborhood Guild. The organization still exists today, located at 701 North 8th Street. 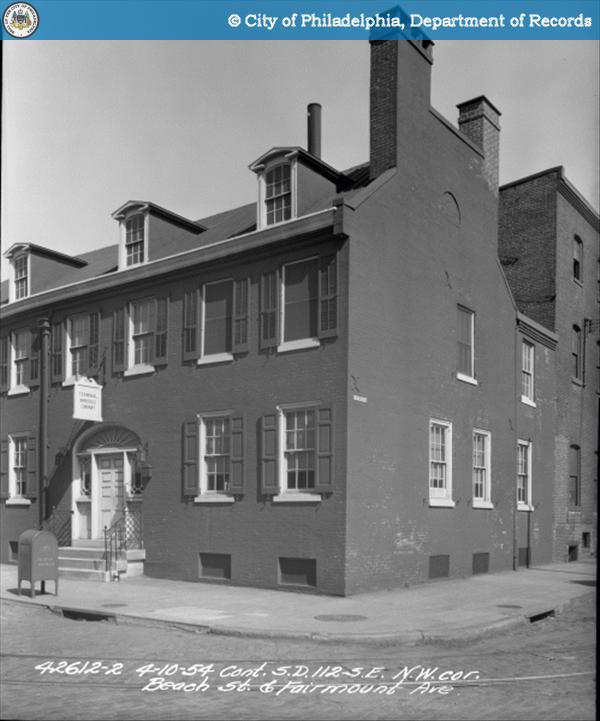 By the early 20th Century, the entire area surrounding the row of houses had become an industrial wasteland. It’s likely that the houses went unused during this time. In the 1930s, the Saint Paul, Minnesota-based Terminal Warehouse Corporation took ownership of the row of houses and the old Wagon House to the north. They combined the structures and extended the old Wagon House all the way to Front Street, creating the 19,894 Square Foot property we find at this location today. This company had an interesting business model, specializing in the purchase of under-utilized properties in industrial areas in cities all across the country. They leased the combined super-structure to various companies over the next three decades, the most interesting of these being Blevin’s Popcorn Company.

Tax records show that the current owner of the building, known only as Mount Corp, purchased it in 1965. They continued to lease the space to numerous companies: a car dealership in the early 70s, an industrial realty management firm in the late 70s, the American Freight Corporation in the 80s, a caterer in the 90s. Since 2000, a motorcycle dealer called Yahama City has made their home in the old Wagon House section of the property. Recently, the Living Dance Studio has moved into the old row, along with a real estate agency.

Given how distant the Northern Liberties east of I-95 feels relative to its bustling western core, the fact that this little group of rowhouses has survived to this day is nothing short of a miracle. Though it seems unlikely now, perhaps one day this old row could be re-engineered into individual residences. As the city’s waterfront continues is long, slow, redevelopment from an industrial stronghold to a mixed-use wonderland, anything could be possible.