All Smiles On Woodland Avenue 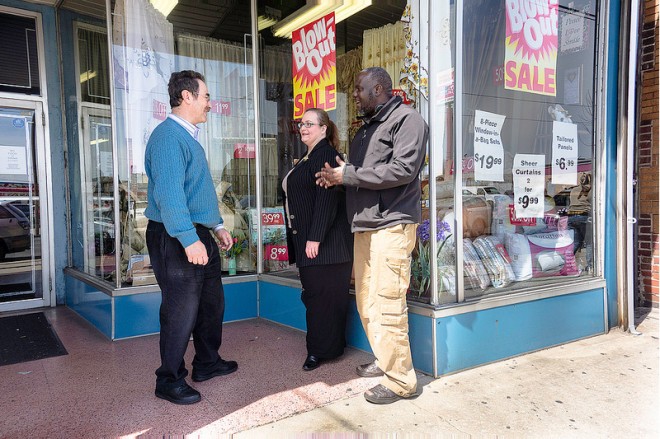 Editor’s Note: Well served by SEPTA’s trolley network, Woodland Avenue is one of the largest and established commercial corridors in Philadelphia, with over 175 shops, restaurants, hair salons, professional offices, and an even a wedding chapel. Contributor Theresa Stigale grew up just a few blocks from Woodland Avenue, and fondly remembers the Avenue of 1960s and 70s, when going up the Avenue was an exciting and fun family outing. As a young teenager, she and her friends practically lived there: buying their first 45s and albums at Jolly’s Records, t-shirts at Jay’s Army Navy, and stationary supplies at Philmor’s Cigar Shop, where the air thick was with fresh tobacco. Every Saturday was movie day at the Benn, and then maybe at stop for a banana split at the 5 & 10, where you popped a balloon and paid the price inside, sometimes lucking out at the cost of a mere penny. Theresa’s parents even met on the Avenue, working together as teenagers at Jupiter’s 5 & 10. We asked Theresa to visit her old neighborhood and report back on the changes and viability and of this historic strip. Here’s what she found.

Anchored by Cobbs Creek Parkway to the west and the University of the Sciences to the east at 43rd & Woodland, the commercial core is typically considered to run from 58th to 68th Street, the location of the historic St. James Church. Long-time residents refer to the core as simply as “The Ave”–over 175 business are located on this three mile strip, with merchants and shoppers from literally all over the world.

In its 20th century heyday, a plethora of goods and services were available from independent merchants. Turtles and goldfish were sold in the basement of Murphy’s, yarn for ponchos at Cliveden’s, fresh rotisserie chicken at Centrella’s, greeting cards and earrings at Bob White Gift Shop and and groovy maxi-length dresses at Swanky’s. Today’s Avenue offers a mix of both independent, chain stores and franchise businesses. Multiple waves of immigrants have populated the storefronts over the past few decades, and none more prominently that the most recent influx of merchants from Liberia. 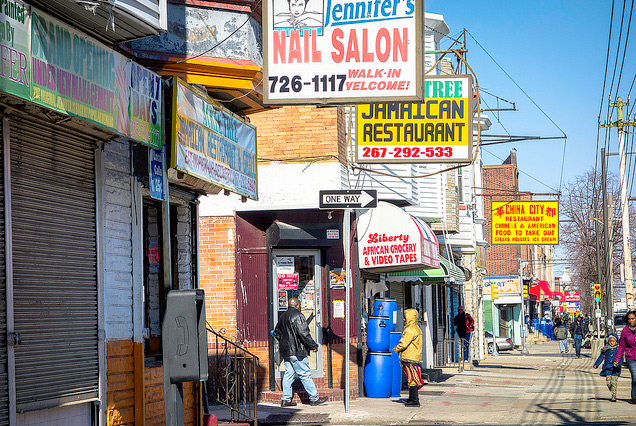 The Southwest Community Development Corporation was originally incorporated in 1987 to help area residents with home utility needs, but has since then expanded to include an array of services including community and economic development, through the Woodland Avenue Revitalization Project. Page Huey, project manager and Elhadji Ndiaye, project corridor liaison offer economic support and assistance to merchants to build and grow their business.

The most tangible evidence of their efforts is the low vacancy rate among Avenue storefronts. Colorful banners hang from street lamps from 58th to Cobbs Creek, along with national flags representing the diverse cultures of southwest Philadelphia, extraordinary evidence of the transformation of a place that once bristled with racial tension. 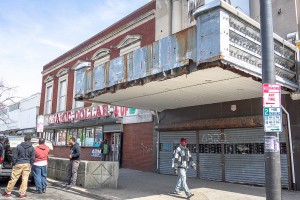 The historic Benn Theater, opened in 1923 and closed since 1975 | Photo: Theresa Stigale

The CDC offers micro loans and workshops to new businesses and that encourage the growth of independent and unique shops, through partnerships with support organizations Finanta and Entrepreneur Works. The Storefront Improvement Program helps new businesses with facade repairs that benefit the entire commercial corridor. Improvements are designed to preserve the existing architecture and owners can receive up to 50 percent of the cost of improvement, up to a maximum of $8,000 for a single store, or $12,000 for a double storefront or corner. In addition to the merchant services, Huey and Ndiaye also work hard behind the scenes to attract new customers and deal with the persistent perception that the Avenue is dangerous. On a first name basis with many merchants, they are on the Avenue often and are well known for attracting and helping a unique collection of businesses.

What follows is a short tour of Woodland Avenue businesses and conversations with business owners, so many of whom were excited to share their stories. 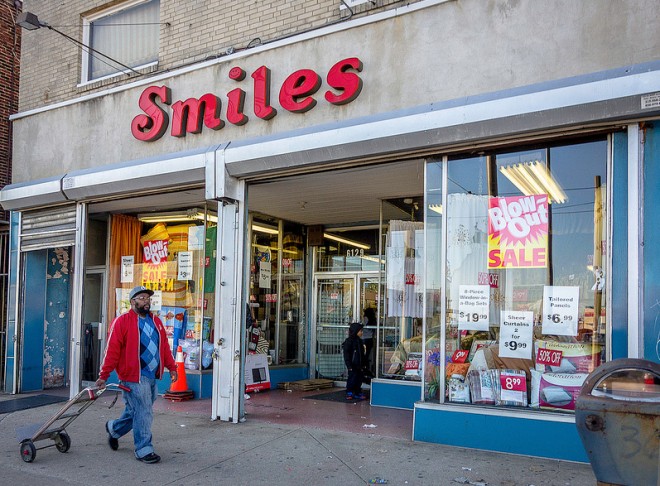 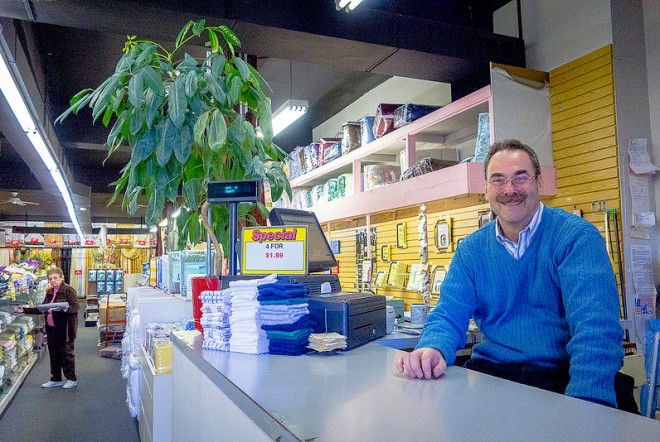 Smiles Linens is one of the oldest shops still operating on the Avenue, and one of only two or three specialty linen retail shops in the city. Still providing lay-away service, customers can purchase curtains, bedrooms linens, and other goods with no money down and no time limit.

As a past president of the now defunct Woodland Business Association, owner Bruce Zeiger still serves in that role as the de facto “Mayor of the Avenue,” the go-to guy for other shop owners with various problems to solve. His longevity on the Avenue earns him the respect of other merchants who seek advice and his friendly demeanor goes a long way to help diffuse neighborhood tensions.

Bruce recalls a time, in the 1970s, when Woodland Avenue served as a one-stop shopping center for the entire neighborhood. Almost every store was a specialty store, with personalized service. Everything that a family needed could be bought within walking distance up on the Avenue, from shoes, jeans, and fine hats to the Philadelphia Bulletin at the newsstand. Bruce reels off the names of long-gone store and restaurants: John’s Bargain Store, Thomas’s Candy, Swanky’s, Wellworths, Theodore’s Restaurant, Linton’s, and Mr. Hot Dog. He sees the Avenue today as a busy and stable thoroughfare, having gone through some rough times when the older stores started leaving and high turnover and vacancies ensued. He maintains confidence in the Avenue and hope that the Woodland Avenue Business Association will return in full force once again. 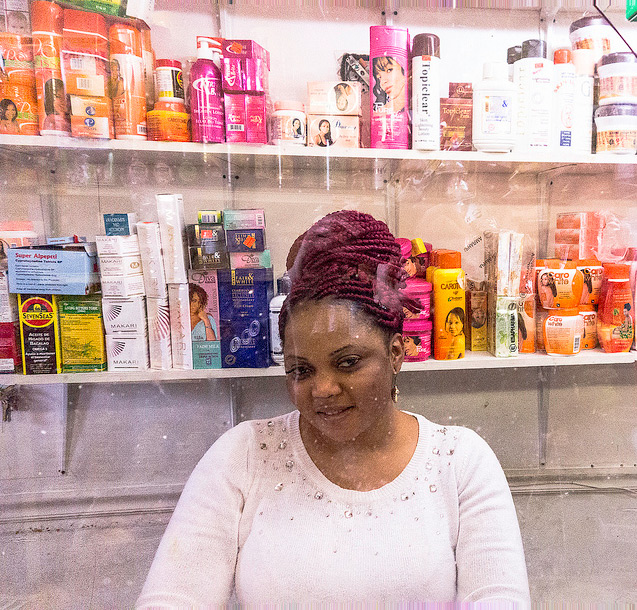 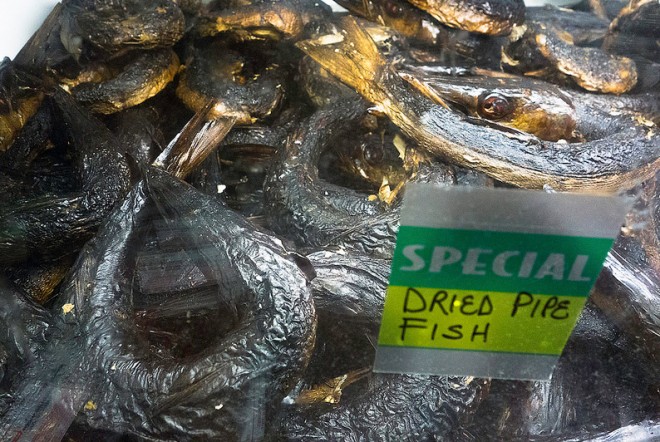 With a her brother already settled in Texas, Marie Brown and her husband came to the US from Liberia in 2003. Just two years ago they opened the Liberian Merry-Go-Round Grocery Market, near the corner of 62nd and Woodland, importing Liberian foods directly from her native country as well as the Caribbean. Every inch of the shop is packed with spices, dried fish, frozen meats, poultry, and stalks of sugar cane. A wide variety of beauty cremes and lotions from Africa, phone cards and African movies are also for sale. Near the register, Brown sells rock-like red and yellow coco nuts, to chew on for energy, three for a dollar. With several SEPTA bus routes and the trolley literally outside her door, Marie considers Woodland Avenue a good business area because it is always busy. 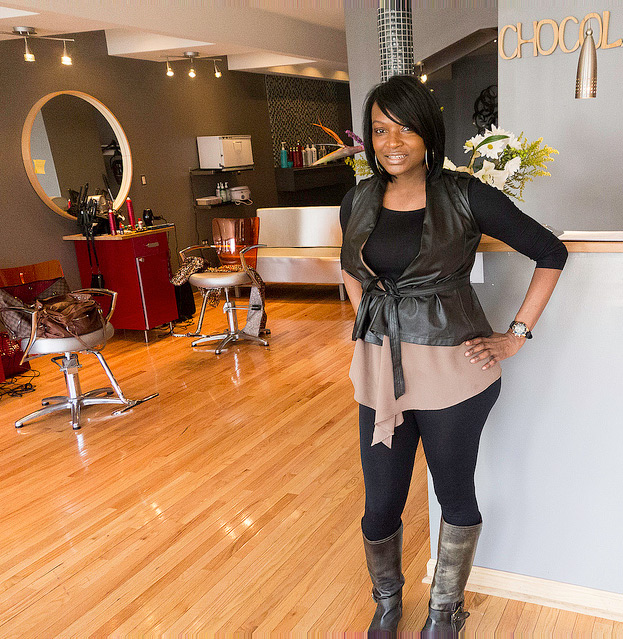 Latasha Sampson moved her salon from 48th & Woodland, where she operated for nine years, down into the core of Woodland Avenue near 62nd Street, opening her new shop one year ago. The contemporary double storefront offers not only hair and nail services, but massage therapy and a small high fashion boutique. With seven stylists, the shop is busy. Latasha said that she aimed for the look of a downtown salon to serve the neighborhood clientele, many of whom are in the $50-$75,000 income bracket. “It’s important to make the clientele feel that they are coming in to a special place. They deserve the same quality of service that they would get in a downtown salon. I wanted to offer that higher level of service right here so that they can receive the best pampering and service in their own neighborhood.” 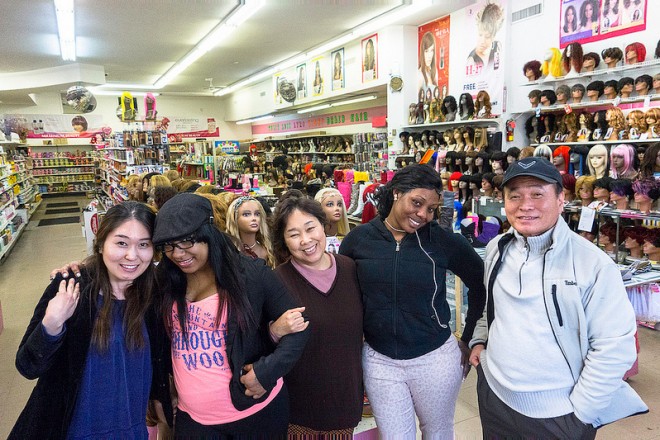 Enter the large, high-ceiling store, which used to be Swanky’s, and you will be warmly greeted by the staff, who look to be best friends with each other. Mr. and Mrs. Cho have operated their discount store for 15 years. They serve both the local neighborhood clientele and also those in the beauty trade, who come in to stock their own salons and stores. Overall, they are very glad that they chose Woodland Avenue, because the area is busy and they feel very safe with a strong police presence. With goods ranging from sparkling and bold costume jewelry, shoes, beauty supplies to seasonal goods, the emphasis here is all on hair. The wig and hair extension inventory is deep–one of the largest in the city. 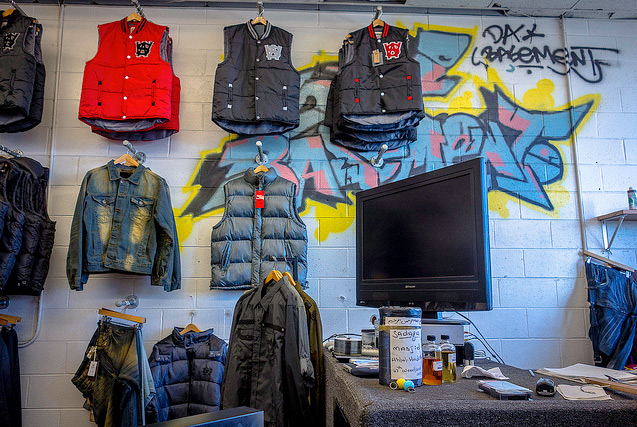 Shahid Armstead, originally from West Philly, has owned his own shop for about eight years. He primarily sells men’s clothing, but his selection has changed in response to the economic crisis.

When he opened, Armstead stocked a more expensive line of clothing than the jeans, vests, shirts, and hoodies he sells now. Confident that he has now found the right mix of goods, his regular customers, who had stopped coming in frequently, are back. 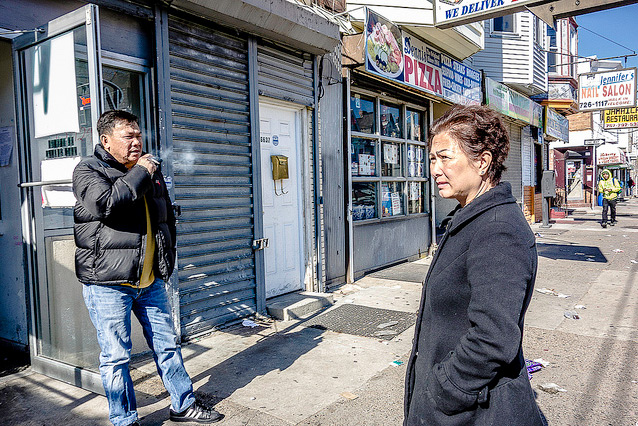 The owners standing outside of Woodland Livestock | Photo: Theresa Stigale 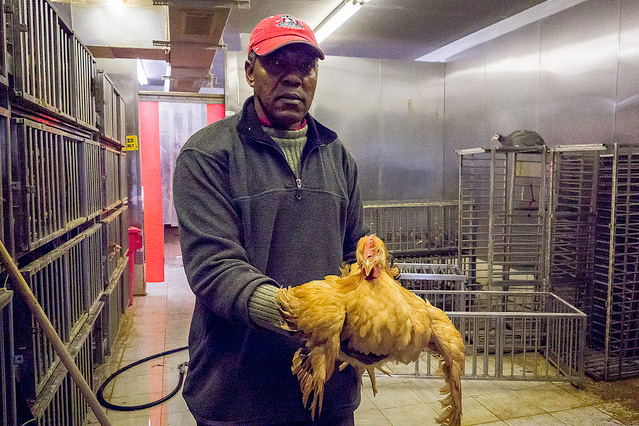 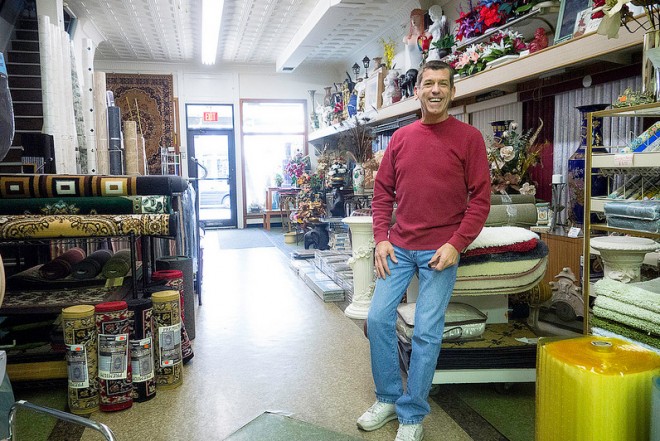 Tom Foglio started selling window blinds and floor tiles at Goldberg’s in 1969, and boasts that it is the oldest shop on The Ave, opening in 1934. Twenty-two years ago, he was almost out of a job when the former owner retired, so he decided to buy both the business and the building. Today, he’s glad he did. Still, he talks about the lack of attention from City Hall. “This neighborhood is the step-child of the city. The city pours so much money into other neighborhoods and we are here making things happen on own own.”

Yet, Foglio is grateful that he stayed amidst all of the changes and sees the commerce coming back even stronger in the future. Noticing University students with backpacks every morning waiting for the #11 trolley, Tom knows that the ever-reaching arm of of University City will eventually catch up to this commercial corridor. “We are full. Almost every storefront is occupied, there are no board-ups like in other neighborhood commercial streets,” he says.

“Store rents start around $1,500 per month and go up from there. Those are pretty impressive numbers with such low vacancy, it shows you that the neighborhood needs us, that they look to us to stock their everyday goods. They don’t want to or maybe can’t leave the neighborhood and drive down to Wal-Mart to replace a broken mini-blind.”

Foglio’s shop also sells home goods. “Here’s a great deal on this piece of framed art for only $40,” he shows a customer. “The frame is worth more that that.” The young male customer concurs: he just furnished his new apartment with many items from Goldberg’s.

“All good deals here and good service too, that’s why I keep coming back,” says the customer.

“Personal service is what it’s all about,” says Foglio, “and that’s why our customers keep coming back to us. Where else but Southwest Philly can you walk to three different trolley lines into town, and have the variety of stores that we have up here?”

Just then, a young boy, about 10 year old, comes in. He asks to use Foglio’s phone. “Locked-out again?”