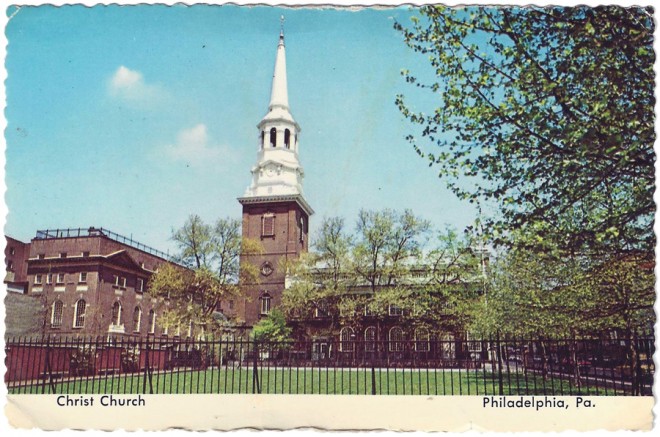 A colonial historic site is seeking a new home for its iconic bell. Christ Church, the oldest Anglican church in the country, has reacquired its original, circa-1702 bell, and it wants to share. The 25″ tall, 350 pound Great Bell was cast at the same Whitechapel Foundry in London that would cast the Liberty Bell half a century later. And unlike that more famous bell, this one ain’t broke.

The Great Bell predates even Christ Church’s famous steeple, the feature that made it the tallest building in America for some time. It hung first from a tree, then in a belfry of the wooden building that preceded the historic building we recognize as Christ Church now.

When that building and its steeple were completed in 1754, the church purchased new bells and gave the Great Bell over to St. Peter’s Church, where it stayed until 1842, when it was then given to Christ Church Hospital, a home for indigent women. In 1961, that hospital became Kearsley Rehab & Nursing Center—named for John Kearsley, a physician and minister at Christ Church—and they moved to new facilities in Wynnefield. In 2011, Kearsley was purchased by a private retirement company who still operates the facility as Kearsley, but they divested the organization of its historic records and artifacts, including the Great Bell. And now, it’s back home at Christ Church.

Last week, they put out an RFQ for firms to compete for a new display facility on the grounds of the historic church. Up to four design proposals will be selected for review in August, with the winning design to be chosen on October 17th. The Great Bell project is then to be completed and dedicated July 4, 2014. For more information and to view the full RFQ, go HERE.