A Moment For Atonement 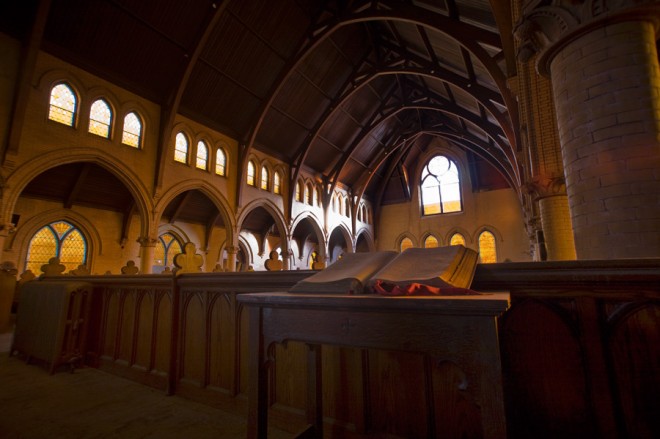 As I walked through St. Peter’s Church of Christ yesterday, the dying light of the afternoon cast an incredible golden glow through the stained glass windows—the ones that still remained.

Built as the Church of the Atonement in 1900 with a design from Furness, Evans & Co., this West Philadelphia house of worship appears to be short on time. Neighbors have been concerned about its condition since well before one of its celtic crosses crashed onto the 47th Street sidewalk, luckily hurting no one. The exterior has crumbling rooflines, busted out windows, and trees growing through walls. But it’s the interior where an L&I repair-or-demolish notice seems to make the most sense.

At the rear of the nave, the main window has retained its gothic outline, but a third of its glass has crashed over the holy water font below, and its mullion was hanging on by only the steel that used to hold the glass in place. Holes in the floor looked like the result of someone dropping bowling balls from the vaulted ceiling until they burst through. At the front of the sanctuary, the large Bible used for scripture readings was still opened to the Book of Isaiah. The hymn board still showed the last service’s selections, hymns 166, 2, and 346. The pastor’s office had additional hymnals, a bible, inspirational posters depicting holy scenes, and receipt books on church letterhead—next to a box of emptied tithing envelopes. And over all of it lie a half-inch thick layer of dust. It looks like the congregation left during an earthquake a decade ago and never returned.

You hate to see yet another gorgeous neighborhood structure like this lay to waste, let alone another with a Furness pedigree. The cracks in the wall and bell tower, however, pit a growing danger to the community against an incredibly expensive race to preserve a sacred landmark that’s across the street from one (Crusaders for Christ Church) and two blocks from another (St. Francis de Sales).

All photos are from Wednesday, April 3rd.