A Cultured Pearl For Chinatown North 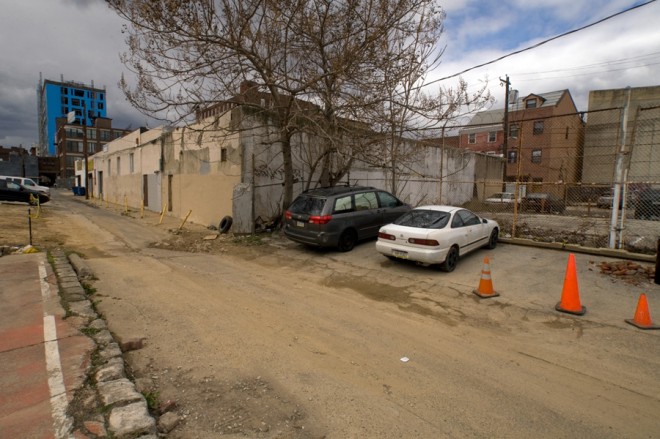 Very much the “before” picture: Pearl Street between 10th & 11th | Photo: Bradley Maule

With two distinctive projects in the planning phase, a nondescript alley might well become the cultural nexus of Chinatown North. On Pearl Street, a narrow B-street spanning 10th Street to Broad Street just north of Vine, the Asian Arts Initiative (AAI) sees a new public space with outdoor art; at its eastern end, the Philadelphia Chinatown Development Corporation (PCDC) has its anchor in a 23-story mixed-use building with a working title of Eastern Tower Community Center.

Chinatown North is among the identities of a neighborhood also identified as Callowhill, Loft District, and more recently, the Eraserhood. For a community that’s been bureaucratically assailed by the Vine Street Expressway, the Gallery, the Convention Center, and a would-be Phillies ballpark, Chinatown, in spite of a strong sense of community, has repeatedly gotten the short end of the city’s progress. And still, with a resilient base and steady immigration, it’s quietly expanded northward. A redefined Pearl Street and a sleek new tower would lend some weight toward that identity.

The Asian Arts Initiative is familiar with the challenges Chinatown has had to deal with. The community driven art center, which engages people to explore the Asian American experience and social context, was in 2007 displaced by the expansion of the Pennsylvania Convention Center. Now at 1219 Vine Street—on the north side of the Expressway—it has a firsthand perspective and valuable stake in the neighborhood’s growth. Out its own back door lies Pearl Street, an alley lined by parking lots, loading doors, dumpsters, and the occasional discarded mattress. With its own initiative to turn that around into something desirable, AAI won a $250,000 grant from the Pew Center for Arts & Heritage.

“What we have now is not just an opportunity to grow, but to serve the needs of diversity in the neighborhood,” said Gayle Isa, AAI’s executive director. To do that, AAI has hired Oakland’s Walter Hood, whose work includes the landscaping of the de Young Museum in San Francisco and the Greenprint, a vision for Pittsburgh’s Hill District to embrace its urban forestry, a project which grew out of the Penguins’ new hockey arena development in 2008. 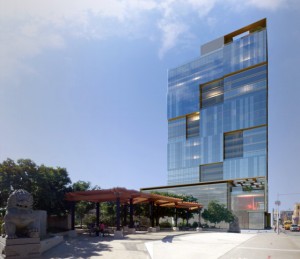 “There isn’t a model for this project,” Hood said during a fact finding visit last month. “[Pearl Street] has a beautiful presence, but we have to balance romance with the realization that there are odd and disparate lots.” He also added, of the Eastern Tower, “this building’s presence establishes the place of Pearl Street.”

At 23 stories and 262′, it would easily be the tallest building in the neighborhood, a visible signature for Chinatown. PCDC, whose mission is to preserve the live-work mixed-use integrity of Chinatown, aims to exemplify that mission in the tower half a block from Holy Redeemer, the Chinese Catholic Church whose preservation PCDC grew out of during the planning and construction of the Vine Street Expressway.

At 10th & Vine, the building would extend the vitality of 10th Street—Chinatown’s main street, from the Friendship Gate at Arch to the 10th Street Plaza sitting atop the Expressway. A three-story community center would front Vine Street, with the tower portion set back along Pearl Street.

Andy Toy, PCDC’s managing director for the project, emphasized the community aspect of the Eastern Tower. It will feature a recreational center, a daycare/pre-school facility, and 144 housing units. “Mixed income is important, and affordable housing is vital,” he said, explaining that 78% of the residential portion would be for the median area income (“market rate for Chinatown”), and 22% affordable, possibly subsidized. “We also hope to have a museum of sorts, maybe a picture gallery with the history of Chinatown.” 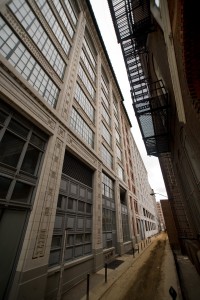 Given that each project is still in planning, the potential for collaboration on Pearl Street is significant. Places for celebrating Chinese New Year, playing chess, practicing tai chi, and dining alfresco were among the ideas induced from an informal brainstorming session with Hood, Isa, Toy, and others from PCDC, AAI, and Holy Redeemer. The collaboration extends all the way to Broad Street, really, as Pearl Street passes by the Reading Viaduct, Post Brothers’ Goldtex development, Sunday Breakfast Rescue Mission, Roman Catholic High School, and the Packard apartment building, among others. Incidentally, Tejoon Jung of KlingStubbins is the architect for both the Eastern Tower and the Goldtex conversion.

Great is the number of community members who stand to benefit from a newly knitted Pearl Street. Isa hopes to have all of their input. “We’re hoping to have a June project of building on Pearl Street, with tables and chairs, for neighbors and the community to be engaged,” she said, stressing that it’s still in the research and plan phase with Hood. By October, she expects to have project ideas and schematics that AAI can present to neighbors at a daylong feast, gain feedback, and establish a plan for buildout from there.

Toy indicated that PCDC is aiming to have funding for the Eastern Tower in place by fourth quarter 2013, with two years of construction to follow. Along the 10th Street side of the project, he noted that the roof garden on the three-story portion will fashion a view corridor that, thanks to framed passages, will appear layered, akin to a pearl. “Of course a pearl is an irritant,” Isa quickly interjected, to great laughter.

But like its eponym, Pearl Street will build off of an irritant—in this case an ugly and undesirable streetscape—and ultimately serve a great value.