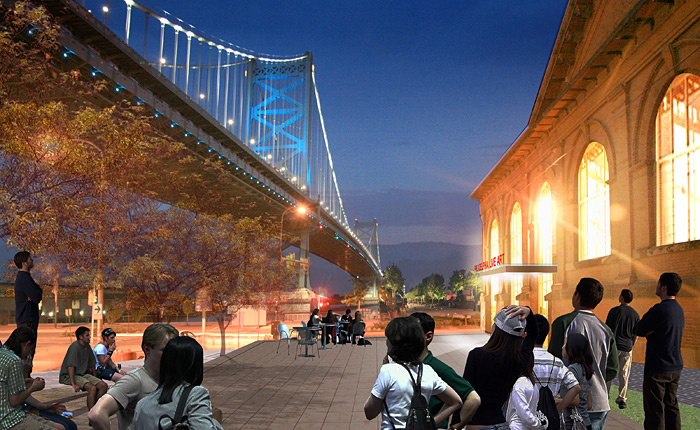 Philly Fringe of the near future | Image: WRT

Much of that momentum hasn’t been privately led, instead coming from public investment and civic engagement guided by the recently complete Central Delaware Master Plan. The Delaware River Waterfront Corporation is the group responsible for doing the Master Plan’s legwork, ensuring the document’s ongoing relevancy in reshaping the way we utilize and access the central waterfront.

DRWC is taking the long view on implementation efforts, focusing on a large number of small projects with short construction timetables and with relatively little investment. The goal is to make the small parts add up, earn buy-in from investors and public officials, and eventually cash in for much larger moves down the road.

DRWC’s current projects are geographically scattered along the vast stretch of the Central Delaware—from Columbia Avenue in the north to Pier 53 in the south.

But with the recently released RFQ for Penn’s Landing—a study to figure out how to design and engineer a new eight-acre park that would cap I-95 and Columbus Boulevard and connect Old City directly to the waterfront, much media attention has been directed at one geographic location. Last week design and engineering firms furiously finalized their qualifications and now await their selection fate. 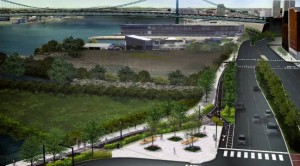 That project is only one of many that DRWC is currently overseeing.

On proposed bike and pedestrian trails, the Penn Street portion of the Central Delaware River Trail recently broke ground. The project will set design standards for future trail phases, taking all the recommendations of the Waterfront Master Plan and building it there. The trail will run from Spring Garden Street and connect to the finished portion of the trail by SugarHouse Casino.

Last month also saw design work begin for the Spring Garden Connector project, a streetscaping effort meant to overcome I-95’s barrier-like presence between Northern Liberties and the riverfront with a safer passage through. That project will join similar efforts at Race Street to the south and Columbia Avenue further north, both of which are already substantially complete. 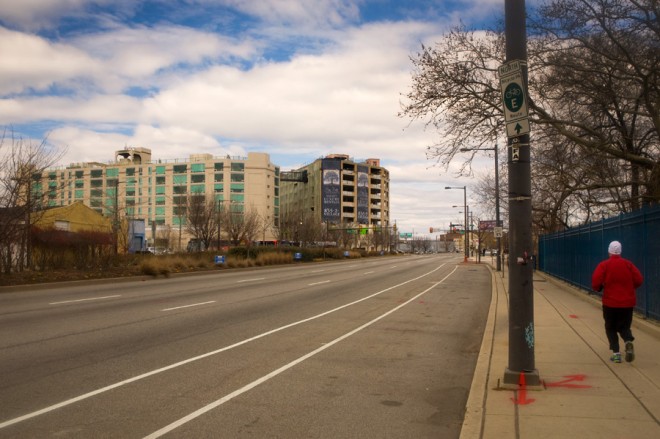 One large public open space, Pier 53, is well along to implementation and final design work is almost complete. The project, which will connect Washington Green at the end of the pier to the waterfront, will significantly increase waterfront access for the public and allow people to walk out into the river at a similar distance as the Race Street Pier.

The new open space will serve a dual function, becoming the southern edge of a future ecological wetlands project that will extend to Pier 70. The goal is to create a functioning green space that also improves the localized habitat conditions and engaging the public in understanding and appreciating the ecological health of the river.

To that end, native gardens, floating wetlands, rain gardens and rubble meadows made out of re-used large concrete slabs will all be featured in the new open space.

Applied Ecological Services, Inc. is the lead designer for the project. Design work is expected to be complete in six weeks with construction expected to begin this summer. 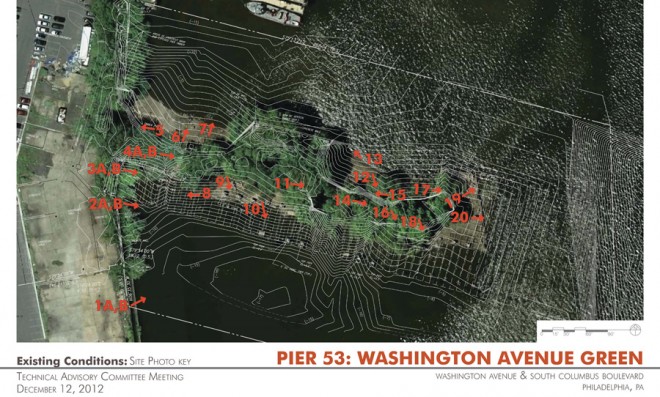 While the number of projects seems large, the total dollar amount isn’t; the largest single public investment stands at $1.55 million for the Penn Street Trail. That money is coming a various sources including the city capital budget, the Delaware Valley Regional Planning Commission, and the William Penn Foundation.

The low dollar, high project count is the result of a small moves initiative that the Master Plan recommended when outlining implementation goals. According to DRWC’s Karen Thompson and Lizzie Woods, their project implementation efforts are going according to that plan.

“The Master Plan is a 25-year vision so we’re not trying to hit a home run off the bat,” explains Thompson. “For us, ‘success’ is doing a little bit at a time.”

“It’s a major project but [the engineering and design study] is still a small step,” says Thompson. “We want to get this study out of the way and move on to the next phase as quickly as possible.”

While the small steps initiative was the result of the Master Plan’s recommendations, DRWC has defined those steps. 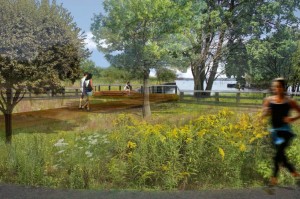 When tasked with stewarding the Plan’s implementation, Woods says like most public projects these days funding sources weren’t clear from the beginning. To start things off, DRWC decided to hit the core elements of the plan. Connecting to the waterfront and developing usable green spaces were seen as core principles.

This philosophy has guided grant applications and funding initiatives for the three connector streets projects and the Penn Street Trail as well as greening initiatives such as Pier 53 and Penn’s Landing. “Funding has coalesced into the reflection of these core elements,” says Thompson.

Thompson and Woods both believe the small steps approach is the key in delivering long-term success for the plan. The trick now, they say, is using the small actions to elicit buy-in. “Hopefully we won’t always be taking these small steps,” says Woods. “We believe the work we’re doing now is setting us up to do bigger projects down the road.”

If the past is indicative of future waterfront planning efforts, the Schuylkill River Development Corporation’s decade-old Master Plan implementation efforts give a clue for how the Central Delaware’s current efforts will play out.

Much like the Central Delaware, numerous public improvement projects have become reality thanks to a “dynamite Master Plan,” says President and CEO of the Schuylkill River Development Corporation, Joseph Syrnick. 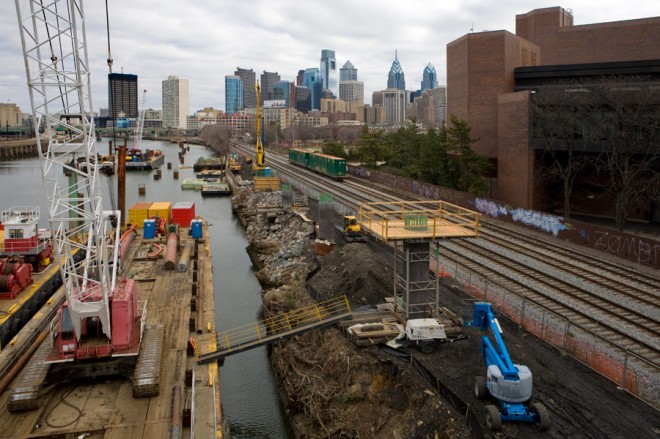 A dynamic public space has formed with direct access to the water. Brownfield sites have been reused at Grays Ferry Crescent and the Schuylkill River Trail now directly ties into a surrounding network of improved bicycle, pedestrian, and open space amenities.

Also similar to the Central Delaware, SRDC’s success has largely come from a small steps initiative. “You need a vision in the Master Plan. But it needs to be reasonable so it doesn’t suck momentum out at the beginning,” says Syrnick. “Funding is always hard to come by so you have to start small.”

Ten years later, and numerous improvements to boot, no one can deny the Schuylkill River’s success in achieving what its 2003 Master Plan set out to do. Simply put, it has been a long-term success thanks to short-term initiatives.

Attaining that type of success remains to be seen on the Delaware River, a waterfront with a Master Plan not even a year old and with challenges much larger than anything faced on the Schuylkill. For one, a significant amount of uncertainty remains surrounding I-95’s future and how its planned upgrades will affect access to the river. And unlike the Schuylkill, much of the Central Delaware is still an active port with numerous private landowners.

To overcome these challenges, Syrnick believes SRDC’s experience on the Schuylkill offers lessons to be learned for the Delaware; he says difficult issues can be managed if and when a large body of stakeholders are engaged. For SRDC, that meant working with Penn, Drexel, Sunoco, and others to make sure everyone was on board with the Master Plan’s mission.

For larger projects to move forward and overcome funding obstacles like those that Penn’s Landing faces, or even longer-term recommendations like implementing a rapid-transit line along Columbus Boulevard, Thompson and Woods agree with Syrnick—they say everyone from PennDOT and the Mayor’s Office, down to local open space advocacy groups are on board, and must continue to be engaged, with making Penn’s Landing redevelopment, and perhaps other big move items down the road, a reality.