Editor’s Note: One of the most important questions facing Philadelphia is how to repurpose the city’s still enormous collection of vintage factories and mills. There’s no single or easy answer. Moreover, the city’s history as a place of manufacturing innovation has been largely lost in the race to define Philly as a colonial sort of town. But we’ve been noticing that beyond the expected loft condo conversions, art studios, and craft manufacturing, a new wave of industrial spaces being used for shows, parties, and celebrations. We sent Theresa Stigale out to scout some of these places in Kensington and Fishtown and to uncover the history behind the venues. 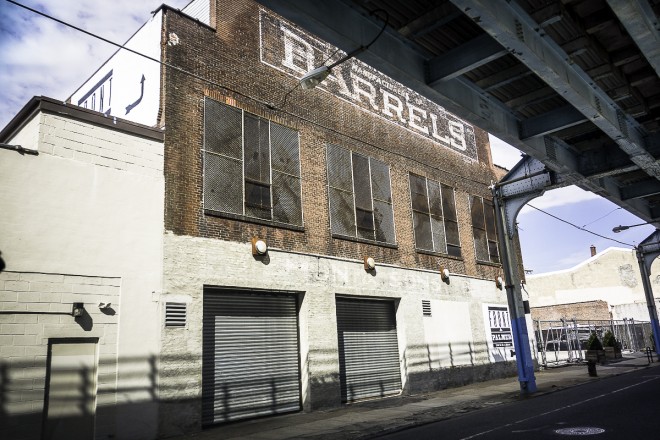 Skip Schwartzman and Lynn Buono bought the old Siemans Brothers Barrel Factory and an adjacent pickle factory at Front and Palmer Streets in 2009 to create an event space for their company, Feast Your Eyes Catering. The current building, erected in the 1920s, replaced a late 19th century wood timber factory. With approximately 10,000 square feet, FYE has the capacity to host 250 guests for weddings and events with dancing, and up to 400 for cocktails and other occasions, the building is a case study in adaptive reuse. Old roof and floor joists were reclaimed for benches and other embellishments. Chandeliers made entirely of reclaimed materials by local multidisiplinary artists R.J. Thornburg & Warren Muller of Bahdeebahdu drop from the wood and steel beam ceilings. Solar panels, garden areas, and even active bee hives make maximum use of the rooftop. 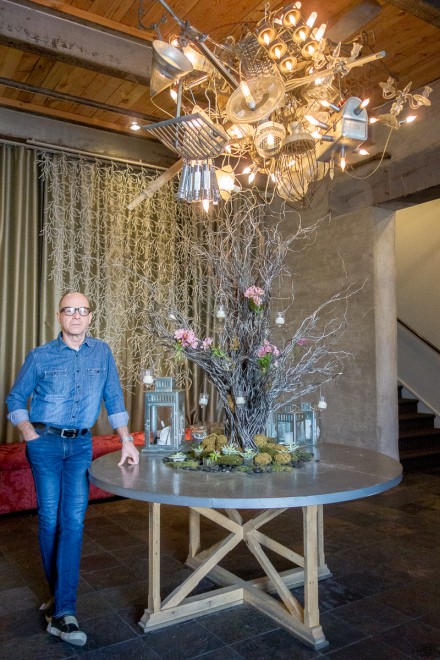 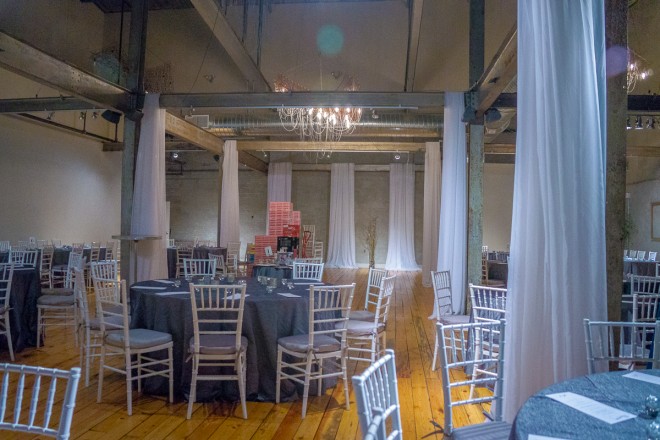 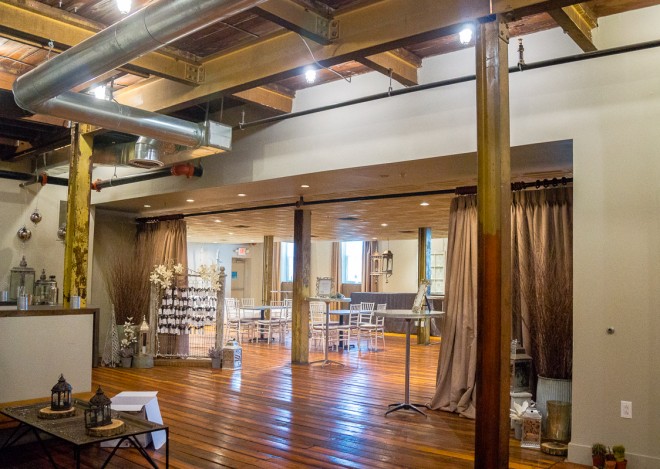 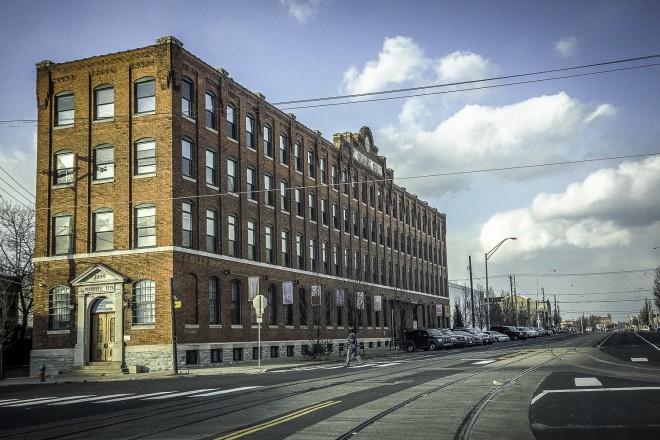 The Crane Plumbing Company imported cast iron tubs from Trenton, NJ by train and stored them on site to be distributed throughout the greater Philadelphia area. The event space known as the Icebox was an open train shed with penetrations for train deliveries. The name Icebox came into use after the Crane company left, when the building housed a seafood company and the products were flash frozen there, in a rebuilt space for that purpose. In the 1960s Random shrimp shells could be found even on the upper floors. The space is now used for weddings, and most notably for benefit art auctions by InLiquid, the arts collective located on an upper floor of the Crane Building. An outside building was used as another distribution center in 1906. In the courtyard, Crane co-developer and Temple University art professor Nicholas Kripal uncovered a sea of Belguim blocks, and used recycled those historic stones to pave the lot. 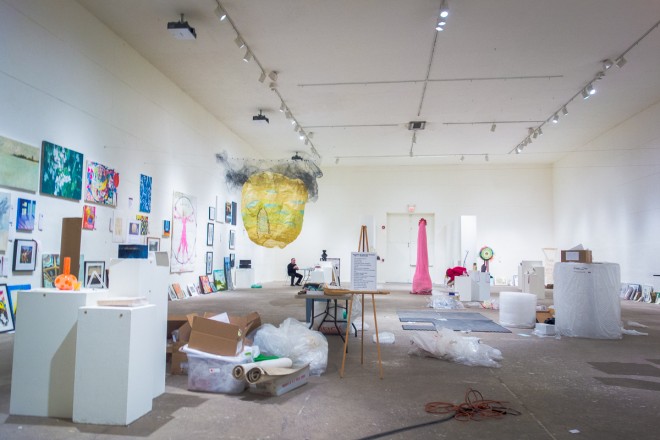 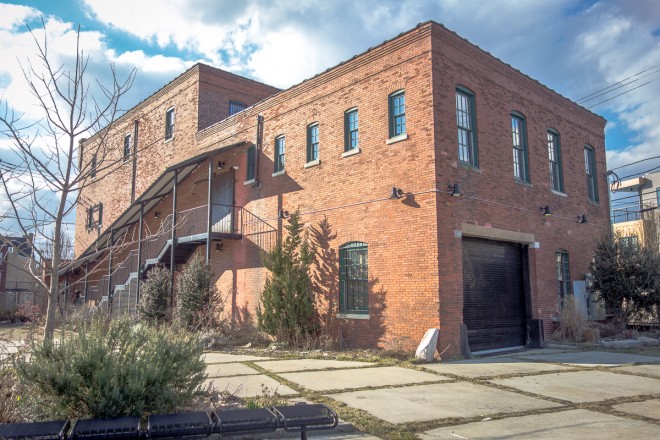 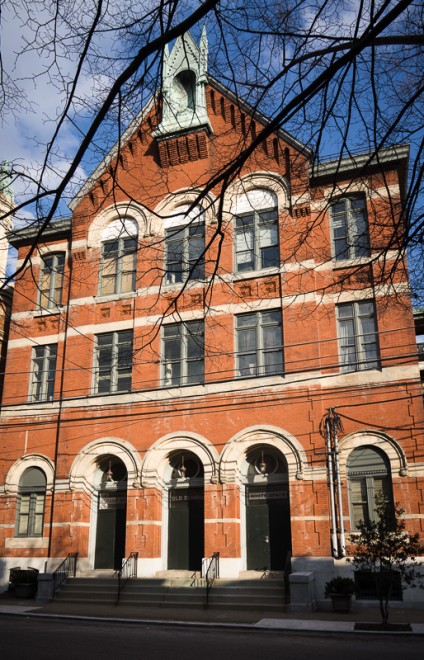 One block to the east of the Crane Arts, the skyline is dominated by the prominent twin spires of St. Michael’s Church, founded in 1831. In 2011, a development team, including Nicholas Kripal, bought the school adjacent to the church and created art studios and a sunny, flexible open space for performances, exhibits and gatherings, known as The White Space. 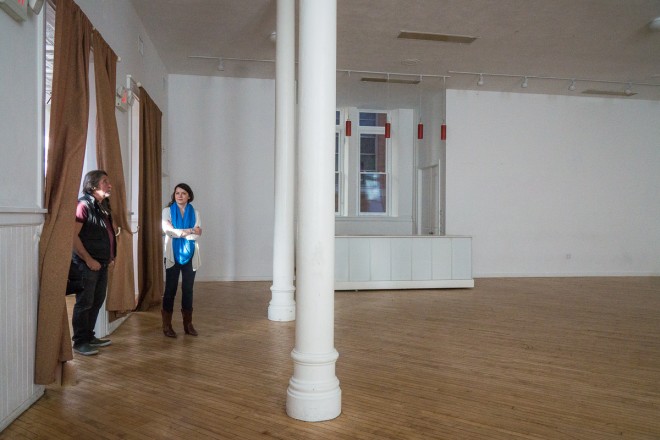 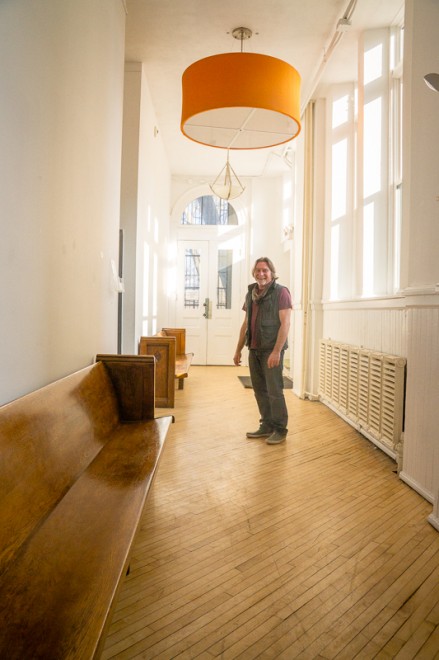 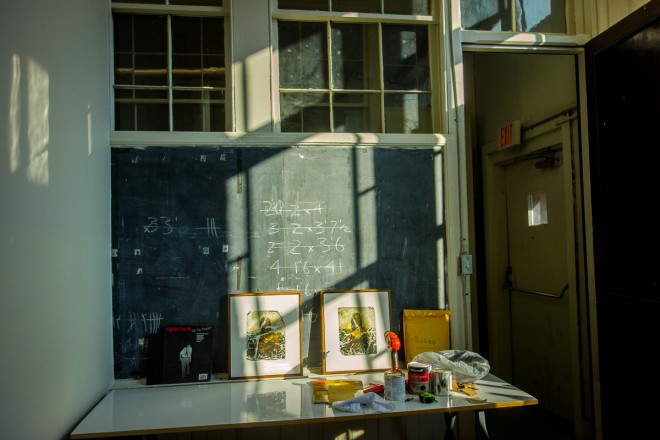 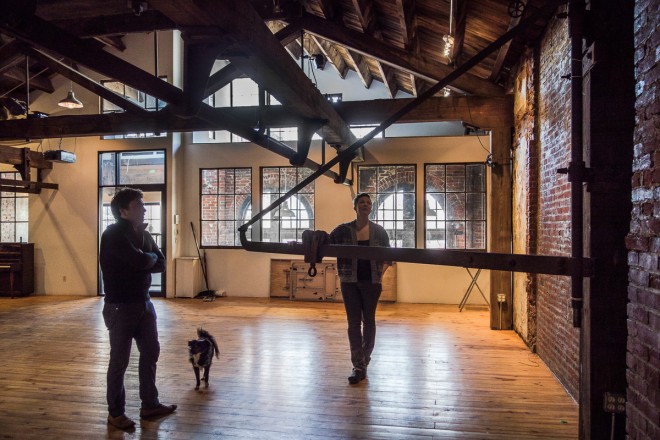 When Catherine Birdsall and Ben Reisman bought the Maas Building in 2008, they were prepared for a major renovation of the building that was boarded up and used as storage for an architectural salvage business. Located in Kensington at 1325 N. Randolph Street, between Fifth and Sixth, Master and Thompson Streets, this 1859 brick and heavy wood timber building is named after brewer Charles Maas who operated his brewery there. In later years it was used as a repair shop for Girard Avenue trolleys. Today, the building houses a few studios and features an event space a on the second floor that can be rented out by the hour, day or per event. Guests enjoy the flexibility of the open span space with abundant light. One the first floor, an additional bi-level space is being prepared for a music studio and event space, leading to the adjacent garden. 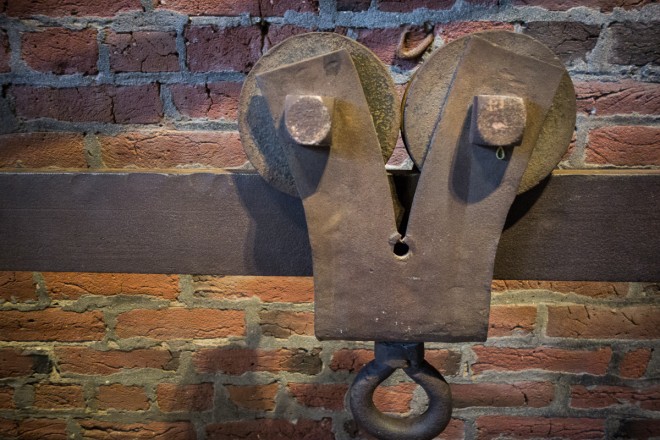 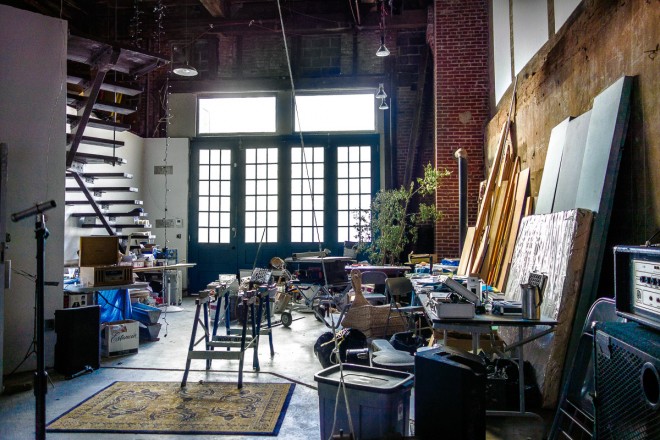 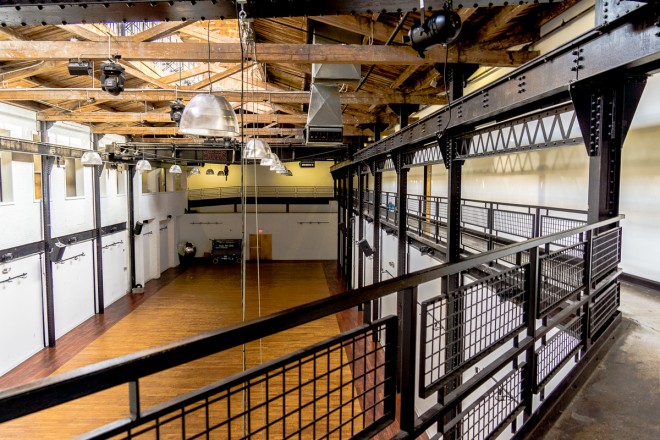 In 2008, a Philadelphia development partnership, 2424 E. York Partners, bought the 80,000 square foot Jacob C. Holtz Company, an active manufacturer of metal stampings and furniture casters. With the scale and ambiance of a cathedral, and born of industrial America, the Skybox was created out of an enormous 7,000 SF manufacturing space with overhead cranes and pulleys. Today the Skybox hosts events ranging from weddings to art exhibits and performances and is a great example of former industrial space adaptively and creatively repurposed. In addition to the Skybox, there are 100 artist and work studios, offices and showrooms, ranging from 350 to over 5,000 square feet. 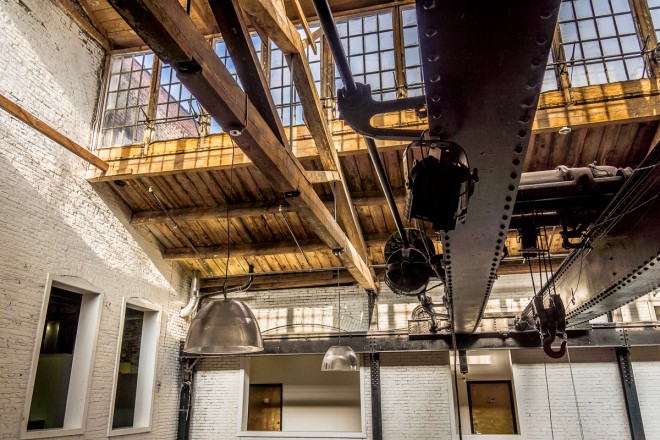 Ceiling detail of the Skybox at 2424 Studios | Photo: Theresa Stigale 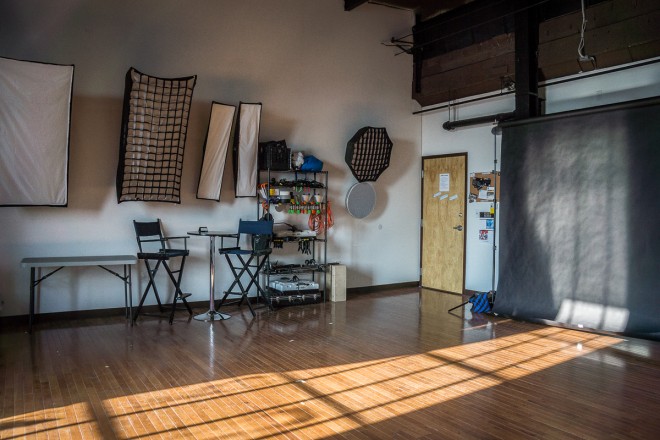 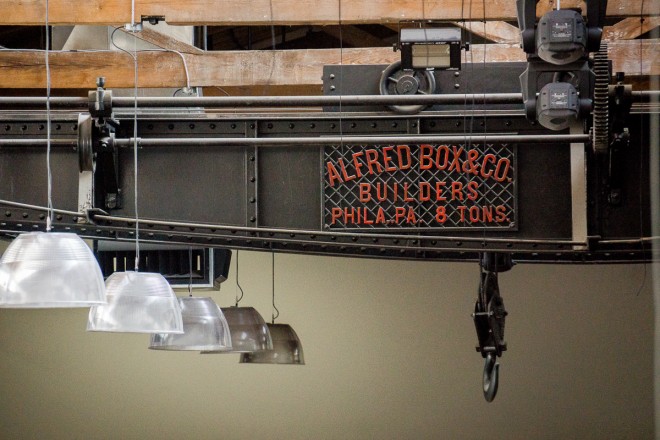