It Wasn’t Always The Avenue Of The Arts 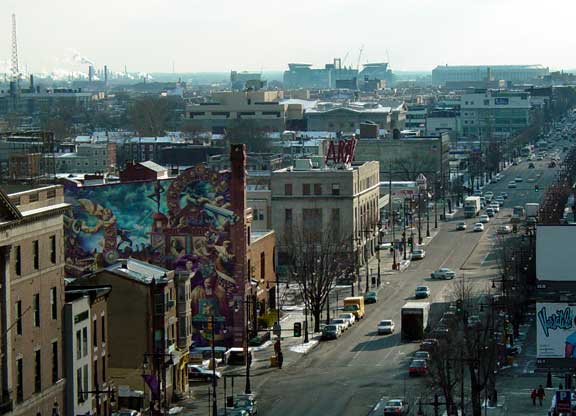 South Broad Street, from a then-new Kimmel Center, 2002. Citizens Bank Park is under construction next to The Vet in the distance. | Photo: Bradley Maule

Last week, while walking north along the short stretch of South Broad Street that separates my home and office, I realized: I have short-term memory when it comes to place. Although I’ve lived in South Philadelphia for the past five years, I failed this test of urban memory: I couldn’t quite recall what preceded 777 South Broad, Symphony House, the Kimmel Center, or the Wilma Theater.

So, what was there anyway? I put the following images and text together to chronicle the histories of the four major sites that have been developed in the past twenty years–perhaps to help us all remember South Broad’s more recent, but seemingly forgettable past.

By the 1990s, South Broad Street was virtually obsolete. Gone was the bustling thoroughfare that had been lined with the stuff of cultural capital; left in its place was a strip dotted with underutilized buildings and vacant lots. In 2007, Ed Rendell told a New York Times reporter, “On a Saturday night in 1991, you could walk the mile from City Hall to Washington Avenue and you wouldn’t have seen 100 people.”

Where the Wilma Theater stands was a Philadelphia Parking Authority-operated surface parking lot. The lot was opened in the in the 1960s, when the entire block was cleared in accordance with the prevailing redevelopment principles of the time. The principles held that old buildings were agents of blight; private developers would naturally prefer to build new. The properties demolished included a two-story commercial building topped by billboards at the southern end of the site (where the Wilma stands) and the storied Hotel Walton at the northern end.

The first step toward redevelopment took place in 1991, when developer Norman Wolgin of Lobro Associates purchased the lot. City officials had struggled to sell the property for eight years until striking a deal with Wolgin, who planned to build a home for the Wilma Theater and an attached parking garage for the adjacent Hershey Hotel (now the DoubleTree Hotel). 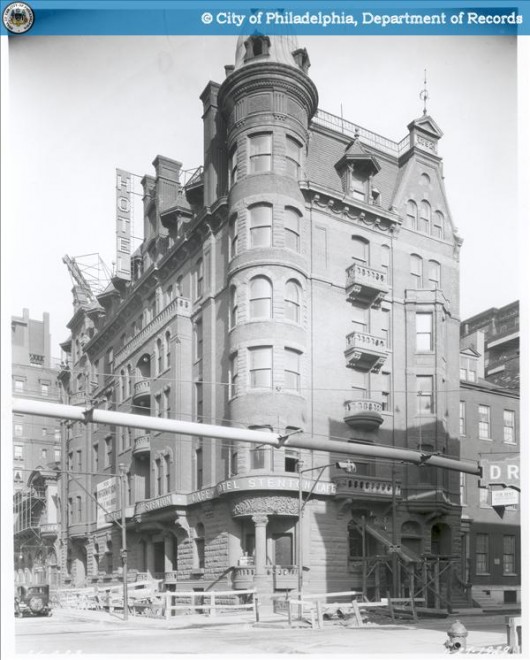 The Hotel Stenton and the Broad Street Theater in 1929. Photo: PhillyHistory.org 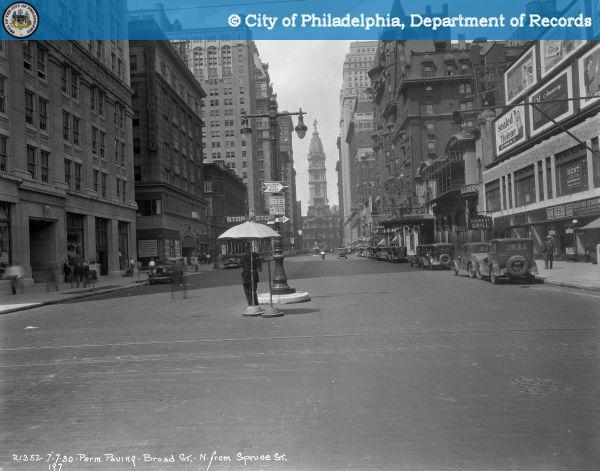 One year later, the hotel had been replaced. Photo: PhillyHistory.org 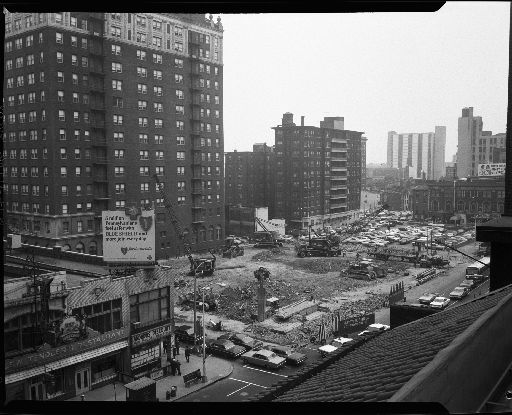 After demolition of the Hotel Walton in 1967. Photo: Free Library of Philadelphia

Beginning in the 1980s, city planners envisioned a new symphony hall for the west side of Broad Street at Spruce. Venturi Brown Associates was to design the hall. When finally funds were raised much later on and a different architect chosen for what would be the Kimmel Center, the project was heralded as the beginning of a new era for South Broad.

Ten row houses and a park had to be cleared from the two blocks bound by Spruce and Delancey, Broad and 15th to make room for a performing arts center. The homes, which mirrored those across the street on Spruce, included the last home of architect John Notman (1810-1865). Notman was a founding member of the American Institute of Architects and is credited with popularizing the use of brownstone. In response to the loss of the historic (but undesignated) buildings, Philadelphia Historical Commission preservation officer Richard Tyler conceded, “Any building is a loss. But weighing balance here, which is part of what we do, I would go back to the concept of public good. The creation of an orchestra hall overrides that loss.”

The park, named Arco Park after the company that commissioned it (the Atlantic Richfield Company, whose pre-merger inception as Atlantic Refining had its headquarters across the street at Broad & Spruce), was designed by the last adherent of the Bauhaus, Herbert Bayer (1900-1985). For a short series of photos of Arco Park, click HERE. 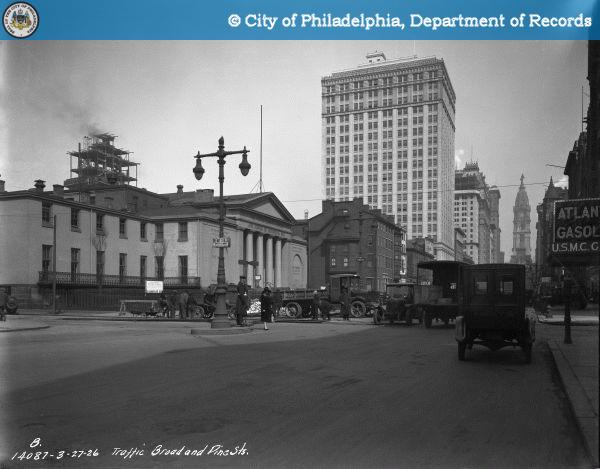 The block in 1926, just north of the Pennsylvania Museum School of Industrial Art. Photo: PhillyHistory.org 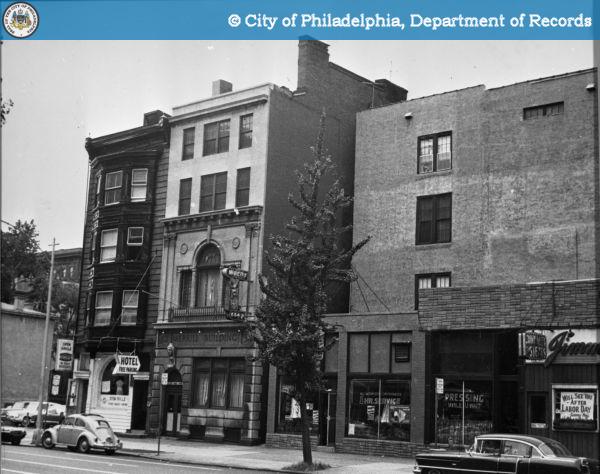 Symphony House, the high rise that dominates the southwest corner of Broad and Pine Streets, replaced nothing more than a decades-old gas station and parking lot.

The lot at the Broad and Pine Streets came into being in the 1930s, when a block of four-story, two-bay brick row homes was cleared to make way for a drive-in gas station. This was not uncommon. Throughout the early 20th century, speculators hoping to seize on a fledgling market took advantage of weak land use policies, establishing car-related businesses on what had been pedestrian oriented avenues.

The lot remained in use 2004, until it was sold to developer Carl Dranoff. Having recently completed the conversion of the GE building at 32nd and Walnut Streets into the West Bank, Dranoff proposed what would be the 163-unit luxury condominium Symphony House. 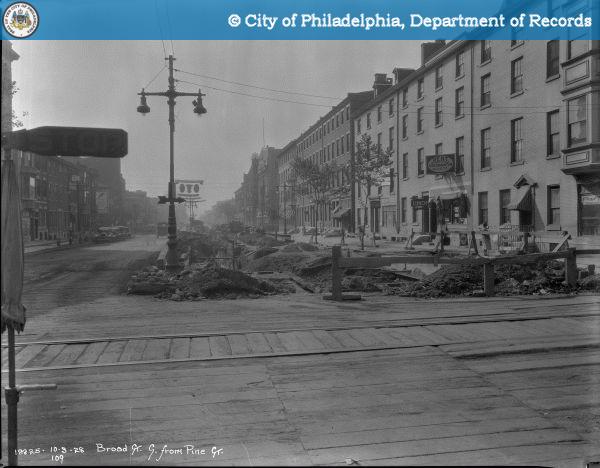 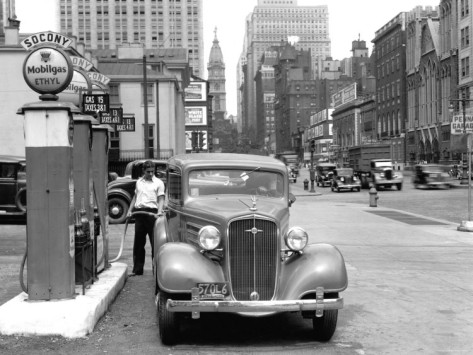 The gas station in the 1930s. Photo: AllPosters.com 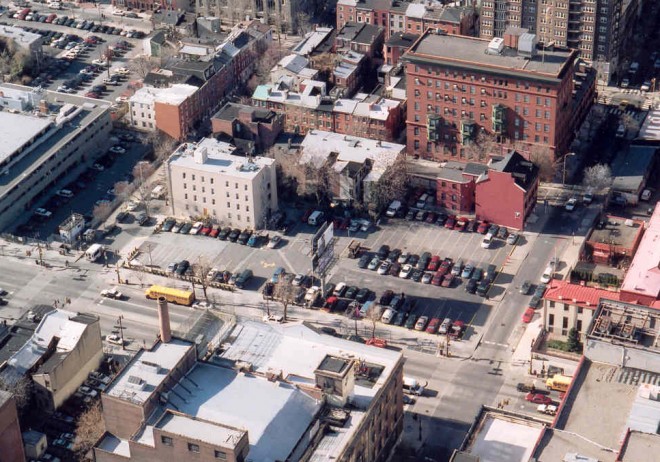 The site prior to construction of Symphony House. Photo: Dranoff Properties

As recently as the 1980s, the block bound by Fitzwater and Catharine Streets to the north and south and by Broad and Watts Streets to the west and east was still home to a privately-owned institution known as the Broad Street Hospital.

In 1988, the hospital and nursing home were closed. According to its owners, doctors Nicholas Canuso, Raymond Silk, and Eugene Spitz, it had fallen victim to delayed insurance reimbursements and discontinued support from commercial lenders. Although the owners planned to sell the facility for reuse, no buyer emerged and the site remained vacant.

After almost two decades of uncertainty and failed development proposals, developer Carl Dranoff, with his recent success at nearby Symphony House, stepped in with a plan to replace the hospital with a luxury apartment building. In accordance with that plan, the constellation of vacant properties, including 10 row houses along Watts Street, were demolished in June of 2008. The hospital had been demolished sometime before. 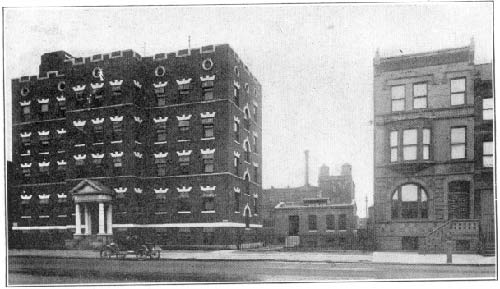 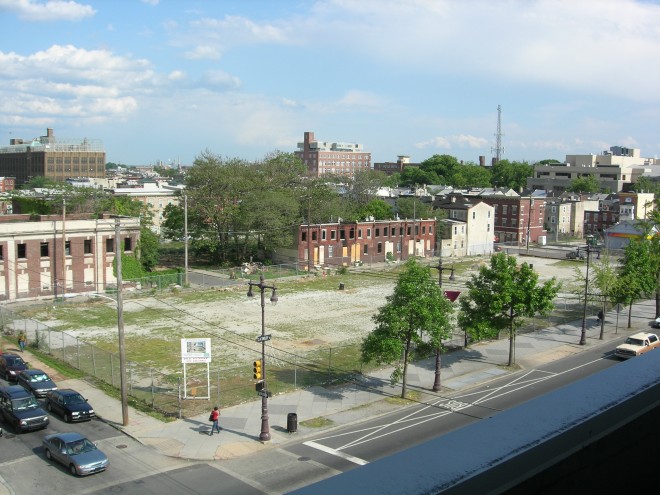 Prior to breaking ground for 777 South Broad. Photo: Dranoff Properties 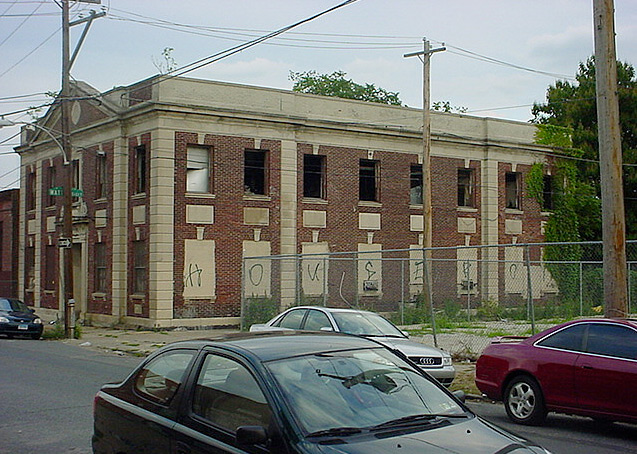 Originally Eagleville Dispensary and later hospital offices, this building was the last to be demolished. | Photo: Flickr user strayolive