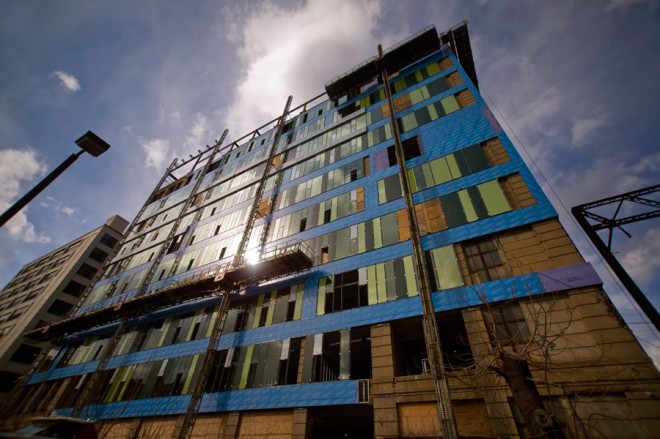 Coat of many colors: the metamorphosis of Goldtex | Photo: Bradley Maule

“We have a budget, and we’re sticking to it,” states product director Josh Guelbart. This matter-of-fact assessment underscores Post Brothers’ momentous progress after the September ceasefire in the infamous Goldtex trade union standoff. “Now we’re focused on getting our building done.”

Considering the attention that’s been paid the contentious project, reaching a point nearing completion has been no small feat. And yet, Goldtex is nearly ready to rent—and on budget. While the lobby and leasing office are still being finished, tours began last week for prospective lessees at the 163-unit apartment building.

Even in its mid-metamorphosis state, Goldtex is a benchmark in the transition of the neighborhood, call it Callowhill, or the Loft District, or Chinatown North, or Eraserhood. The former shoe factory, built in 1904, is undergoing an extreme makeover designed by KlingStubbins, whose extensive local legacy includes Penn Center, Independence Mall, and more recently, the USPS’ Mail Operation and Delivery Unit at 30th & Chestnut. It’s also worth noting that KlingStubbins is the architect of the mixed use tower proposed by Philadelphia Chinatown Development Corporation on just the other side of the Reading Viaduct from Goldtex. 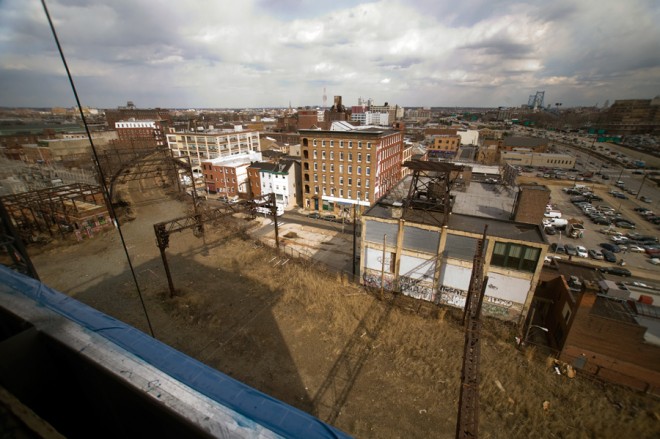 Viaduct below: the cable to the left is not a zipline . . . yet | Photo: Bradley Maule

“We love the vision for the Reading Viaduct,” Guelbart says. “If the city’s actually able to move it forward, we’re going to make a direct connection to it [from Goldtex].” As attendees of last night’s discussion on the Viaduct would attest, there is promise of that, as it’s very much a part of the City’s Philadelphia 2035 Central District Plan, released this week. 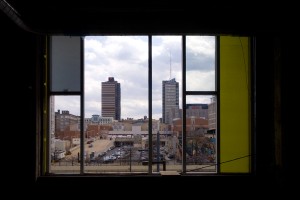 Where the hope of the Reading Viaduct is, like New York’s High Line, spurred economic development, Goldtex may well serve as its harbinger. An as yet undetermined restaurant in the Osteria-Alla Spina-Route 6 vein of neighboring North Broad Street will occupy the ground floor. Design wise, the building’s transformation intentionally shirks its industrial past for a more contemporary layout. The 10′ tall glass panels, of multiple colors and multiple materials, are meant to mask the vertical columns typical of other loft conversions in the neighborhood.

Perhaps more importantly, they envelop the building, set out six inches from the existing structure, allowing for extra layers of insulation, a decrease in drafts and heat escape, and maximizing natural light. The glass exoskeleton is among the items on the Goldtex bullet list, which also includes 100% wind energy, locally sourced materials (the interior designs are even handled in-house), a rainwater retention system, and an enormous bicycle parking area, toward the bid to achieve LEED Silver certification.

It’s an ambitious goal for an ambitious bunch. As work wraps up at Goldtex—move-in is scheduled to begin May 1st, its roof terrace (which includes a gym, pool, and hot tub) to be completed in early summer—Post Brothers is already making plans at the Atlantic Building, which they purchased last summer, starting with a name change. At Broad and Spruce, Guelbart explains, “it’s not just on South Broad Street, it is South Broad Street. It’s going to sound like it.” While the name has not yet been decided upon, all signs indicate it’s going to embody South Broad chic. 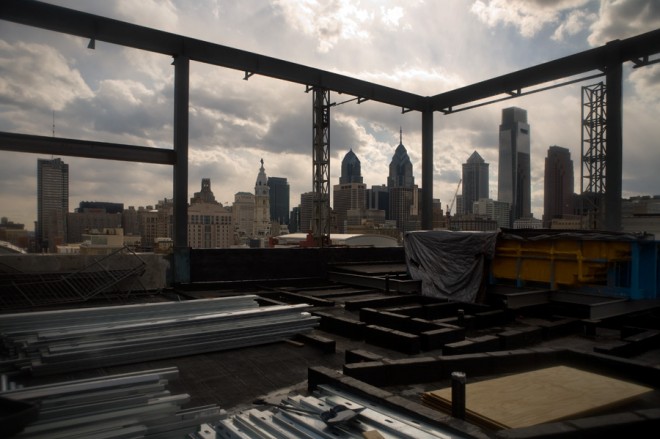