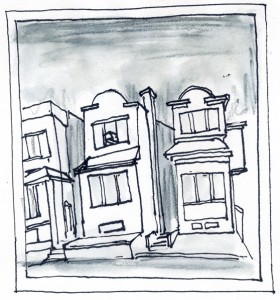 Mike was born in 1961 and spent his childhood in a house only three doors down from his grandparents. In the 1960s and 70s with American society being broadly upturned and Philadelphia undergoing a severe economic collapse, Olney’s traditional ways persisted. “Olneyites didn’t adopt the Philly accent,” he says, “they didn’t even go into Center City that often. We just kept to our border of Roosevelt Boulevard in the south to Cheltenham Avenue in the North, and Front Street in the East to Eighth Street in the West. We used to call the neighborhood, ‘Das Bund’”–The Republic.

From Mike’s childhood house we walked the two blocks to “Fis Street” to what still is the commercial center of Olney. The first building Mike pointed out was what used to be The Fern Rock Theatre, but is now a dollar store. Mike reminisced about how a local pastor would stand outside of the box office window turning away youth who were trying to see films intended for adult audiences. Although this pastor was not from the Incarnation of Our Lord Church and School where Mike’s family belonged, just his presence in this tight knit community was enough to force Mike and his friends to turn around as soon as they got close to the theater. 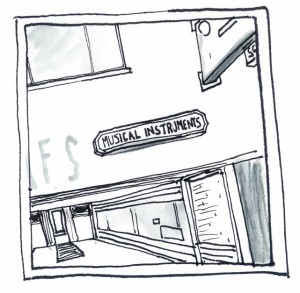 We walked a bit further down the block and came to a building that now advertises Gibson School of Music, but was once the home of the legendary Zapf’s Music. You can still see the faded letters spelling out Zapf’s on the façade. “Herr Zapf would give lessons to almost every kid in Olney,” said Mike. “Back then, you’d constantly hear music coming from the living room windows of the homes. It was never unusual to see a marching band come parading down the street. Music was always important to the Eastern Europeans, and we brought that to Olney.”

Mike ended our tour down “Fis” Street by stopping in front of a nondescript brick building. He told me that this used to be Bernstein’s Books, where Mike incidentally first defied the cultural rules of the neighborhood. During Mike’s freshman year at Cardinal Dougherty the Catholic Herald had just put out a list of banned books, which in Mike’s adolescent subversion became his reading list. He went to the bookstore owned by Russian immigrant Mr. Bernstein because as he believed, “Mr. Bernstein wasn’t Catholic, so he didn’t have to follow the rules.” After thumbing through Bernstein’s collection of left-wing books, Mike came across Oscar Wilde’s A Portrait of Dorian Gray (which was originally published by Philadelphia’s Lippincott’s Magazine in 1890). Before he left, Mr. Bernstein asked if he’d like to sign up for a book club. Mike signed his name and then took the book down to Rittenhouse Square where he read it in anonymity, before destroying the evidence and returning to Olney.

He wasn’t back in the neighborhood for more than an hour before his parents and an administrative priest from Cardinal Dougherty confronted him about the book. It turned out that Mr. Bernstein had a deal with the administration at Cardinal Dougherty that they would buy textbooks from him in return from information on seditious literary acts. A rather stunning betrayal, but now Mike just laughs at this story and cites it as evidence of the tight-knit community.

We probably don’t think of any particular neighborhood in Philadelphia as German–not even Germantown. That may be because as an immigrant group–quite unlike Italian Americans of the same period–Germans lived in many neighborhoods and were relatively integrated. Olney began attracting African-Americans in the 1960s and Korean immigrants in the 1980s. Olney High School is often cited as the most linguistically diverse school in Philadelphia. The neighborhood may not be the same as when his family lived here, but Mike acknowledges it’s fulfilling to see new groups of people running the shops and living in the homes.

Before our tour was over, Mike asked me if I had ever seen “The Sound of Music.” I said that I hadn’t. He gave me a moderately puzzled look, and then went on to explain, “Well in the last scene the Von Trapps are fleeing Salzberg over the Alps and the movie ends. But you know where they went after.” He took a deep breath. “Olney.”

The Von Trapps had lost everything escaping Europe. But, said Mike with tears beginning to form in his eyes, “the people of Olney organized singing tours in all of the churches in the area, and helped them get back on their feet. The Von Trapp children made enough money to finally buy land in Vermont (which reminded them of Austria), and they built their ski lodge where people from Olney still go skiing today.”

“They were just such brave people.”