When 52 year old Mike Toklish’s family arrived in Philadelphia in early 1908, more than a half century before he was born, men holding the flags of various nations greeted his relatives at the port. Once his ancestors found the man with the German flag they were asked if they knew how to brew beer. They said that did, and they were quickly sent to work in Brewerytown and were moved into a trinity on 3rd and Arch Streets.

Germans in fact had been coming to Philadelphia very nearly as soon as William Penn secured his charter from the King of England. The German Society was founded in 1764 to aid German immigrants in language and cultural assimilation as well as legal issues. At that time, about 20 percent of Philadelphians were of German ancestry. This rate increased significantly in the next century. By 1860, fully one-third of Philadelphians had been born in Germany.

But the work was brutal and as Mike estimates, 20 people lived in the small tenement house. After time, his grandparents were able to pool the money they saved from their brewery jobs to purchase a bar-restaurant on Girard Avenue just a few blocks from Front Street. Over time, the place became profitable enough that family members no longer had to work in the breweries. And after a few more years, they made the decision to move to the newly developed Olney section of North Philadelphia.

Until the 1920s, Olney consisted of farmland and estates for the wealthy. But after Fisher Park was developed out of the estate of Joseph Wharton, founder of Swarthmore College and the Wharton School of Business, and factories such as Heintz Manufacturing Company moved in, Olney became an attractive place for immigrant families, especially the Germans. 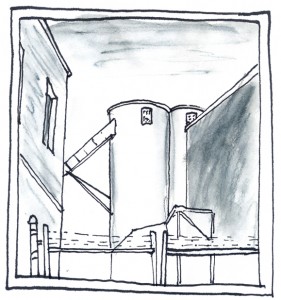 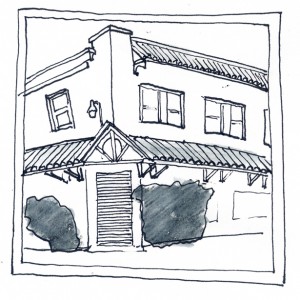 Mike’s grandparents moved into the corner house and rented out the remaining properties to the rest of the family, including Mike’s parents.

With their terracotta roofs, refined façades, and functional back allies–where families could run their clothes lines–the houses are almost unchanged today. Each basement retains its coal shoot window; the shuttered coal elevator and garage where coal was stored and then transported to the surrounding houses remains across the street.

The family made a good life for themselves on Lindley Street, although it was not without its own strife. As Mike recalled, the neighborhood was under close watch as Germany began to wage war in Europe, and it was common for German immigrants to be targeted by police.

“My grandparents were enjoying a night out at a beer garden in the summer,” Mike said, of a night in the late 1930s, “when in the middle of the celebration, a group of German nationalists raised the swastika. This was the first time my grandparents had seen it in America and they were shocked. When the police came my grandparents pleaded with them that they were not Nazis and were actually Austrian by decent. But the cops didn’t listen and threw them in jail for the night. When they came home their house was completely ransacked by the police.”

In some old family photos, indeed, there are crowds gathered with the Stars and Stripes right next to the swastika and Iron Cross. But after the US entered World War II, Mike’s family was much more careful of the company they kept.