Death By A Thousand Curb Cuts 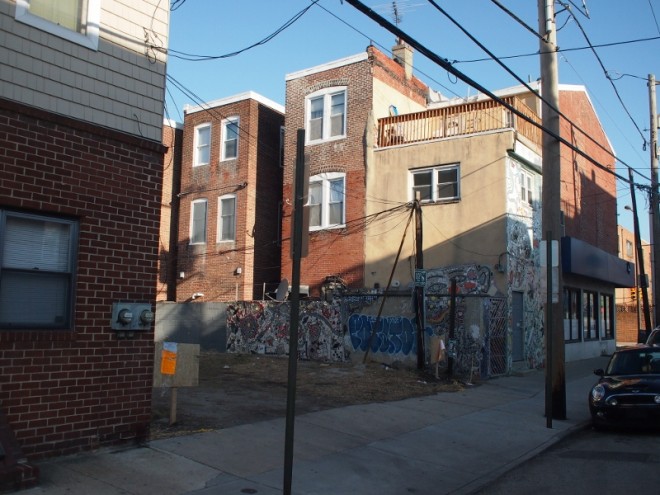 What do we expect from a development parcel? If you are the owner of the parcel, you expect, at the very least, to make some money. If you’re a city official, you’d like the parcel, if it is indeed vacant or underutilized, to throw off some tax revenue to fund city services. You may also hope the development adds value to the surrounding properties by adding amenities or leveraging a neighborhood’s strengths, like walkability or density or beauty.

If you’re a Philadelphian, you’re probably not accustomed to expecting that the development might make the city more attractive, more lively, or more interesting. You may not have realized that was an option. But, in fact, it’s one of the foremost goals of the new zoning code. 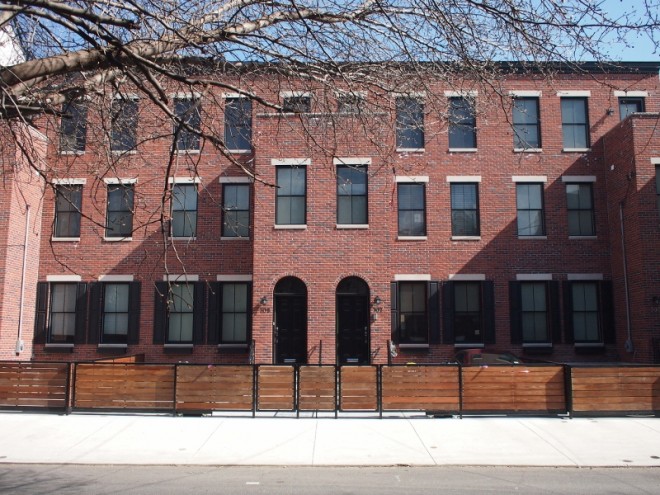 In Bella Vista, where I live, that expectation has been undermined for the last two decades by a stream of poor quality and unimaginative new buildings that give nothing to the street. And at the ground level, where we experience the city, most of these new buildings give us a vinyl garage door–or as in the above photograph a wall of strange, unsettling gates–for the pedestrian, a slap in the face.

In her column last week, the Inquirer’s architecture critic Inga Saffron made the point that parking garages deaden the downtown street. But the effect of inserting private parking into the neighborhood street is still more pernicious, for there is likely less at play to counteract the detrimental anti-urban effects.

One the reasons the curb cut is relatively easy to insert into our neighborhood streets is also why it’s so detrimental to Philadelphia’s urban rhythm: the relatively intimate scale of the street. With almost no grand neighborhood boulevards, we rely for street life on the small play: the flower box, the architectural detail, the window display, the bench. The curb cut interferes with that wonderful rhythm, and turns what might be a rewarding walk into a stroll to nowhere. 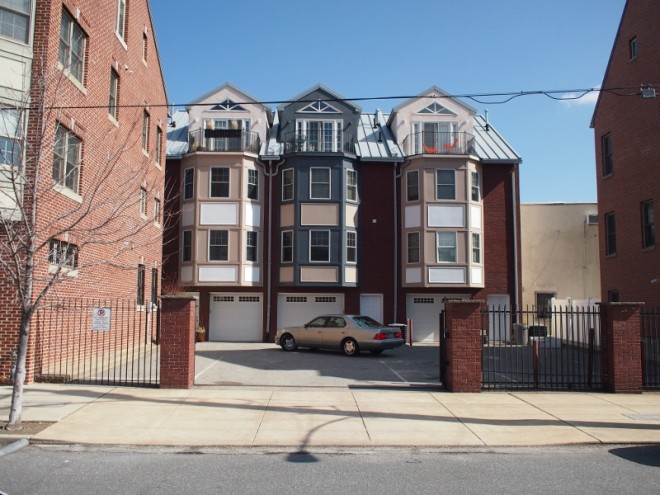 In the last decade particularly, dozens of “curb cuts” for private garages have been granted in Bella Vista. This was the case principally because until the new zoning code, a curb cut was required by law (the idea was to remove the burden of extra cars from the street). But the garage, which acts like a repellant to street life, was also unfurled as a weapon of control: for Bella Vista, endowed with South Street and the Italian Market–part of a powerful urban concentration I called in Song of the City “the bazaar”–was dangerous and offensive, vulgar and hot, loud and lurid, disturbing and rippling, violent, gritty, ribald, and strange. In other words, it was a fascinating and alluring place to live. But the neighborhood was also suffused with drugs and addiction and organized crime and a great deal of shouting, cancers that were spreading from the bazaar onto the quiet upstanding “residential” streets around.

The garage was a useful antidote for what had become by the mid-1990s a fearful time. Architecture here and all across the city was used to defend, not to invite or invigorate. But times have changed. Not only is the curb cut no longer legal for new development in Bella Vista, but residents and business owners who moved to the neighborhood because it was lively and dense and interesting want to retain that character despite the damage that’s already been done. Such was the sentiment at a recent neighborhood meeting, when a curb cut on Bainbridge was proposed. (I was one of many who spoke out against the garage; the Zoning Board of Adjustment has yet to issue its ruling on the case.)

Now, two more garages have been requested for two row houses to be built near the corner of Eighth and South Streets. No really first rate city would consider private house garages immediately adjacent to a major shopping street, but that hasn’t stopped the owner of the parcel from requesting them. He will undoubtedly claim that he won’t be able to sell the houses for enough money without the garages. But why should taxpayers subsidize his bottom line when he is taking away one of our neighborhood amenities, public parking, and ultimately reducing the value of the neighborhood itself? It doesn’t have to work that way, for the buildings that are built there really should make our neighborhood more attractive, more lively, and more interesting.

I was struck by the conversation in the comments on our article about the proposed development that would replace the Third Regiment Armory on South Broad Street. Readers lamented that so few people concerned about strong urban design showed up at the meeting to voice their concerns about what is truly a terrible, reactionary development proposal. Well, if you care about strong urban design for a key neighborhood along the border of Center City and South Philadelphia and believe as I do that additional curb cuts are dangerous for the health of the city, then I encourage you to attend the community meeting about the proposed development at Eighth and South. That meeting will take place at Palumbo Rec Center at Tenth and Fitzwater Streets next Tuesday, March 12 at 7:30.