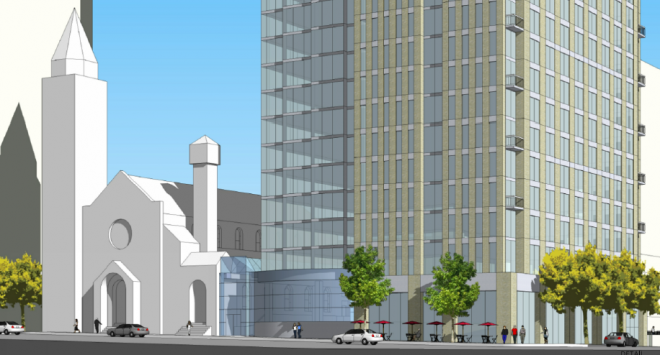 In what appears to be a proactive move by the Preservation Alliance for Greater Philadelphia, a deal has been reached to guarantee the long-term preservation of the Episcopal Cathedral on 38th Street in West Philadelphia.

The deal, formed by the Cathedral, the Preservation Alliance, and the Radnor Property group, will allow Radnor to build a residential tower on 38th and Chestnut. The Preservation Alliance will withdraw its opposition to the approved demolition of two historically registered brownstones on the church’s property that will make way for the tower.

Proceeds from the development of the tower will fund the continued preservation of the Cathedral, the center of the Episcopal Diocese of Philadelphia, which was designed by prolific architect Samuel Sloan and enlarged later after a 1902 fire by Philadelphia architect Charles M. Burns.

The decision to make the agreement comes not without controversy. “Although the Alliance recognizes the good intentions of the Historical Commission in reaching its decision, it has serious reservations about the Commission’s interpretation of the law and the procedures followed in this case,” said Preservation Alliance board chair Marian A. Kornilowicz. “Nonetheless, the Alliance concluded that an appropriate settlement would be in the best interest of all parties and we were able to accomplish that. This agreement includes a detailed 50-year plan or program for the preservation and restoration of the Cathedral building as well as the commitment by the Cathedral to the Cathedral Building itself, to implementing the preservation plan, and to funding the plan including all necessary work and maintenance. It also contains a mechanism for the funding including the payment into escrow of $2.1 million to cover the immediate work and the generation of approximately $1.3 million through operations and/or financing for future work.” 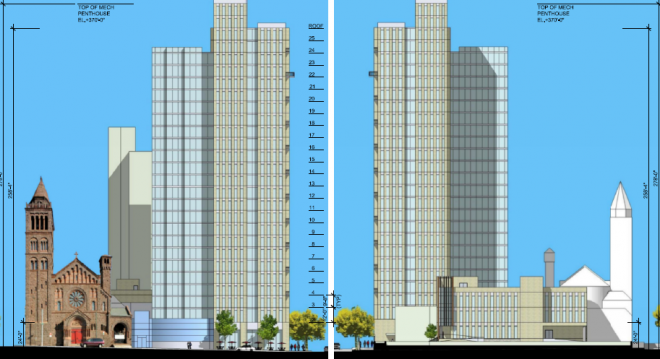 The agreement reduces the possibility of a lengthy legal appeal of the Historical Commission’s decision to allow demolition of the brownstones for reasons of “public interest.”

It also means the tower, to be designed by BLT Architects, will be the fourth major residential tower to be planned in West Philadelphia. There is concern that the design of the tower, as Hidden City pointed out last June, live up to the architectural significance of the Cathedral and the urban potential of the major intersection of 38th and Chestnut.