Awaiting A New Call To Service In Mantua 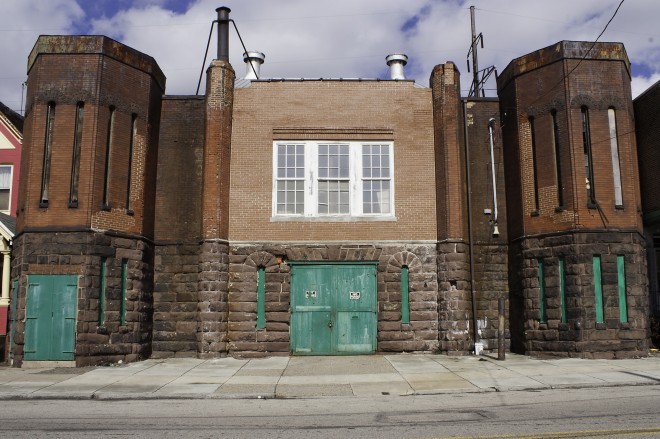 Out on Mantua Avenue, standing as a forlorn outpost grown from the city’s ties to the Civil War, lies the former Keystone Battery Armory.

Created in 1861, the Keystone Battery started as a volunteer infantry company and later formed into a light artillery battery. After fighting many battles in the Civil War, the unit moved back to Philadelphia, re-organized, and was accepted into the Pennsylvania National Guard.

The Keystone Battery’s first armory was located at the former home of the Philadelphia Polytechnic College at the corner of Market and Merrick Streets, today the site of Dilworth Plaza. Peter F. Rothermel’s famous painting depicting the Battle of Gettysburg was created here, using members of the Battery as models. In 1875, the Battery rented the long-lost Warner Hall on the 600 block of North Broad Street and stayed there until losing their lease in 1881. With membership and morale at an all time low, the Keystone Battery faced a choice: either fold as an organization or build a new armory that could potentially boost their popularity and numbers. They chose the latter.

While staying in temporary quarters at the Allison Car Factory at 32nd and Chestnut, funds were gathered and locations scouted for a new, modern armory that could be the Keystone Battery’s permanent home. After the initial attempt failed, the Battery moved to the Asbury Methodist Episcopal Church near 33rd and Chestnut. Three years later, a second attempt was made, this one a tad more successful. A plot of ground was purchased at the corner of 33rd and Marston Streets (now Smith Walk on the University of Pennsylvania campus), designs were laid, and construction began. While digging the foundation, workers discovered layer after layer of human remains. As it turns out, this site was used as a potter’s field during 1837’s Yellow Fever epidemic. While work progressed, the University of Pennsylvania approached the Battery and offered to take this plot of zombie-rich soil off their hands. They sweetened the deal by offering much more than the Battery paid for the site. The land later became part of the Franklin Field superblock. 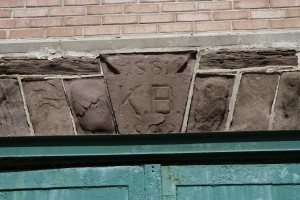 Now with ample cash on hand, the Keystone Battery could finally see its armory dream through. A 65′ x 100′ property on the 4100 block of Mantua Avenue was acquired and an architect, known only as A. Green, was commissioned. In 1892, the new armory was ready. The design was an 11,960 square foot Late Gothic Revival structure of granite and brick described by contemporaries as “grim and warlike in appearance.” Two stair towers with medieval-style Arrowslits flanked the façade. The Battery’s keystone-shaped insignia decorated the wide entryway accentuated by iron bars. This would be the Keystone Battery’s first Armory actually used as one. Their previous locations served only for meeting and commiserating. Until theirs was built, the Battery stored their artillery in other armories.

The new armory proved successful. Membership rose so quickly that the Battery was forced to kick out other organizations, such as the Bicycle Riding Academy, who rented space in the building. By 1900, the Keystone Battery was not only a military organization, but also a civil one called Light Battery “A,” Philadelphia Artillery. After fighting in the Spanish-American War and resisting the Coal Strike of 1902, the unit grew in numbers to the point that they were ready to abandon their Armory by 1903…and after all that trouble spent to create themselves a home. The Battery ultimately moved to the old Brigg’s Riding Academy at 23rd and Chestnut in 1906. All told, they spent only 14 years at the Mantua Avenue location.

After sitting empty for a few years, the building was purchased by one J. Dillin, who turned it into a gun store named, appropriately, the Armory. Around 1915, the old Keystone Battery Armory went back into military use. The Pennsylvania National Guard’s Sixth Infantry took over the building and used it for the next two decades. In 1922, they commissioned famed city architect Phillip H. Johnson to design an expansion for the building, making it 300 feet x 400 feet. Of course, this would have been impossible: the Pennsylvania Railroad right-of-way abuts the rear of the property.

In the late 1930s, the old armory became home to a New Deal agency. The National Youth Administration made the building their Philadelphia Center from 1939 to 1943. The NYA employed what they called “out-of-school youth” in part-time repair and service positions that included job training. The Philadelphia NYA Center also hosted local neighborhood clubs and organizations.

Later, the M. Schoenfeld Company moved in and distributed tobacco products from the late 1940s through the mid-70s. A decade of abandonment after that, the building became an extension of the Stukes Center, a care facility for children and adults with intellectual and developmental disabilities, whose headquarters were just around the corner on 42nd Street. The old armory became the organization’s diagnostic and therapeutic center. The Redevelopment Authority took over the property at the end of the 1980s and sat on it until 2005. 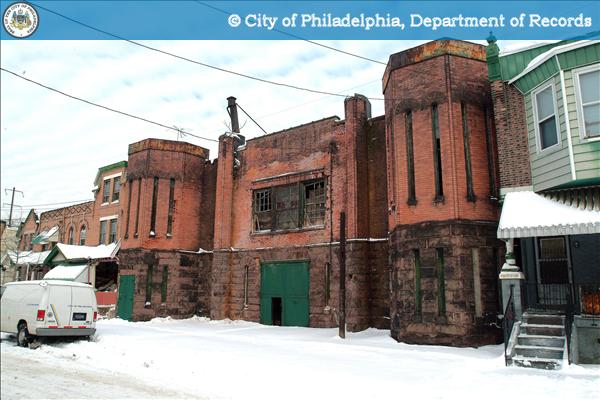 Over that time, the building fell into disrepair. Windows stood broken, the interior was trashed, the roof failed. The once-stately armory became a leading specimen of blight in the neighborhood, preserved by neglect. In October of 2005, T.J. Properties, a local company that converts old houses into affordable apartments, acquired the property and worked to restore the structure. The roof was re-sealed, the front window and chimneys were replaced, and the interior was adapted for reuse.

Despite all of those improvements, the old armory’s exterior remains in a sorry state. Though some re-pointing has been done, other parts of the brick façade are crumbling. The stone at the base has holes large enough to stick an arm through. The arrowslits, along with some other windows, are boarded up. Located next to the forever-closed 41st Street Bridge on the western edge of the Bottom, the Keystone Battery Armory is in need of salvation–while there’s still time. 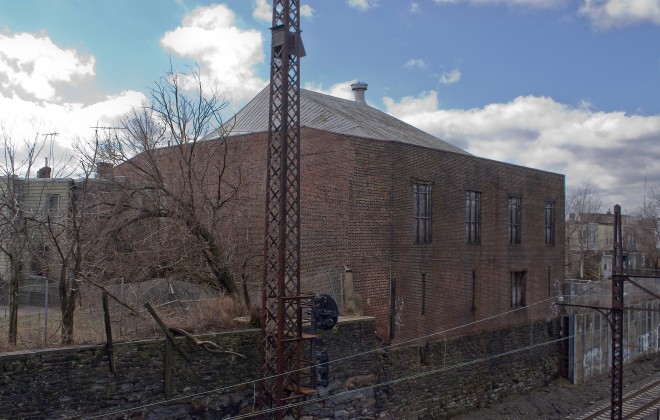 Rear of the armory facing the railroad tracks. Check out the roof. | Photo: Richard Gonzalez