At Coltrane House, Getting Closer To The Dream

Editor’s Note: We’re closely following efforts to restore and repurpose the John Coltrane House in Strawberry Mansion. What follows is Christopher Mote’s report on the latest developments at the neighborhood level and with planners, preservationists, and jazz historians who imagine creating a place of lasting cultural impact. For our first two articles, both by Rob Armstrong, click HERE and HERE. These stories are being published in concert with the international website All About Jazz. 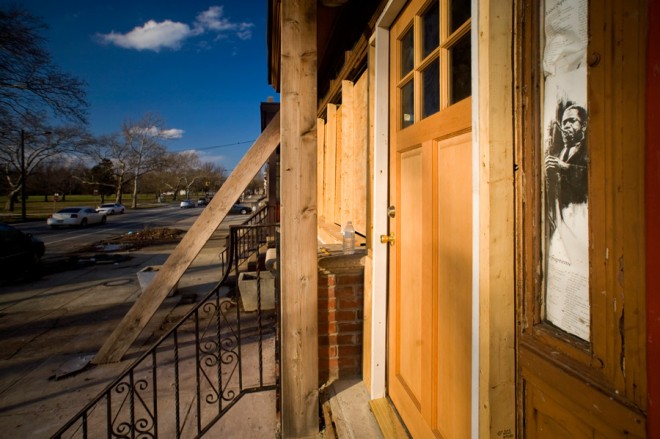 In some ways, John Coltrane’s house is like any other in Strawberry Mansion. The three-story, Dutch-gabled row home where he lived from 1952 to 1958 was seen as desirable by North Philadelphia’s ascendent black middle class, literally across the street from verdant Fairmount Park and tied in closely to the city’s burgeoning jazz scene.

After decades of decline, there are signs of renewed investment in Strawberry Mansion, a neighborhood still beset by poverty and crime. Many classic houses are crumbling; vacant lots abound. Still, the former Coltrane residence at 1511 North 33rd Street, while vulnerable to the risks of age and abandonment, endures as a symbol of the city of Philadelphia’s rich music culture. The house—a National Historic Landmark—is the focus of preservation efforts to commemorate the jazz icon’s legacy and serve as an asset to the community.

The house was the site of Coltrane’s “spiritual awakening,” according to collector and biographer Yasuhiro Fujioka, which triggered Coltrane’s quest for God and informed his most path-breaking compositions. “Fuji,” as he calls himself, discovered Coltrane 7,000 miles from Philadelphia, while growing up in Osaka in the 1960s. Initially a Beatles fan like most Japanese kids, he found himself transformed by Coltrane’s wildly iconoclastic and technically demanding playing style.

Forty years of “Chasin’ the Trane” have made Fuji the world’s foremost collector of Coltrane memorabilia: over 2,000 items make up his private collection in Osaka. He is currently on the board of directors of the Coltrane Home in Dix Hills, Long Island, where the musician lived until his death, and where many of his archives remained. While in the US to compile research for his next Coltrane book (he’s written or co-authored four others), he was in Philadelphia to participate in a planning charrette that could offer a new direction for Coltrane’s Strawberry Mansion home—and even see a sizable portion of that collection return to live in the house where Coltrane learned music and later transformed his life.

Two events in March—a community workshop for residents and music lovers in North Philly, and the charrette that joined the forces of experts from disparate fields of music and museum interpretation—marked the conclusion of an eight-month process, conducted by the Preservation Alliance for Greater Philadelphia, of sowing the seeds to a successful institution in the form of the Coltrane house.

The community workshop revealed the equal yet opposing truths in remembering John Coltrane: as a singular voice that spoke the universal language of music (one that a kid from Osaka could understand), but also as one that arose from a specific musical tradition bound up in the experience of African Americans who like Coltrane had come to the urban north as part of what historians call the second great migration.

“Music helped our people through trying times,” said one participant. “For us, music is a means of survival, a way of escape, away from oppression.”

The workshop was held at the Martin Luther King Recreation Center on Cecil B. Moore Avenue, the former Columbia Avenue, which once boasted dozens of jazz haunts in the 1940s and 1950s, some of them witnesses to Coltrane’s presence. Neighbors at the workshop acknowledged jazz as an acquired taste whose history was in danger of being forgotten, due in part to cuts to music programs in neighborhood schools.

“When you teach young people music, it changes them,” said Veronica Underwood, a professional singer who runs a music school at her home a half-mile up 33rd Street. “Music has its own etiquette for how to interact with others. That’s something that young musicians today don’t understand, the camaraderie; it’s up to the older generations to introduce that to them.” 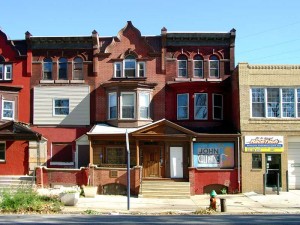 In addition to stories and testimonials and an impromptu performance by Underwood herself, attendees were invited to vote on how they wished to see the house preserved. “Museum,” “community center,” “performance hall,” and “music school” were some of the most popular choices. Near the end of the workshop, the house’s owner, Lenora Early, stopped by to review the community input.

“I was pleased to see the pieces put in place for the neighbors to be able to give their feedback,” said Early, the founder of the nonprofit John Coltrane House, which also owns the house next door and is considering how to incorporate it for community purposes. Early, a retired school teacher, is an organizer of the annual Odunde Festival on South Street.

After moving to New York, Coltrane continued to rent the Strawberry Mansion house to his cousin, Mary Alexander—the inspiration and namesake of one of Coltrane’s best-known numbers, “Cousin Mary.” The house transferred to her after Coltrane’s death at age 40 in 1967.

Early’s husband, Norman Gadson, a jazz enthusiast who also worked in real estate, bought the home from Cousin Mary in 2004, but passed away a few years later, leaving Early to continue the preservation initiative. While her original plan was strictly to save the house as a private residence, she soon became interested in the benefits of preserving much more than just the physical structure. 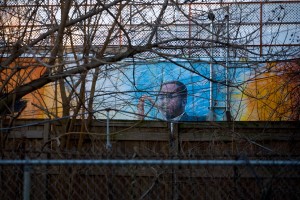 A mural of John Coltrane in his former back yard peeks over neighboring fences | Photo: Bradley Maule

It was Cousin Mary’s advocacy that led to the house’s listing as a National Historic Landmark—one of only 67 such sites in Philadelphia—in 1999. Early sees her ultimate goal as the product of the work that Cousin Mary continued in the spirit of Coltrane, including the backyard garden that she kept up as a gathering place for outdoor concerts. (Now 85, Alexander has been in an assisted-living facility since being incapacitated by a stroke in 2005. She was among those honored by Mayor Michael Nutter at Jazz Day 2012, a celebration on the Coltrane house block last April.)

But first there remains the task of stabilizing the 1904 row house, to save it from the same decay that plagues many houses in the neighborhood. “The house looks decrepit from the outside, but it’s not falling down, although it needs that extra vigilance,” said Early, who is overseeing a staff of volunteers to handle maintenance issues. “Homes like this were built with integrity; they said a lot about how people thought in those days.”

Parallel to Early’s endeavors, the Preservation Alliance has coordinated the focus groups through a Planning/Preservation Grant from the Pew Center for Arts & Heritage. The Alliance’s task is to devise set of guidelines that the nonprofit John Coltrane House can work with to begin implementing a feasible plan.

“Professionals and residents alike have been very willing to share their thoughts,” said Melissa Jest, the Preservation Alliance’s neighborhood preservation program coordinator. “It is because of this impressive level of public participation that the Alliance is confident it will be able to provide the owner and stewards of the Coltrane house with useful and insightful recommendations.”

During his years in Strawberry Mansion, Coltrane perfected his style on tenor saxophone that jazz critic Ira Gitler famously described as “sheets of sound.” He recorded with a who’s-who of jazz legends including Thelonious Monk, Sonny Rollins, Jimmy Smith, and Miles Davis. By 1957, Coltrane was a bandleader releasing records under his own name.

It was the same year that Coltrane, having kicked a heroin addiction that was crippling his productivity, experienced the spiritual awakening that would motivate him to the end of his short life, and which he credited as the inspiration for his masterpiece, 1964’s A Love Supreme. His devotion to Eastern musicians like Ravi Shankar was especially ahead of its time, as “Fuji” Fujioka noted, eclipsing his beloved Beatles by several years. (Rubber Soul, the first Beatles album to feature the sitar, came out the same year of the birth of Coltrane’s son, Ravi, whom he named in Shankar’s honor.) 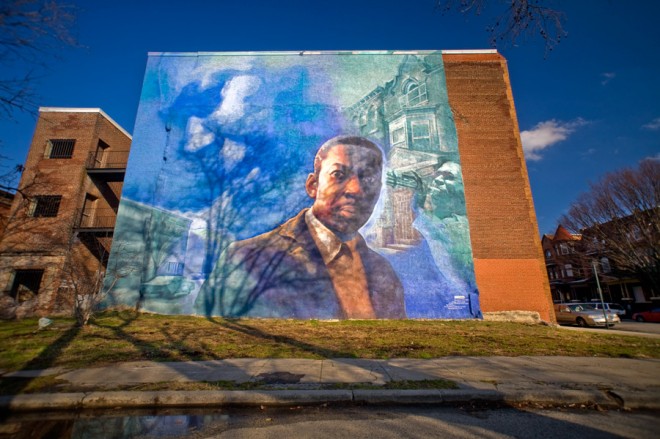 The legacy of John Coltrane looms large in Strawberry Mansion; this mural is five blocks north of his former home on 33rd Street | Photo: Bradley Maule

At the charrette, the experts assembled spent the day harmonizing optimistic visions for the house with the undeniable challenges of making them happen. Franklin Vagnone was one of those who found it necessary to provide a few reality checks.

“The thing you always hear at these events is, ‘Well, we have something unique’,” said Vagnone, representing the Historic House Trust of New York City which administers 22 house museums. “Everyone thinks that what they have is going to be different. The question is, is it unique enough? The challenge is how it’s going to pay for itself.”

Dennis Montagna, from the Philadelphia office of the National Park Service, added that many museums struggle because they forget about the entertainment factor: “They approach it in a self-referential way when really, the kids are looking to go see stuff.”

“We think of the educational aspect,” agreed Vagnone, “but for everybody else it’s a fun day. Those kids are out of the classroom making memories that will stay with them throughout their lives.”

Montagna also commented on the difficulty of coexistence between historic house sites in close proximity to each other, especially in an economic downturn. “You don’t want to have to compete,” he said. “You have to be looking for the tide that’s going to raise all the boats.”

In spite of the challenges, there was progress. Tanya Bowers from the National Trust for Historic Preservation was on hand to facilitate the process. 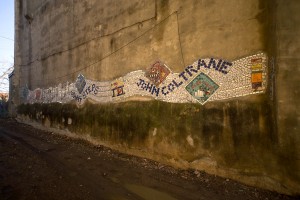 Tucked in a makeshift alley on the wall of the house two doors down, a collaborative mosaic by the Coltrane Society and Network Arts celebrates the chronology of John Coltrane’s catalog, referencing My Favorite Things, Blue Train, and Kind of Blue, the seminal Miles Davis album on which Coltrane played tenor sax | Photo: Bradley Maule

“This was an extremely productive day,” she said. “Definitely the experts we have here complemented each other well, and we now have the beginnings of a blueprint for how the mission of the Coltrane House can be realized.”

So what shape might that plan take? Not even Michael Cogswell, a jazz musician turned musicologist who now directs the Louis Armstrong House Museum in Queens, could say for certain. Each house has its own formula for success, he said. But that was no cause for worry.

“I don’t want to sound too mystical,” he said, “but this is my view as a museum director: the house will tell you how to interpret it. The answer is right in front of us. It’s like Michelangelo’s belief that every block of stone has a sculpture inside, that it’s up to the sculptor to chisel it out. The answer is already there, in the house, and we have to discover what that is.”

Most crucial to interpreting the house will be the history that lives within the members of the community. “It’s the intangibles that matter, the stories, the neighbors who remember, who interacted with Coltrane,” said Bowers. “These people are still with us, but they won’t be forever, which is why this needs to happen now.”