A City Charter In A Box 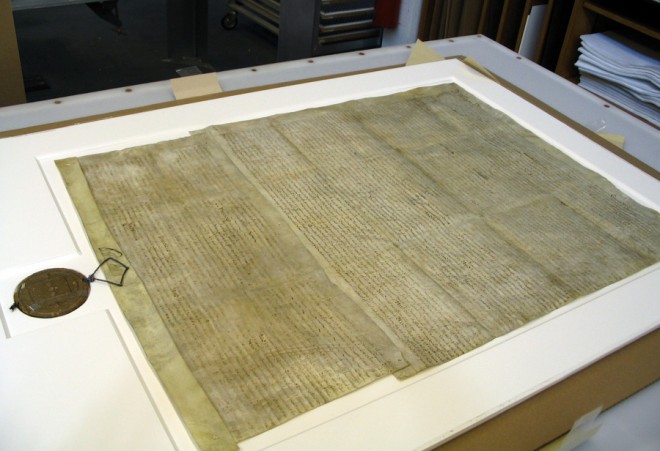 Sealed with a dream: William Penn’s signature and seal on the original City Charter | Image courtesy of the Conservation Center for Art and Historic Artifacts

On the “Five and Twentieth day of October Anno Dom 1701 And in the Thirteenth Year of the Reign of King William the third over England,” William Penn put quill to parchment and signed his name to the Charter of the City of Philadelphia, bringing into legal existence the City of Brotherly Love “as it is layd out Between Dellaware & Skoolkill.”

With that beneficent act, Penn turned on his plainly buckled heel, boarded a ship for England, and was never seen this side of the Atlantic again. The Charter of 1701 remains the oldest record related to municipal government in the City’s archive. While the government Penn envisioned remains only in faint shadows in the current scheme of government, the Charter document has survived, and now, over three hundred years later, it remains remarkably well preserved—a tangible link to the founding of the City—and stashed away in a box at the City Archives. 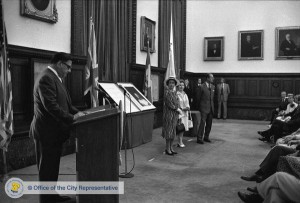 From the start, the Corporation Penn established was overmatched by the Pennsylvania Assembly. The Assembly, which had been created by Penn’s better known and more liberal Charter of Privileges, sat in Philadelphia and had a tendency to meddle in the City’s affairs. By comparison, the powers of the Corporation’s appointed Mayor, Aldermen and Common Councilmen were quite limited. Perhaps due to Penn’s desire to retain control over the revenue stream from his colony’s largest city, the Charter granted the Corporation no power to tax. Instead, it was forced to raise money from such rents and fines as it could collect from the citizenry, or donations it could beg of its members. Without an effective source of funding, the government was hobbled by its inability to provide the services demanded by the growing city.

The Corporation limped along for seventy-five years, becoming more self-interested and estranged from the needs of the inhabitants of the City, as the Assembly swallowed ever more of its functions. Finally, in 1776, reflecting the revolutionary democratic sentiment of the moment, the Assembly delivered the final stoke, declaring the Charter void and abolishing the offices of its Corporation. Commonwealth Justices of the Peace governed the City until a new Charter was ratified in 1789.

If the Corporation was not constructed to last, the physical Charter itself was just the opposite, penned on two fine sheets of parchment measuring 36 ½” x 26 ¾”, in iron-gall ink. The larger of these two sheets was folded over at its bottom, creating a small pocket—known as a plica—on which Penn signed the document and attached his seal, made of red wax and attached with a blue cord. The smaller “addenda” sheet was then stitched to the front of the larger and tucked into the pocket at the bottom.

Following the abolition of the Corporation, the Charter document quickly fell from public view. There is little recorded mention of it for the next half century, aside from an occasional reference in laws passed by the Select and Common Councils (the City then having a bicameral legislature, imagine) established under the new charter. These mentions typically related to the use of vacant land or boat landings reserved for public use in the Charter, in addition to setting up a government, the document deeded space for use “as a Free Common of Pasture.” It is unclear where the actual document was kept during this time.

The first transcription of the Charter appears to have been printed in 1851, perhaps indicating renewed interest in the founding accompanying the movement to consolidate the outlying townships of Philadelphia County, an effort which expanded the City from “Dellaware & Skoolkill” to its modern boundaries in 1854. Four years later, in 1858, the Councils passed a resolution thanking one J.E. McClees, a photographer of some prominence in the mid-nineteenth century, for “a handsome photographic copy of the original charter of the city.” Although this would seem to suggest that the City did not have the actual document, in 1874 the Inquirer reported that the City had transferred the Charter “for safe keeping” to the custody of the Board of Managers of the National Museum, housed in Independence Hall. 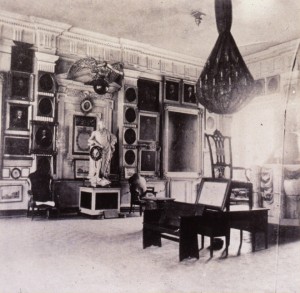 This museum was the creation of one Frank M. Etting, a lawyer and active member of the Historical Society of Pennsylvania who, in the years leading up to the Centennial celebration in 1876, had commandeered the first floor of the Hall and transformed it into a hodgepodge of portraits of the Founding Fathers, antique furniture, and assorted historical curios. Among these varied artifacts, according to Etting’s history of Independence Hall, the Charter was “encased appropriately, and displayed between the likenesses of the Grantor and the commemorative painting of the Treaty that made it feasible.”

A few years later, in 1895, the earliest known facsimile of the Charter was printed in a book of Philadelphia history. The black and white image shows the Charter in what appears to be its original form, with the addenda sheet attached to the larger sheet, and the pocket intact. It also shows fold lines, the document at some point prior having suffered the indignity of having been folded up in quarters length-wise and thirds in width.

The Charter suffered an indignity of a different sort in 1908, when an ad hoc committee appointed by the Mayor to investigate the founding of the City issued a report dating its creation to 1683, the year Penn’s surveyors first laid out the City, and recommending that the year 1701 be removed from the City seal. The Councils promptly passed an Ordinance amending the seal, and with the same breath “appointed a committee to . . . arrange a plan of celebration” for a 225th anniversary it had previously not known was upcoming.

It is not clear when the Charter departed Independence Hall or where it went. Most of the exhibits assembled by Etting remained in the Hall until at least 1898, when a major renovation to restore the Hall to its original design was conducted, and the museum was removed. Some of the better known portraits by Charles Willson Peale survived the general purge and were hung in the second floor of the Hall, and there is some suggestion the Charter may have been placed there as well. Unfortunately, the few photographs showing the area in which these portraits hung do not show the Charter. Another seemingly reliable account holds that the Charter went to the American Philosophical Society, however the Society has not been able to find any record of possessing it.

The next clear reference to the document came in 1936, when a Council Ordinance noted that the Charter was being transferred to the Pennsylvania Historical Society for safekeeping. This deposit was to be short-lived however, because the political changes in the early 1950s, with the election of the first Democratic Mayor in seventy years and the successful Home Rule Charter movement, focused new attention on the original Charter. The City requested that the document be returned in 1954. 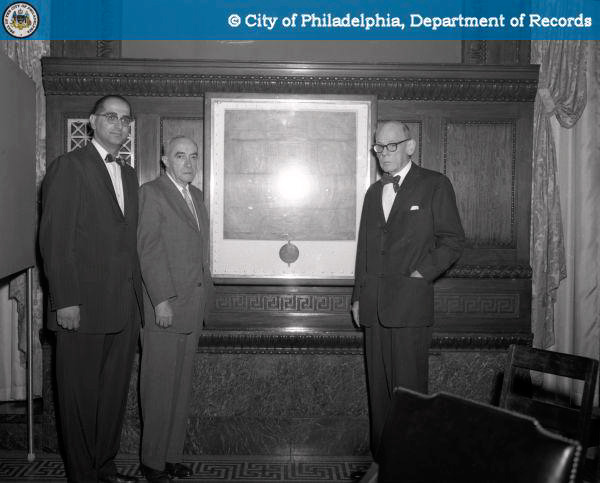 We’re so excited! Public Property Commissioner William T. Gennetti, with Grant Simon of the Historical Commission and an unidentified third man, at the unveiling of the Charter at City Hall, 1960. | Photo: PhillyHistory.org.

Upon its return, the Charter was installed in a handsome fluorescent bulb lit case and placed on display, first in the Mayor’s Office in 1955, and then, after an official unveiling in 1960, on the North wall of the Mayor’s Reception Room, adjacent a similarly framed copy of Thomas Holme’s well known 1683 map of the City. 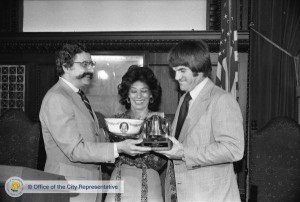 The Charter then remained in the formal Reception Room for over thirty years, a frequent, though generally overlooked backdrop in photo-ops for such notable visitors as Grace Kelly, Pete Rose, Muhammad Ali, and even Queen Elizabeth, who was posed before the Charter for a greeting by Mayor Rizzo during her Bicentennial visit in 1976.

When Ed Rendell came to office in 1992, he appointed V. Chapman Smith to be Records Commissioner, and requested that she conduct an assessment of the City’s historical holdings. At this time the City’s archives were kept in the City Hall Annex (now a Marriott Hotel) and by all accounts were in deplorable condition. Smith, who now heads the National Archives Mid Atlantic Region, recognized the importance of the Charter, and felt that its location between two windows and a heating duct in the Reception Room was taking a toll on the document. The Charter was taken down, sent to a conservator for a touch up, including cleaning, flattening, mending of tears and consolidation of ink, and then secured in the archive, which under Smith’s leadership was transferred to its current home at 3101 Market Street. 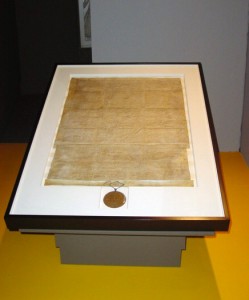 On display at the Atwater Kent Museum, 2006 | Image courtesy of the Conservation Center for Art and Historic Artifacts

For the next fifteen years the Charter remained hidden away in the Archives. For a time, apparently for lack of anything else to do with it, the Charter hung in a room used for training staff and interns. Then, in 2006, the Charter was requested for an exhibit by the Atwater Kent Museum, now called the Philadelphia History Museum.

According to Records Commissioner Joan Decker, when requested by Atwater Kent, the Charter was evaluated and found to need further restoration. The document was transferred to the Conservation Center for Art and Historic Artifacts, where conservators cleaned its surface, replaced matting, and sealed the parchment in a new frame to protect it from extremes of temperature and humidity, as well as UV rays.

They also noted that in a prior conservation effort, the Charter had been severely altered, with the pocket cut from the original document and moved to allow the smaller addenda to be inserted above the signature and seal. It is not clear when this cut was made, but it is noted in the conservation report from 1993, indicating that it likely pre-dated its hanging in City Hall. While the alteration was likely a well intentioned change to allow the entire Charter to be read sequentially, altering historic documents is not in keeping with best practices of conservation today. The removal of the smaller sheet does reveal a noticeable difference in fading, a sort of document farmer’s tan, between the previously covered and uncovered sections.

After the conservation, the Charter was taken by police escort to the Atwater Kent Museum where it was exhibited for a year as part of “How Philly Works: Streets as Barometers of Urban Life.” There the Charter hung beside such other City treasures as “the wampum belt believed to have been given to Penn by the Lenape tribe,” a 1750 waywiser used to measure consistent city blocks, and “a pushcart used on the streets by Freihofer’s Bread Company in 1900.” 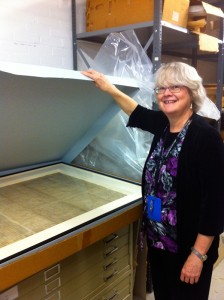 Upon the conclusion of the exhibit, the Charter was returned to the City Archives, where it now sits, in a box, under a sheet of plastic and several rolled up posters, in a room housing many of the City’s older more fragile records.

Sadly it appears this is where the Charter will stay, making it difficult for Philadelphians to view the document that created their City. Commissioner Decker notes that while her Department is not selfish with its holdings, there are serious concerns related to both security and preservation that mandate that the Charter not be displayed publicly for too long at a stretch.

While these concerns are no doubt valid, it can only be hoped that this treasure will not sink back into obscurity amidst the other records of the Archives. In a City with many historic relics, this document, signed by William Penn himself, deeding Philadelphia to Philadelphians, deserves a special place.

The full text and a brief note about the Charter by Commissioner Decker are available HERE (PDF). 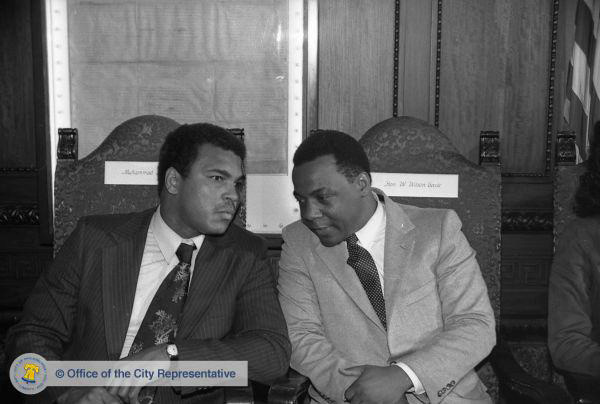 The Charter & the Champ: Muhammad Ali with Managing Director (and next Mayor) Wilson Goode, 1980 | Image: Office of the City Commissioner