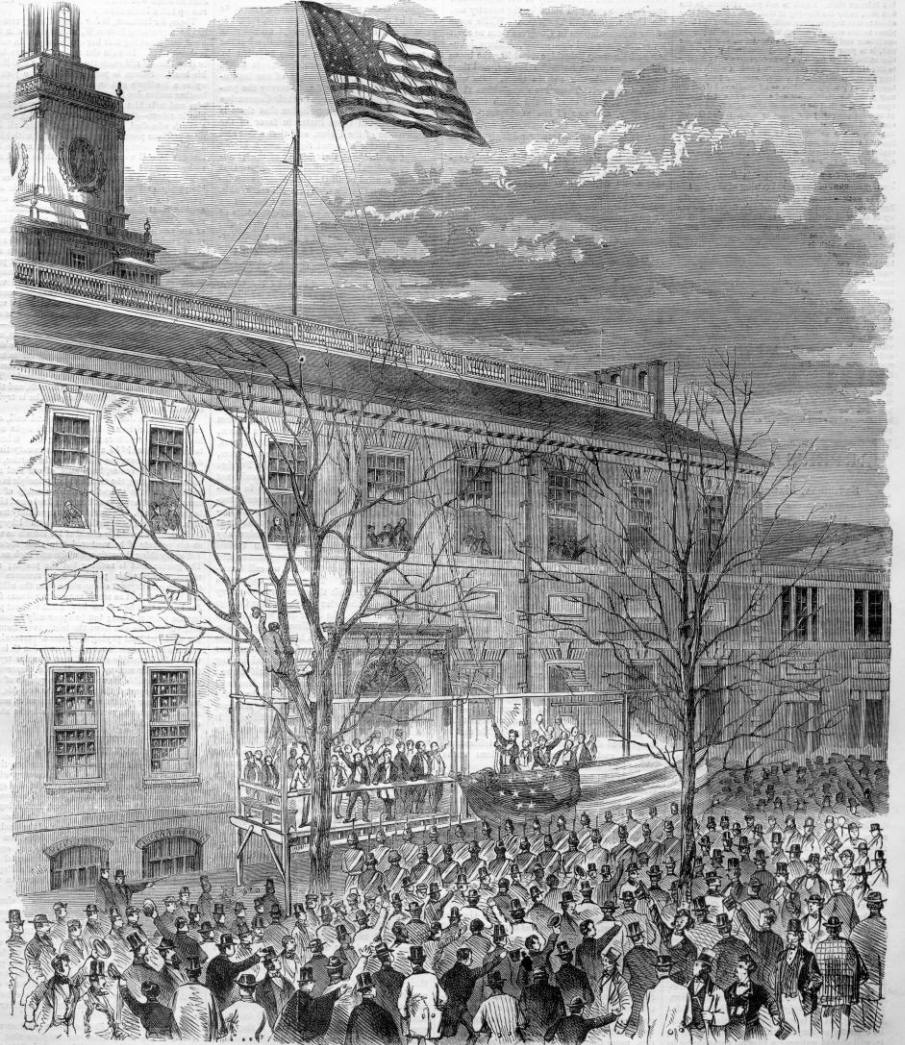 The front etching from the March 9, 1861 edition of Harper’s Weekly

Friday—George Washington’s birthday—was the 152nd anniversary of the day that Abraham Lincoln, with his eager young son Tad by his side, climbed the steps of a platform erected above the Chestnut Street entrance to Independence Hall, and promised the jubilant crowd that the nation would survive only as long as the people cultivated “the spirit that animated our fathers, who gave renown and celebrity to this Hall.” Lincoln then urged the crowd to cherish “that fraternal feeling which has so long characterized us as a nation.”

On the tail end of a national tour leading up to his inauguration on March 4, 1861, Lincoln knew full well that the setting would provide, as historian Harold Holtzer says, “a perfect stage for a symbolic reaffirmation of national principles.” Indeed, Lincoln’s words to the Philadelphians present betrayed some awareness that those months of the Great Secession Winter–when seven states of the Deep South had already left the National Union to form the Confederacy–constituted yet another moment by which the American narrative would hinge. And Philadelphia, with its Independence Hall, would once again provide for apt spatial symbolism.

The President-in-waiting had arrived in Philadelphia from Trenton the prior afternoon. At the Kensington Station of the Philadelphia and Trenton Railroad, throngs of well wishers greeted their next leader with a flare that “surpassed everything which he had yet experienced in the way of popular demonstration.” 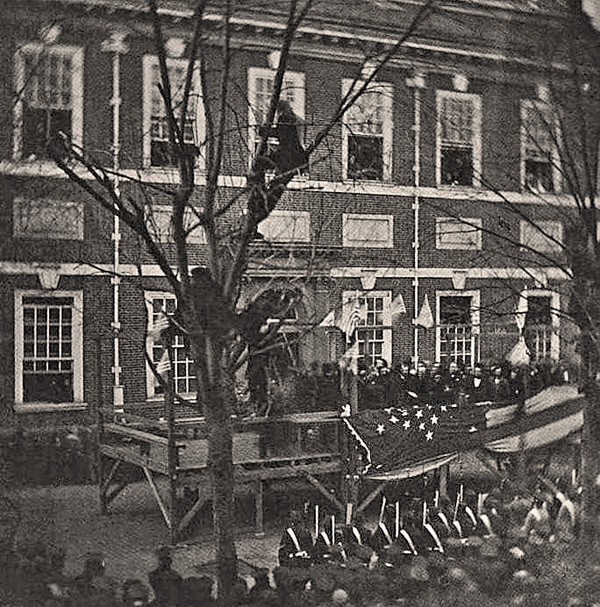 Some 100,000 “old men and young men, wives and maidens, matrons and children,” stood “anxious for a sight of the hero of the hour,” said one Philadelphia paper. Lincoln next traveled in an open barouche to the Continental Hotel at Ninth and Chestnut Streets.

Only a year old, the Continental had already established itself as one of the country’s preeminent hotels. The Italianate building had an elevator and enough room for a thousand guests.

At 10PM, the city’s sky was lit by a brilliant fireworks display, yet Lincoln would not enjoy the spectacle for long, as his aides took him aside for a briefing on a feared assassination attempt by pro-secessionist mobs in Baltimore upon the tour’s announced arrival in the border-state city. Lincoln grudgingly accepted the wisdom of his handlers, agreeing that he would travel through Baltimore in the dead of night.

Expecting only to speak to the crowds outside, Lincoln was forced to speak extemporaneously when asked to give a few words to city leaders in the Hall’s Assembly Room the next morning, yet the orator of the Gettysburg Address was up to the task.

“All the political sentiments I entertain have been drawn,” he told them, “from the sentiments which originated, and were given to the world from this hall in which we stand. I have never had a feeling politically that did not spring from the sentiments embodied in the Declaration of Independence.”

He then ventured outside to take to the platform and share with the crowd just what those sentiments were.

“It was not the mere matter of the separation of the colonies from the mother land; but something in that Declaration giving liberty, not alone to the people of this country, but hope to the world for all future time. It was that which gave promise that in due time the weights should be lifted from the shoulders of all men, and that all should have an equal chance.”

Undoubtedly reflecting upon the previous night’s revelations at the Continental, Lincoln asserted that he “would rather be assassinated on this spot than to surrender” the Declaration’s perpetual principles.

Harper’s Weekly described  the scene in the necessarily bombastic verbiage of on-site reporting of the time:

The excitement was of a fearful character when the President-elect seized the rope to hoist the flag of the country to the crest of the staff over the State House. The souls of all seemed starting from their eyes, and every throat was wide. The shouts of the people were like the roar of waves which do not cease to break. For full three minutes the cheers continued. The expression of the President-Elect was that of silent solemnity. His long arms were extended. Each hand alternately pulled at the halyards, and a bundle of bunting, tri-colored, which had never been kissed by the wind before, slowly rose into the sky. If the shouting had been fearful and tumultuous before, it became absolutely maniacal now. From the smallest urchin to the tall form which rivaled the President’s in compass of chest and length of limb, there rose a wild cry… Suddenly, when the broad bunting had reached the summit of the mast it unrolled at once, and blazed in the sunlight. At the same moment the band struck up the Star Spangled Banner, and a cannon ranged in the square sent up peal after peal.

The occasion struck a few as auspicious. The President-elect for one, told the Pennsylvania General Assembly later that day in Harrisburg that when “the cord was pulled and it flaunted gloriously to the wind without an accident, in the bright flowing sunshine of the morning, I could not help hoping that there was in the entire success of that beautiful ceremony at least something of an omen of what is to come.”

He was right; the symbolism was spot-on. His hoisting of the Stars and Stripes would prefigure his steady guidance of the Northern war-machine as it successfully reasserted national authority across all of the land. The words of liberation and equality set forth from the Hall beneath that flag would likewise be salvaged for future generations.

Some of his words, however, would come to pass more explicitly than any retrospective symbolization could provide. While he might not have been assassinated at Independence Hall on that day, Lincoln was murdered for standing by its principles. Four years later, making his final tour of America, Lincoln’s body would return to Independence Hall as it lay in state.