The Long And Short Of It 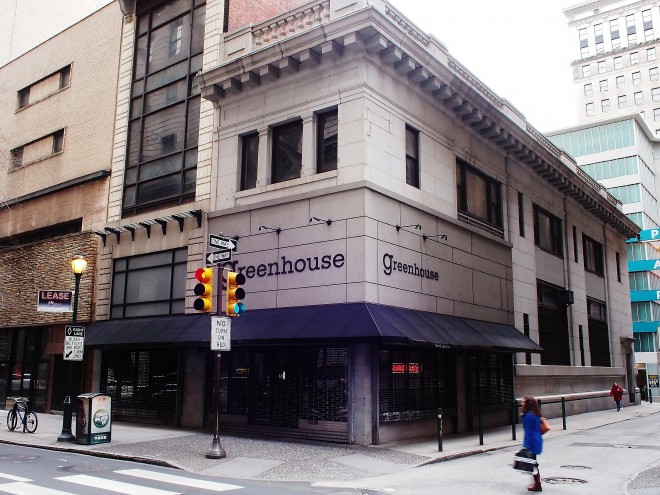 In the 1890s, the Tradesman’s National Bank of Philadelphia, which had been a city establishment since 1847, was ready to open its own trust company. After only a few years in operation, the new Tradesman’s Trust Company was already ready to build a tower in what was now the city’s central business district around the new City Hall.

The location they chose was 1324 Chestnut, a small plot at the southeast corner of Juniper and Chestnut. This new 12-story tower couldn’t just be any ordinary building. It would have to live up to the designs of Hale Building, Wanamaker’s Grand Depot, and Mint Arcade that inhabited the other three corners of that intersection. In September 1904, the best architects in the city were invited to compete for a winning design. Horace Trumbauer, the Hewitt Brothers, H. L. Reinhold Jr, the firm of Wilson, Harris, & Richards, Carl Berger, and the firm of Hale (Willis G!) and Morse were among those contacted. 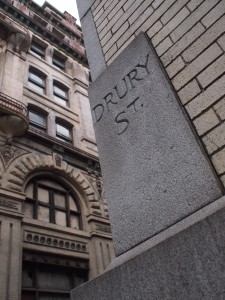 They probably ignored the Tradesman’s call, because the winner of the competition was one Lloyd Titus. Titus was a city architect that designed school buildings. The Tradesman’s Trust Company may be the only non-school building he designed. In May 1905, a call for bids was placed for the construction of a 12-story loft building. That September, the construction was contracted to Doyle & Doak, one of the most prolific contractors of the period, headquartered at the Hale Building across the street. New England Granite Works would supply granite for the facade.

But for reasons even the Shadow hasn’t been able to figure out, The 12 story plan was reduced to a two story one by the time construction began. This made the new building shorter than the three story grocery store it replaced.

The new 20 foot by 104 foot structure, clad in Woodbury Granite, opened on June 1st, 1906. The design, though short-statured, was impressive nonetheless. A small portico stood on the Chestnut Street side with “Tradesman’s Trust Co.” sculpted into the top. The roof was decorated with a ballustrade that remains today. Delightfully stylized street labels were imbued into the granite corners facing Juniper and Drury Streets. At the corner of Juniper and Chestnut, a lit-up sign on the building faced west, declaring the company’s presence to passersby on Broad Street.

In 1910, the Tradesman’s Trust was ready to make their original 12-story plan a reality. They commissioned the firm of Baker and Dallett to come up with the design.

Baker and Dallett’s plan completely changed the existing space (save the portico) and added a brick and limestone facade covered in bay windows. At the top three floors, there was to be a marble crown that included curved colonnades and a set of pitched-roofed portholes. This magnificent building would certainly compete with its neighbors for the eye of the passer-by.

Oh, but the grand thing never happened. The Tradesman’s Trust Company folded on September 18th, 1911. All assets were liquidated, including $45,000 the Commonwealth of Pennsylvania was holding there. After the Commonwealth got their money back from a surety company two days later, the failure of Tradesman’s Trust was used as an example for how safe the state’s funds were. The next October, the Attorney General of Pennsylvania appointed financier Percy M. Chandler with the task of tying up all of the company’s affairs and disposal of its assets. The trust company appealed this decision, but was dismissed by the Pennsylvania Supreme Court. Tradesman’s National Bank didn’t give up on having its own trust company. By 1928, a set of mergers made them into the Tradesman’s National Bank and Trust Company. They still survive today as part of PNC Bank.

In the latter half of 1914, the Pennsylvania Company for Insurance on Lives and Granting Annuities moved into the space, calling it their “Broad Street Office.” Their iconic headquarters on the 500 block of Chestnut Street, in the city’s old downtown, had felt too far from the action and the moved west, originally with a branch office in the Franklin National Bank Building at Broad and Chestnut Streets. Eventually, the firm wanted a building of their own in the area and so it commissioned Edgar V. Seeler, whose office was in the long-since-demolished Drury Building directly behind the old Tradesman’s Trust Company, to re-design the Tradesman’s building for their purposes.

By the 1920s, the 1300 block of Chestnut Street had become part of “Piano Row,” inhabited by a few dozen piano companies, stores, and manufacturers centered on the 1100 block of Chestnut. In 1926, the Leefson Conservatory of Music took over the second floor of the Tradesman’s Building, which it occupied for the next three decades. There, instructors not only taught piano, but also certified piano teachers. Strangely enough, the most famous alumnus of this small school was not a musician, but a mathematician–Ralph H. Fox, creator of the Fox n-coloring of knots, the Fox-Artin Arc, and the Fox derivative… whatever the hell those are supposed to be. 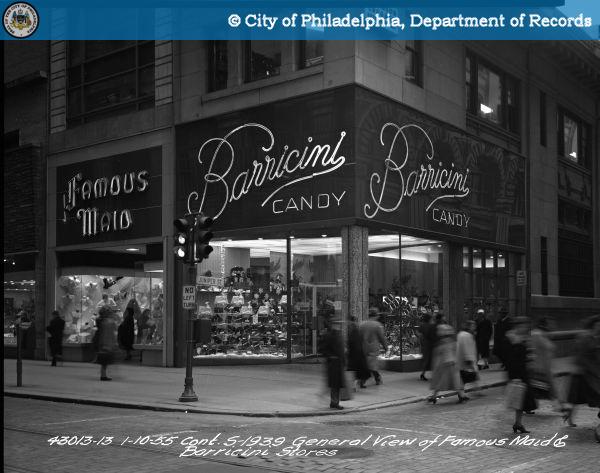 In the 1930s, following the Chestnut Street’s transformation into the city’s premiere shopping district of the mid-20th Century, the first floor of the old Tradesman’s Trust was made into retail space. The storefront featured a unique configuration: diagonal glass display with a single column in the northwest corner of the building. It kept this appearance well into the 1960s. By the time the structure was purchased by the infamous Sam Rappaport in 1986, the retail space had been combined with the building next door.

In 2000, the Greenhouse Food Market moved into the space and has been utilizing both floors of the old Tradesman’s Trust ever since. Though modernized, the most noted feature of the building continues to be the fanciful street labels on the southwest corner.