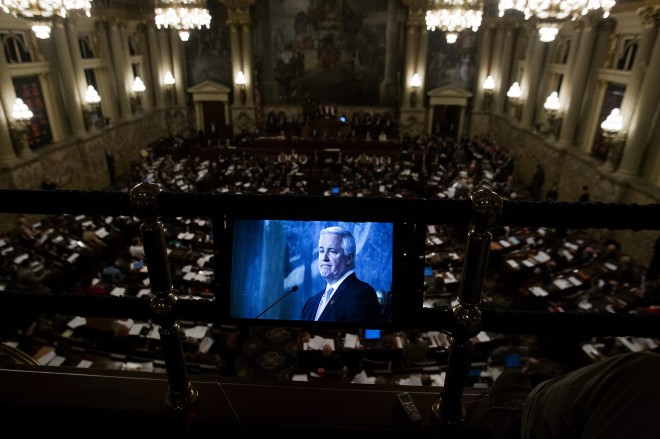 We don’t often wade into politics on this website. We deliver a fairly narrow band of news and analysis and we try, mightily, to keep our focus.

But sometimes, as in the case of Governor Corbett’s stupid, lazy, and cruel decision to reject the federally funded expansion of Medicaid to cover underinsured Pennsylvanians, we can’t hold back.

Our profession of writers, photographers, historians, journalists, designers, and community activists is filled with people who work stunningly hard for relatively little pay, no guarantees, and rarely–rarely–health insurance. At the Hidden City Daily, which is one small arm of the small non-profit Hidden City Philadelphia, we struggle to afford compensation for our writers and photographers, almost all of whom are freelancers in one way or the other. Health care insurance? Just don’t get sick–or injured.

The same goes for a growing population of people who work in food, technology, entertainment, the arts, retail, tourism, education…all fields including journalism that are rapidly innovating to meet new market demands and that employ younger people and immigrants–those among the most unlikely to be insured. The innovation is wonderfully productive for our economy–and practically the lifeblood of the “New Philadelphia”–but it comes at a severe cost: decent pay and health insurance.

President Obama’s Affordable Care Act rightfully compensates for that by expanding the Medicaid program to workers who can’t afford coverage. As he said in his second inaugural address, “The commitments we make to each other–through Medicare, and Medicaid, and Social Security–these things do not sap our initiative; they strengthen us. They do not make us a nation of takers; they free us to take the risks that make this country great.”

That is one great country minus a bunch of recalcitrant and simpleminded states, including Pennsylvania. For though the federal government will pay for the vast majority of the costs associated with Medicaid expansion and though Pennsylvanians will pay through their federal taxes for it, they won’t be eligible to receive the aid unless Governor Corbett is forced to change his mind. Last week, he told the US Department of Health and Human Services no thanks.

That’s turning down some $17 billion in federal aid and leaving 750,000 Pennsylvanians without health coverage they would get if they lived in any other state in this region of the country (and that they’re paying for anyway). Let me be clear: this is a radical ideological move that puts Corbett in league with Rick Perry of Texas and other severe right wing governors.

In a column Sunday morning, the Inquirer’s Karen Heller calls the move by Corbett “brutally wrong.”

But it’s worse than that, for in some oblique fantasy of ideological purity, Corbett once again is stupidly turning away massive funding that will improve the lives and health outcomes of people who need it most (while giving callous lip service to giving incentives to employers to provide health care coverage). He did the same hear no evil routine early in his term by choosing not to tax the out of state oil and gas companies that are extracting our natural wealth and turning it into their own profit. And meanwhile, by choosing not to tax natural gas extraction he forced public school districts to cut programs, staff, and educational opportunities.

All this reeks to me of a fundamentally lazy governor who can’t be bothered to leverage real economic and political opportunities because they might necessitate a creative realpolitik and an entrepreneurial and active public sphere. While he wants the rest of us to innovate, the Governor sits on his hands and tells us real solutions don’t meet his 19th century taste test.

The upshot, of course, is that the best and brightest writers, culinary innovators, artists, photographers, technologists, and entrepreneurs will take their brains and their guts elsewhere to some other state that will support them while they take chances. Meanwhile, Governor Cruelty will finish out his days in the cornfield mansion waiting for the imaginary jobs to come to come rolling in.

Note: It doesn’t have to end this way. E-mail Governor Corbett at Governor@pa.gov or call (717-787-2500) the Governor and tell him rejecting Medicaid expansion in Pennsylvania is unacceptable.