South Broad, North Broad, And The Rite Of Spring 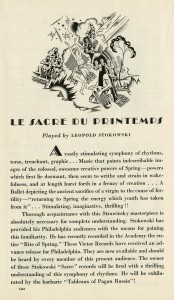 “The Rite of Spring” was originally a ballet production. Its world premiere in Paris on May 29, 1913 was an epochal event in the history of the performing arts. Audience reaction to the groundbreaking piece was tumultuous, with a near riot breaking out in response to the challenging music and provocative dancing. Igor Stravinsky’s musical score to the ballet eventually came to be regarded as a masterpiece, one of the most influential compositions of the twentieth century. “The Rite of Spring” is now most often performed as a concert piece and as such has become a staple of the orchestral repertoire.

Leopold Stokowski and The Philadelphia Orchestra gave the American premiere of the concert version of “The Rite of Spring” on March 3, 1922 at the Academy of Music. Stokowski gave an introductory talk from the stage prior to the performance, explaining that the music was meant to be accompanied by dancing and stage sets depicting Russian peasants celebrating the arrival of spring, culminating in the sacrifice of a young maiden. He said that he did not expect everyone to like or be comfortable with the challenging music, but that it was important that they experience this significant modern work. Critical reaction in the press was varied, with some reviewers recognizing “The Rite of Spring” as an important new form of musical expression and others denouncing it as so much primitive noise. Most critics agreed that the music suffered from not having the dancing and stage design elements that it was meant to accompany. 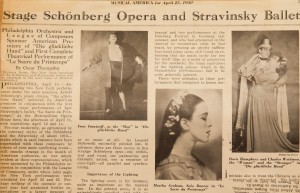 Coverage of US premieres of The Rite of Spring and Die glückliche Hand in Musical America, April 1930 Philadelphia Orchestra Archives

Leopold Stokowski and The Philadelphia Orchestra recorded “The Rite of Spring” for Victor Records in 1929, a recording made in the Academy of Music. On April 11, 1930, they gave the US premiere of the full staged ballet version of the piece. Produced in collaboration with the League of Composers, a New York-based organization, the program also included the American premiere of another modern musical theater work, Arnold Schoenberg’s “Die glückliche Hand” (The Hand of Fate). The Academy of Music, the Orchestra’s home venue, was not well suited for such a large-scale production so performances were given in Philadelphia’s Metropolitan Opera House at Broad and Poplar Streets, with subsequent performances in New York City’s Metropolitan Opera House.

Stokowski was intimately involved in “The Rite of Spring” 1930 stage production, from discussing aspects of the work with its composer Igor Stravinsky to helping choose the young, then relatively unknown dancer Martha Graham for the central role of the sacrificial maiden. The performances in Philadelphia and New York drew nationwide attention and critical reaction was almost uniformly positive. It was a triumph for Stokowski and The Philadelphia Orchestra, one of many during his 1912-1941 tenure.

Leopold Stokowski and The Philadelphia Orchestra gave the American premieres of other musical theater pieces by Stravinsky and Schoenberg in the 1930s, as well as those by Alban Berg, Sergei Prokofiev, and others. Most of these performances were in the Philadelphia Metropolitan Opera House, making this monumental building on North Broad Street an important center for new music in the early twentieth century.