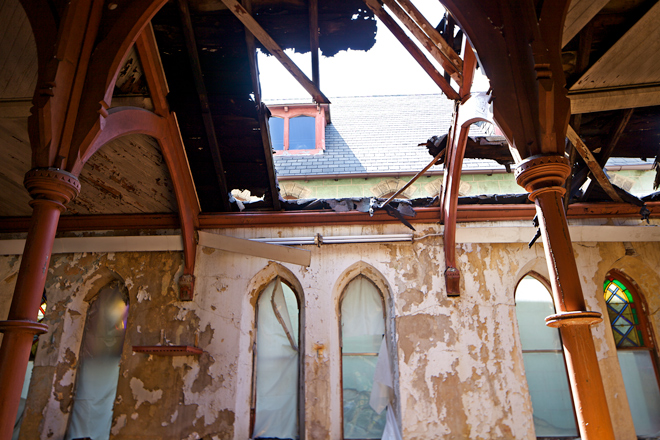 Editor’s Note: This is the first of a series of articles on preservation produced in collaboration with Grid Magazine for their March 2013 issue. That issue will be released tomorrow evening at a party at the Reading Terminal Market. For more information and to sign up to attend the party, click HERE. While the party is for fun–and it’s free–we’ll also be using it to help bring attention to a DIY preservation cause, the saving of 19th Street Baptist Church in South Philadelphia. The church, which was designed by the firm of Frank Furness, is rapidly deteriorating. If not for the effort of several who have sacrificed time and money to make short term repairs, the church would be certainly lost–just another piece of streetscape to fall through the preservation cracks. Aaron Wunsch, a preservation professor at Penn’s School of Design, will speak about the 19th Street Baptist project and gladly take your donation to help save it. Tomorrow, we will publish the magazine’s feature story on the disputed historic district nomination of Overbrook Farms neighborhood. In the coming days, look for a number of stories connected to that one, including a photo essay and an economic analysis of historic districts.

“Look around us—churches are dropping like flies,” says Lloyd Butler, a deacon at 19th Street Baptist Church in South Philadelphia. It’s a familiar story in a city with some 200 vacant churches; shrinking congregations can’t meet maintenance costs for their old buildings, which sit boarded up until the rare chance they might be reused. In some cases a developer will buy out the congregation, knock down the church and build new housing. Butler says he witnessed four demolitions last year alone.

But among endangered churches, 19th Street Baptist, designed by the firm of eccentric architect Frank Furness, stands out—as much for its green serpentine stone as the DIY strategy employed by the community to ensure the church’s survival.

Early photographs show the steeple reaching well over one hundred feet high, but today only a section of the tower’s stone base remains, and a fence cordons off the entire building due to the crumbling façade. When the Department of Licenses and Inspections threatened to demolish the church, a few members of the congregation decided their only alternative was to stabilize the structure themselves.

Typically, before repair work can begin on a historic building, a preservation plan must be in place, engineers must be consulted, and fully insured contractors vetted. These were simply untenable prerequisites for 19th Street Baptist, where large patches of sky were visible through holes in the church’s roof, and plants had begun to grow up from the rotting floorboards. “Those of us with trade skills, we got together and said, ‘Look, how do we keep this building from falling down?’” recalls Butler.

Aaron Wunsch, a University of Pennsylvania professor in historic preservation, explains that many of the city’s worthy buildings have been lost because their stewards wouldn’t roll up their sleeves. “There is such a thing as a grassroots, hands-on approach to preservation that necessarily complements the institutional approach,” he says.
Wunsch helped the congregation apply to the National Trust for Historic Preservation for a modest emergency repair grant. Then, last winter, Wunsch, Butler (a carpenter), parishioner Vincent Smith (an electrician) and Deacon Blackson filled a pick-up truck with sheet metal and lumber at Home Depot, and began to devise an ad-hoc system to patch the church’s roof.

Over a few weekends, and with under $5,000, they sealed the roof, buying time to raise funds for a formal restoration (former Mayor W. Wilson Goode has helped with fundraising efforts). “It’s true, one of us could have fallen off the roof as we stripped off the rotten asphalt,” Wunsch admits. But the risk has paid off—the building is saved.