Parking On Eakins Oval To Go Finally In Parkway Shift 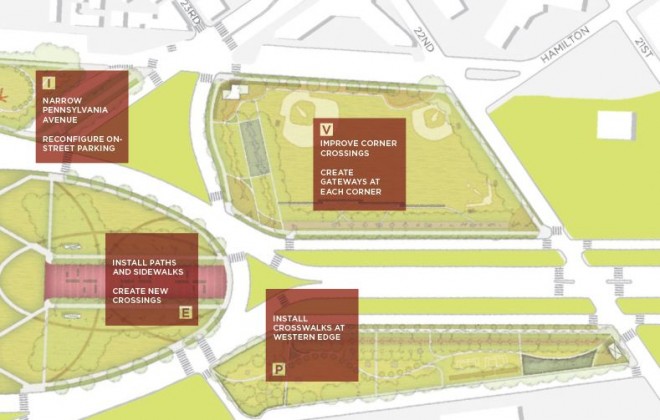 From “Action Plan” for the Parkway | Image: Penn Praxis

If the City of Philadelphia gets its way, by the beginning of the summer the parking lot on Eakins Oval will be gone. In its place: a shared, pedestrian focused space officials imagine using for concerts, revolving art installations, floral displays, and pop-up dining events.

The move, based on lessons learned at the Porch at 30th Street Station, is a clear gesture to improve pedestrian access and amenities along the Benjamin Franklin Parkway, topping the list of numerous low-cost improvements in the city’s latest Parkway action plan, “More Park, Less Way.” The plan, which is the result of an extensive community engagement process led by Penn Praxis and the Penn Project on Civic Engagement that sought ideas for improving the Parkway before the end of Mayor Nutter’s term in 2015, was officially unveiled last night at the Academy of Natural Sciences.

With its new flex space and increased pedestrian access via sidewalks, walking paths, moveable seating, and bike lanes, the new Eakins Oval is set to undergo the most dramatic change outlined in the plan, and is envisioned as becoming a key civic node that places the pedestrian experience in the fore.

“This is a very ambitious plan,” says parks commissioner Michael DiBerardinis. “It won’t cost a lot of money to implement but there will still be a lot of physical improvements.”

With Eakins Oval as the priority, improvements will focus on four open spaces in total, with the aspiration of luring more residents that live within a 10 minute walk (estimated at 70,000 people in total) to utilize the boulevard and its green spaces more often. DiBerardinis would not reveal sources of funding for the planned interventions.

Some improvements are fundamental. On the north edge, mending the divide between the Parkway and the Spring Garden and Fairmount neighborhoods is seen as a must. Narrowing Pennsylvania Avenue and clarifying parking spaces would pave the way for creating an accessible two acre, human-scaled neighborhood park on green space currently featuring Mark di Suvero’s massive sculpture “Iroquois.” 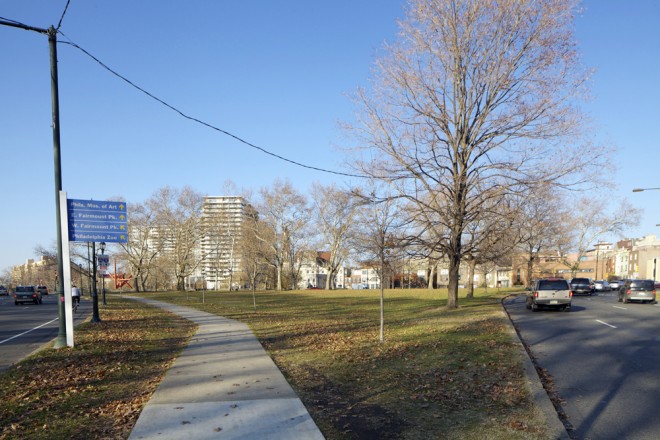 One of the underutilized public spaces targeted | Photo: Peter Woodall

At Von Colln Memorial Field, improved crossings at 23rd Street and Pennsylvania Avenue as well as the installation of gateway features will help solidify its place as the recreational hub for northerly neighborhoods.

Others changes focus on adding amenities to underutilized green spaces. On the southern edge, the plan’s call to action focuses on the three acre strip of land in front of Park Towne Place, reinvisioning the area as a mix of active and passive recreation with volleyball and bocce ball courts, chess tables, enclosed play areas, food kiosks, and restrooms.

Of the four areas, DiBerardinis is quick to note that each space’s treatment has yet to be designed, but he hopes at least two–Eakins Oval, and the Park Towne Place site–will immediately move forward into design and construction. 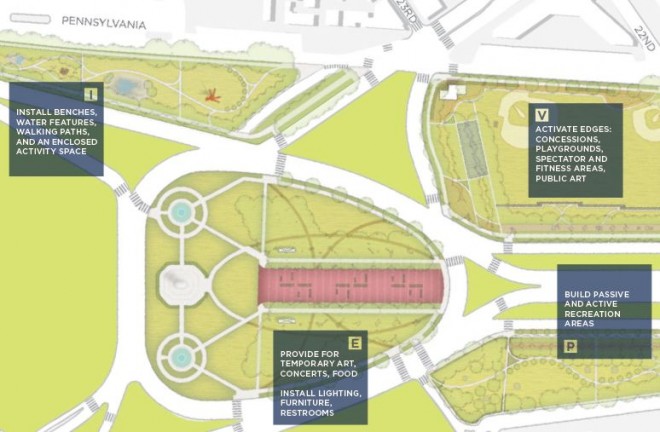 Planned investment in and around Eakins Oval | Image: Penn Praxis

Once complete, the new spaces will feature a series of unique, ongoing programmed events. With hopeful funding from the Parkway’s cultural institutions, the City will hire a Parkway manager to oversee everything from live theater performances on the “Iroquois” site to puppet theater at Von Colln, more Made in America-type festivals on Eakins Oval to bocce tournaments at Park Towne Place.

Planners say it will be critical to tie programmed spaces together with improved north-south crosswalks. Doubly important is expanding the Phlash transit system beyond a tourist-focused approach. Increasing service hours, changing vehicles types to appeal to more users, and tying the system into SEPTA interchange points are seen as small-scale, achievable interventions over the next few years.

These improvements will not be delivered in a vacuum; they coincide with numerous ongoing projects. Over the past decade, the City, alongside Center City District and Fairmount Park, together with the State of Pennsylvania and the Pew Charitable Trusts, have implemented millions worth of improved pedestrian crossings, bike lanes, lighting, street trees, park space and fountains, cafes, and programmable spaces such as Sister Cities Park.

With Paine’s Park under construction, more State funded improvements coming to the 1600 and 1700 blocks this year, and the massive reconstruction of Dilworth Plaza set to open next year, DiBerardinis says the Parkway has seen upwards of $80 million worth of investment in urban design in the past decade, with the renovation of LOVE Park and the capping of some parts of I-676 in front of the Central Branch of the Free Library still coming. All this adds up, DiBerardinis believes, to the largest investment in the Parkway since its construction a century ago.

The present “Action Plan,” he argues, “has a lot of ambition,” building off past momentum, connecting what has been done to what will move the Parkway forward, making it more inviting for an ever-increasing number of Center City residents. 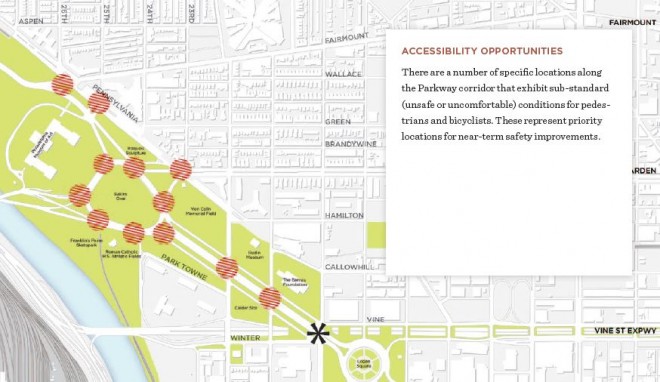 Despite this, some observers, including the Inquirer’s Inga Saffron, have noted critically that the small scale and incremental changes, though thoughtful, don’t alter the Parkway’s fundamental auto orientation. “The new plan shies away from confronting the fundamental design issues that are the source of the Parkway’s failure,” she wrote, in particular the dangerous lack of pedestrian connection between Eakins Oval and the Philadelphia Museum of Art.

For its part, the “Action Plan” recognizes its short-term, low-cost limits, an approach DiBerardinis says is necessary and grounded in economic realities due to ever shrinking local, state, and federal budgets.

Still, DiBerardinis expects the small interventions will have a big impact. “With 70,000 people [living close to the Parkway], it’s not a big leap to assume people will immediately begin using the new spaces.”