Lincoln On Celluloid, Lincoln In Bronze 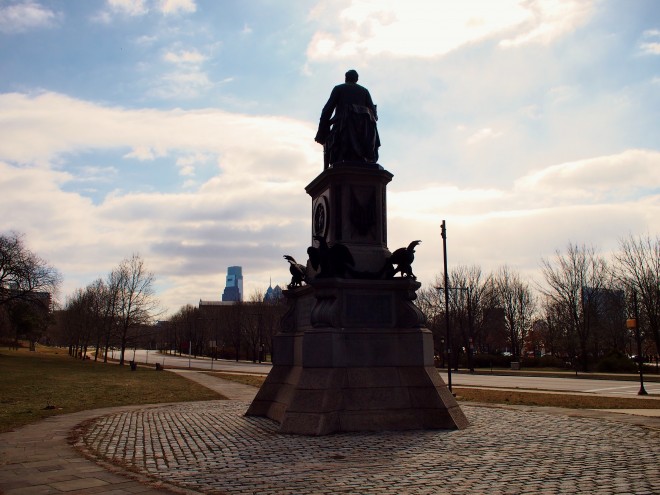 With Steven Spielberg and Tony Kushner’s “Lincoln” up for twelve Academy Awards this Sunday, I am reminded that Lincoln lives with us every day in form of, among other things, two monuments to the Emancipation Proclamation. While the film ‘Lincoln” seeks to place the passage of the 13th Amendment–the ratification of the Proclamation into law–in the frame of rather vulgar political horse trading, the monuments respond to the hopefulness and courage of Lincoln’s act.

Most people are probably familiar with Randolph Rogers’ “Abraham Lincoln,” located on the southeast corner of the Kelly Drive and Sedgeley Road intersection in East Fairmount Park, near Boathouse Row and the entrance to the Fairmount Water Works. Dating from 1871 but proposed weeks after his assassination in May 1865, it is one of the earliest memorials to Lincoln in the country. It is also one of the earliest pieces of public art erected anywhere in the city. Indeed, it predates the founding of Philadelphia’s Association for Public Art (formerly the Fairmount Park Art Association), the nation’s first public art organization, by one year. You can hear audio about the Lincoln sculpture as part of the Association’s Museum without Walls program HERE. 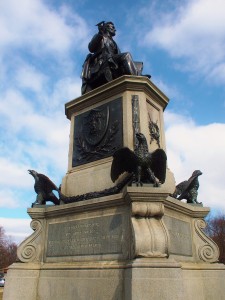 According to the sculptor, Lincoln is “holding in one hand the Emancipation Proclamation, and a pen in the other, his eyes are turned towards heaven, asking the Almighty his approval for the act. This was the great event of his life.”

The monument was sculpted in Rome in 1869 and cast in Munich the following year. In 1871, over 50,000 people attended the unveiling, including General Meade, victorious general of the Battle of Gettysburg, Philadelphian and one of the first commissioners of Fairmount Park.

Since then, the monument has mostly occupied a traffic circle on Kelly Drive, adjacent to its current location. After automobiles were introduced to Fairmount Park drives around 1900, with no crosswalk to access it, park users had little chance to interact with the piece. Today, after being relocated by the Philadelphia Streets Department in 2002 to ease traffic movement along Kelly Drive, it is more easily accessible . 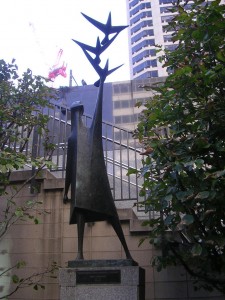 While “Abraham Lincoln” is certainly the most visible monument to Emancipation in Philadelphia, there is a little-known piece hidden in plain sight at the entrance to the subway Concourse on the northwest corner of 15th and Market. Thousands pass it daily. This is Gerd Utescher’s 1964 “Emancipation Proclamation Fountain.” Standing on the former grounds of the Pennsylvania Railroad’s Broad Street Station, it was erected as part of the redevelopment of this area after the demolition of the Station in 1953. While stylistically quite different from the Lincoln statue, this piece explicitly references the freedom of Emancipation, calling out to the office worker, the student, the shopper, and the tourist to look up to the sky and remember and reflect on the meaning of freedom.