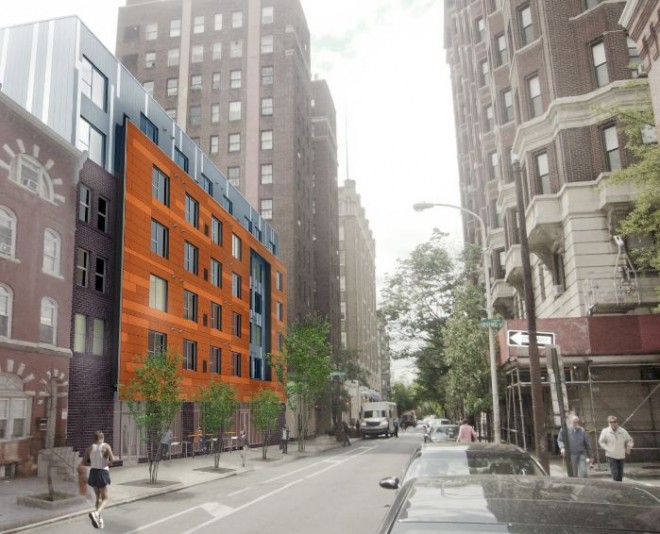 Construction is underway on what will be only the nation’s second affordable housing project geared to LGBT seniors (the first is in Hollywood, California), the $19.5 million John C. Anderson Apartments, on 13th Street near Spruce in Washington Square West. The 56 one bedroom unit multi-use project, developed by Pennrose Properties in conjunction with the Dr. Magnus Hirschfeld Fund, and Gay News publisher Mark Segal (president of the Hirschfeld Fund’s board), will be open by the end of the year. The building, designed by a team from the firm Wallace Roberts and Todd led by project manager Joe Salerno, replaces a parking lot and maintenance facility owned by the Philadelphia Redevelopment Authority.

“There were not a lot of models for this–there really weren’t,” said Pennrose project director Jacob Fisher about LGBT-friendly senior housing. “It feels like we’re living in an age when this kind of project can happen. We can see the change happening before our eyes and this is an exciting icon that people will see and talk about.”

A gay man, John C. Anderson was one of Philadelphia’s most highly respected and energetic leaders and a member of City Council in the early 1980s. He died at 41 of a chronic lung disease in 1984.

“This has been a long-range project,” said the 60 year old Segal. “I started looking at senior issues in the 1990s, trying to find out the needs of LGBT seniors. The first issue that was raised, and it really surprised me, was housing. I was blown away by the sense of need.”

Gay and lesbian elderly, often without children and grandchildren to care for them and now priced out of the neighborhood that’s been the center of the city’s gay life for decades, are the target for the apartment building, which is open by law to anyone.

“I’ve been trying to look into LGBT history, especially our pioneers,” said Segal. “I discovered that these people who had done all that work didn’t have a decent place to live. That probably was the strongest push making this project happen. It’s the community taking care of its most endangered.”

One region’s most experienced developers of affordable housing, Pennrose has built some 4,400 units of senior housing in past three decades and a half. The project, which was initially to be built on the property of and connected to the William Way Center, was funded largely by tax credits through the Pennsylvania Housing Finance Agency. It also includes a 1,900 square feet of retail or community non-profit space on 13th Street. Pennrose’s management division will own and manage the building, once it’s open. 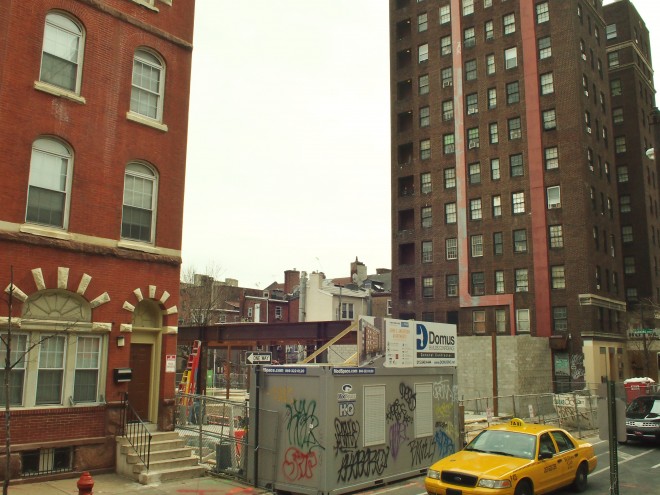 “From the neighborhood point of view, we’re excited to see life on block,” said the Washington Square West Civic Association’s zoning committee chair Carl Engerle. “It’s been a difficult block–the Parker Hotel next door is one of the biggest sources of problems in the neighborhood–and the parking lot provided zero activity.”

“The neighborhood has been so helpful, so forthcoming,” said Segal. “It’s been an incredible experience–I’ve never had anything like it: the neighbors, the City, the State, the federal government, everyone working together in such a focused way.”

While the Redevelopment Authority stipulated as a condition of the sale to Pennrose that the project would contain retail space, the civic association actively pressed for a use that would increase density and enhance the street vitality of the neighborhood (the civic association has raised some $120,000 to install pedestrian lighting on half the neighborhood’s blocks, and more is to come). They also strongly supported the project’s contemporary design, which is characterized by large windows (with low sills to allow residents to see easily to the street below) and an assemblage of variegated orange prefinished cement fiberboard panels. The four story panel assemblage, which will sit three feet off of the front wall of the building, is meant to help mediate the building’s scale in relation to its neighbors. 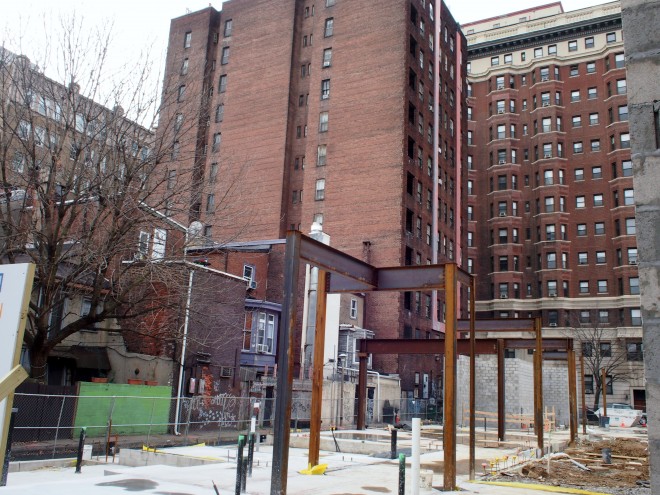 With frontage also on tiny but busy Camac Street, the building scale steps down to meet the intimacy of the street. Metal panels patterned after other neighborhood buildings designed by the architect Cecil Baker, who serves on the civic association’s zoning committee, frame the top story and the roof line.

In addition to the ground floor retail–Fisher said he’s open to ideas for it–the building will have a green courtyard, a partial green roof, and use five percent renewable energy. It will be given an Energy Star 3 rating, meaning it meets the US Environmental Protection Agency’s latest specifications for energy use.

Salerno said the exterior’s contemporary palette and materials are pulled through to the building’s interior spaces. “The intent was to make this much more contemporary than you would do in a typical senior housing project. It’s trying to be clean and modern and I think everybody feels good about that.”

Some of the green design stems from requirements of the Pennsylvania Housing Finance Agency, which also sets the size and configuration of apartment units and the size of the communal spaces. “PHFA standards are generally good ones, we wouldn’t reach Energy Star without it,” said Salerno. “The bad things you get with PHFA is that they set size of units and they’re not generous in any way. Their rules are aimed at trying to be sure people are not building what’s inappropriate for what the government is spending on. They also determine how quickly a project has to be put into service.” The tax credits, which were purchased by Wells Fargo, have to be used by the end of the year, meaning the project will be completed start to finish in 17 months.

“As an architect you get a lot of not so good projects over the years,” said Salerno. “It is an interesting and dense urban design challenge. The fact is that great opportunities like this one just inspire people like me to want to do more.”